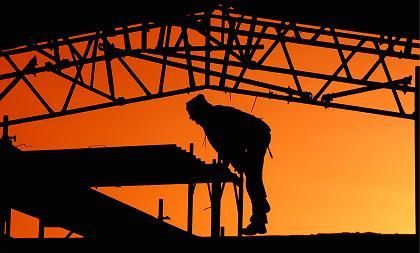 A construction worker climbing up scaffolding in Berlin. The economic crisis has engulfed most industries in Germany's largest economy.

In a bid to keep unemployment down in the economic crisis, Germany is considering setting up state-financed companies to take redundant workers off the payrolls of troubled firms temporarily, German newspaper Die Welt reported on Tuesday.

The idea will be discussed at a meeting of the Federal Labor Office, the government agency that pays out jobless benefits, on April 23, the newspaper reported.

So far, German firms have been resorting to putting workers on state-supported short-time working schemes to avoid redundancies despite drastic declines in orders in many industries. But many of those schemes will run out over the summer, forcing companies to make workers redundant.

Automaker Daimler is among many companies that have resorted to short-time working, but its CEO Dieter Zetsche warned last week that he could no longer rule out dismissals if the crisis persists.

The Federal Labor Office is considering setting up so-called "transfer companies" in which companies can "park" employees. Funded by the government, the transfer companies would pay workers 67 percent of their net salary for up to 24 months, and would also cover their social insurance contributions.

The transfer companies would also offer training programs for workers. The idea is that the workers' firms would take them on again once their business improves.

The proposal is supported by trade unions and employer federations, but it would have to be approved by parliament, and it's unclear whether it has the government's support. The Labor Ministry said it planned for now on extending short-time working schemes to up to 24 months.

So far, German unemployment stands at around 3.6 million, and has been kept down by short-time working schemes. But economists expect it to rise rapidly in the course of the year and some have said it could even reach 5 million in 2010.

Meanwhile, Germany's center-left Social Democrats (SPD), who share power with Chancellor Angela Merkel's conservatives in a coalition government, said they plan to call for tax hikes for the rich in the campaign running up to the September general election.

"The top earners profited more from the economic upturn in recent years than others," Foreign Minister Frank-Walter Steinmeier, 53, the SPD's candidate to become chancellor, told Bild newspaper on Tuesday. "In this crisis these very strong shoulders -- the absolute top earners -- can carry more than weak ones. We want to use the money for better day care and schools."

Merkel's conservatives oppose tax hikes and want to cut taxes after the general election. SPD party leaders will meet next weekend to decide on the outlines of their election manifesto.

Virtually every week, new economic statistics confirm that Germany is heading into its worst recession since World War II. Tuesday brought the news that German manufacturing industry revenues fell by 23.3 percent year-on-year in February, the biggest drop since records began in 1991.

The figures, provided by the Federal Statistics Office, showed a worsening from January when revenues had dropped 19.9 percent.

In view of the deepening crisis, the government has invited business and trade union leaders for talks on April 22 to assess the impact its stimulus measures have had on the economy so far. A similar meeting last December included the heads of Deutsche Bank, industrial group Siemens and Deutsche Telekom.

A government spokesman said the meeting agenda would not include the discussion any new economic stimulus program. But Frank Bsirske, the head of Germany's second-largest trade union Verdi, has called for a just such a program totalling €100 billion. The government launched two programs in December and January totalling €31 billion and €50 billion respectively, and Bsirske said the third one should be twice as large as the second.

He told the Associated Press that even the government no longer ruled out that the economy could shrink by as much as 7 percent, similar to the Great Depression when the German economy contracted by 7.5 percent in both 1931 and 1932.

"That shows how dramatic the situation is and how undersized the two stimulus programs passed so far are if measured in terms of that," said Bsirske, whose union has 2.2 million members in a variety of service industries.

The government is opposed to pumping fresh money into the economy for now and wants to wait for the programs it has put in place so far to take effect.