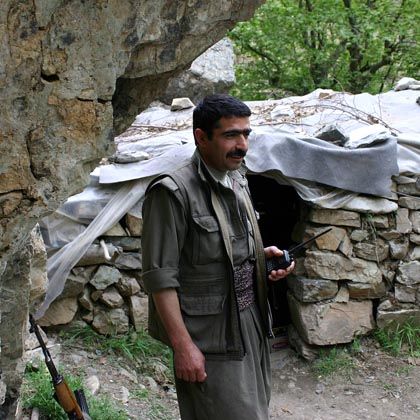 A Kurdish rebel from PJAK in northern Iraq.

No one knows exactly when Umut C., an inconspicuous building cleaner from the southern German state of Baden-Württemberg, became a fanatic Kurdish fighter. It must have some time in 2006 when the hip hop posters disappeared from his bedroom, followed by his dumb bells, and then finally himself. The last that Umut's grandmother heard from him were a few brief words over the telephone: "I have to go away now."

It seems very likely that the 21-year-old German-born Turk is now in the inhospitable mountains along Iraq's border with Iran. The young man from Göppingen is thought to be training as a guerrilla to fight against the Iranian army -- sent by the Party for a Free Life in Kurdistan (PJAK).

The group, which was only founded in 2004, has close ties with the successor organization to the banned Kurdish separatist group, the PKK, and now operates a militia in northern Iraq. PJAK troops have repeatedly launched operations inside Iranian territory and, according to the Kurdish group, more than 100 Iranian soldiers have been killed in clashes.

In Germany, the previously unknown group is now causing a considerable amount of disquiet -- amongst politicians and intelligence agencies. Last July, Tehran sent a verbal note to the German ambassador to protest about the alleged indifference on the part of the German government to the PJAK's "terrorist activities."

The Iranians are particularly annoyed by the fact that the political leader of the PJAK is a man with a German passport: Abdul Rahman Haji Ahmadi, who was born in Iran in 1941 and now lives in Cologne. When Ahmadi, an agricultural engineer by training, is not inspecting the troops in Kurdistan, he lives in an inconspicuous apartment in Germany whose walls are covered with images of Kurdish martyrs. It is from here that he coordinates what he calls the "freedom campaign" of the Kurdish people for "political and cultural human rights."

German security experts hold very different views of the PJAK. While the domestic intelligence agency, the Office for the Protection of the Constitution, says the PJAK's activities in Germany are barely worth mentioning, the Federal Prosecutor's Office has already launched an investigation -- although not against any specific individual. The prosecutor's office is investigating whether Ahmadi's PJAK is a "terrorist group," as defined by German law, and is taking a close look at its structure and members. 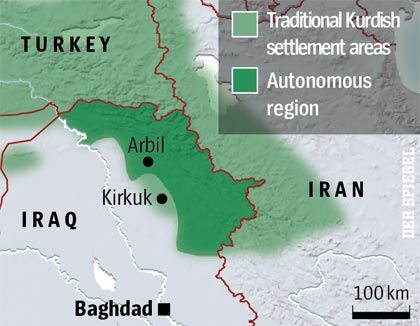 The Kurdish areas within Iraq and along its borders.

Ahmadi, however, rejects any terrorism allegations. He told SPIEGEL the clashes with the Iranian military were merely intended to aid the "self-defence of Kurds", who were "constantly being attacked" by Iran. He added that he hoped "democracy would be introduced in Iran."

Ahmadi also admitted there were "dead on both sides" and that it was "normal" for his followers to be armed with pistols and Kalashnikovs. Asked about an Iranian helicopter which is believed to have been shot down by the PJAK, Ahmadi explained: "That could also be done with a single shot." A uniformed guerrilla from Germany told the German TV show "Monitor" in detail about his Russian sniper-rifle and remote-controlled booby-trap training.

The actions of the so-called freedom fighters could have wider consequences for German politics than the mere exchange of diplomatic notes. A German security expert warned about the "nightmare scenario" of a PJAK partisan with a German passport being locked up in Iran. He says the German government would then have to offer consular support for its imprisoned citizen -- and would end up being dragged inadvertently into the Iranian crisis.

The German government's position is already complicated enough, as militias are of strategic use -- especially now -- to the United States. On the one hand they secure America's influence in northern Iraq, while on the other hand they destabilize the arch-enemy Iran and tie down its troops in impassable border areas.

Robert Baer, a former CIA operative who worked for many years in northern Iraq and who retains strong ties to the Kurdish political scene, told SPIEGEL: "I understand that the US provides intelligence to PJAK so that they are better able to protect themselves in any conflict with the Iranians. This force protection intelligence is given to them through the Delta Forces."

The German foreign intelligence agency, the Bundesnachrichtendienst (BND), is also interested in the PJAK: one of its agents has already visited Ahmadi.

But these kinds of associations are not much good for the party's public reputation. Instead, the party's members prefer to dream suitably propagandistic dreams about "the sun of freedom" in Persia. But when it comes to the fate of Umut C., the young Kurd from Göppingen, they are keeping quiet.