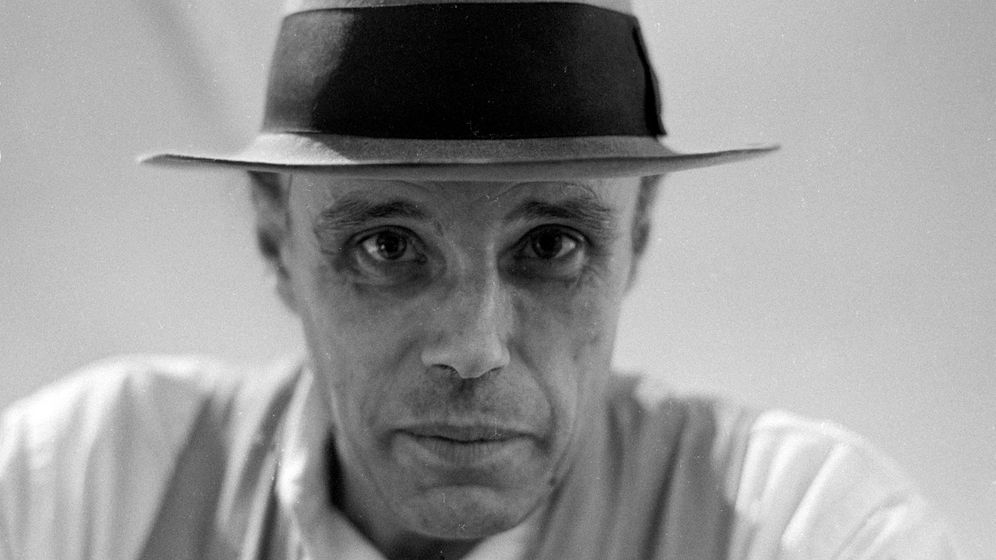 In the photograph, Joseph Beuys is still a boyish young German man in the uniform of a non-commissioned officer. He's standing at the edge of a group of soldiers, an almost proud-looking smile on his face. To his left is a pilot named Hans Laurinck.

Soon after this picture was taken, Laurinck would be dead. A previously unpublished wartime letter from Beuys provides insight into his death. The letter is in the possession of the Laurinck family, along with photographs, a flight log and other wartime correspondence.

According to the flight log, on March 16, 1944, Laurinck and his onboard companion, radio operator and gunner Beuys, set out twice on missions over enemy territory in their Junkers Ju 87 "Stuka" dive bomber. Laurinck and Beuys were young, both just 22 years old, and it is clear from Beuys' letter that they were aware of their youth. Their young age was the unusual thing about them, but the danger they faced was simply an everyday reality.

The two men took off at 7:15 a.m., landed at 8:35 a.m., then took off again at 11:05 a.m. Forty minutes later, this second flight ended in a crash. Beuys survived; Laurinck didn't. In the following decades, Beuys went on to become one of the most famous artists of the postwar period, and his wartime escape from death in Crimea came to serve as the starting point for all he created thereafter. It was the birth of a great artist -- and one that he fashioned himself.

As an artist, Joseph Beuys is seen as a moral authority, a veteran whose wartime experiences turned him into an antiwar advocate. Many of his works resemble war relicts, symbols of trauma. Such pieces made him a globally respected artist, who showcased his works multiple times at Documenta, Germany's major modern and contemporary art exhibition, which takes place once every five years in the city of Kassel.

At the same time, Beuys was a prominent figure in the peace movement and one of the first members of the environmentalist Green Party, an unconventional thinker who called for a new societal and economic system. Of course, no one understood precisely what kind of system that should be exactly. But it was generally assumed the system Beuys wanted was a better one. After all, he was Joseph Beuys.

The heart of the Beuys mythos was the March 1944 airplane crash. He later described that experience multiple times, refashioning it every time he told it. He told, for example, how he was rescued by Tatar shamans, who rubbed him with animal fat and nursed him back to health in a tent made of felt, wrapping his body in felt as well. Beuys also gave the impression that he himself had been the pilot of the bomber, and he claimed that his plane had been "hit by Russian artillery" before crashing.

For art historians, this war experience on the Crimean Peninsula -- or, more accurately, Beuys' subsequent versions of it -- became a founding episode of a new avant-garde. Years after Beuys' death in 1986, it emerged that many aspects of Beuys' account weren't true -- and that they actually couldn't be true. Nevertheless, no one doubted the artist's essential truthfulness.

The Letter of Condolence

But now comes the handwritten letter, signed by Joseph Beuys and postmarked by the German Reichspost on August 3, 1944. At first glance, it seems harmless enough, simply a young soldier composing a standard letter of condolence to the family of a fallen comrade, formulated in the typical wording of a soldier.

Yet this letter contains much more. In light of the event's later metamorphosis, it could actually be called sensational. It was clearly important to the letter's writer, even in 1944, not to appear an antihero beside the dead hero Laurinck, who was immediately awarded a posthumous Iron Cross 2nd Class. Beuys wanted, as much as possible, for the family of his deceased comrade to view Beuys' own survival as a stroke of wondrous fortune, rather than an injustice. And so, even in this early record of the event, it seems he began to understate some aspects and overstate others.

Letters of condolence from superiors and comrades were meant to provide comfort and solace for grieving family members, says Sönke Neitzel, a prominent military historian at the University of Glasgow. At the same time, though, these letters were also an instrument of propaganda, painting a picture of a brave, dutiful and well-liked soldier.

The logic of the times dictated that such letters could not present the true and oftentimes exceedingly brutal reality or the precise circumstances of a soldier's death. Doing otherwise could have caused surviving family members of fallen soldiers to question the war.

Beuys took these rules seriously. His letter reads almost as if he had been instructed to compose a letter -- but then it somehow expanded to fill nine pages. He addresses himself to Laurinck's mother and mentions that she had asked him for information, indicating that an earlier letter written from Beuys had never arrived.

In his letter, Beuys is quick to emphasize that he and Laurinck were friends. "As a crew, we were welded together by personal friendship more closely than was often usual," he writes. He also refers to Laurinck by his nickname, Hanne.

Beuys creates dramatic, yet vague images. He distorts the war, making it more innocuous. There is no mention of the death the dive-bomber was meant to visit upon those below, and he couches the dangers soldiers faced in positive terms: "In our youthful vigor, we believe ourselves always capable of conquering death, but we are still constantly surrounded by it. For this reason, we keep no secrets from each other, nor do we conceal our innermost thoughts from our other worthy comrades in any way," Beuys writes.

Beuys and Laurinck were not a well-practiced team. They only flew together in the same plane on two days: January 25, 1944, and then again on March 16. They set out that day as part of a formation, Beuys writes, but a snowstorm forced them to turn back. Since he and Laurinck were in the slowest of the planes, the Anton, they ended up being left behind. Then comes the crash:

We had been left behind.

We didn't speak much to one another.

Only sightings and things that were absolutely necessary for flying the plane blind. Neither of us thought things would end badly.

"Hanne, can you see anything?"

"No, snow is sticking to the windshield ... Damn!"

That "Yes" from Hanne is the last thing I remember of him.

We must have hurtled into the ground immediately after, or even during, his "Yes." The next thing I can remember clearly is the soot. Workers and women (in our territory) pulled me from the wreckage, cared for me, washed the blood from my face and, at my questioning gesture, gave me the news that Hanne, my dear Hanne, had embarked on his flight into eternity.

With this letter, Beuys fulfilled what he saw as his duty. But, at the same time, he was taking a precautionary measure to make sure that he did not come off too badly in the account of the incident. In his portrayal, he comes across as almost heroically level-headed, advising his companion to "keep calm."

Was it panic? Or perhaps even mortal fear after losing track of their formation? Possible human error? In his account, Beuys seems almost as if he were merely a passenger, rather than the person responsible for navigating the plane.

On the one hand, Beuys depicts Laurinck as a larger-than-life figure and super-pilot. "Life was no problem for Hanne," he writes. "He stood in the middle of it all, a laughing victor." On the other hand, Beuys paints the pilot as the more impetuous one, as being almost frivolous. "Hanne had a lot of bad luck in his time on the front, a lot of failures, a lot of trouble, things that might have made another man bitter," Beuys writes. "But after a bad experience of that sort, Hanne would be singing his favorite songs -- just as beautifully, just as wonderfully -- firm in his beliefs (in his own flying abilities, as well)."

It was an abbreviated life, one tailored to the requirements of war. Like Beuys, Laurinck was a boy from the countryside. Beuys was from Kleve, a town in western Germany near the Dutch border; Laurinck was from Vreden, a town about 60 kilometers (37 miles) northeast of Kleve. Both men grew up under the Nazi dictatorship, and both joined the Luftwaffe soon after finishing high school. At the time, many saw the German air force as a good place to become a hero.

Did Laurinck sense, however, that there could be another kind of life? As can be seen in a letter he wrote to his sister, he wanted to get engaged and seemed tired of being a pilot.

And Beuys? By the end of the war, he would experience hand-to-hand combat in what must have been terrible carnage. He never talked about these experiences later, only speaking generally of the "shit" that soldiers found themselves in and saying that participating in the fighting had been the morally correct thing to do.

A recently aired German TV series called "Unsere Mütter, Unsere Väter" ("Our Mothers, Our Fathers") tells the story of the war generation that Beuys belonged to. These are stories of young people, many of whom were lured in and then wrung dry by their regime. And, after the war, they were no longer capable of connecting to themselves or their guilt.

Beuys' 1944 letter gives the impression of a person much like those featured in the TV series -- someone who wanted to be a hero, but ended up being lured into something terrible instead. Beuys did achieve his dream of becoming a hero, but that would only come later, when he became a superstar of the modern art scene rather than as a soldier.

And he achieved that in part because of the way he mythologized his past in the war and especially in Crimea: elevating himself from radio operator to dive-bomber pilot; making himself the victim of enemy artillery fire, although it was actually poor weather that brought his plane down from the sky; and transforming the people who pulled him from the plane's wreckage into Tatar shamans, although his 1944 letter says they were Russian workers.

And while Beuys became part of an important new movement in West Germany, a recently published biography of the artist by author Hans Peter Riegel suggests that Beuys still remained an anachronistic figure, never quite able to break free from his earlier enthusiasm for nationalist ideology. Beuys attended gatherings of old comrades and sought out contact with former Nazis, Riegel shows. In 1980, Beuys admitted he had initially signed up for Hitler's army out of a "feeling of belonging and solidarity with others my age."

As an artist and professor, Beuys was no longer the periphery figure that he was in that wartime photograph from Crimea. Instead, he was the focal point of a new avant-garde. He saw himself as someone singled out and special -- and eventually others saw him that way, too. Yet this early letter shows a Joseph Beuys who was smaller, more assimilated and more average than he later wanted to see himself.