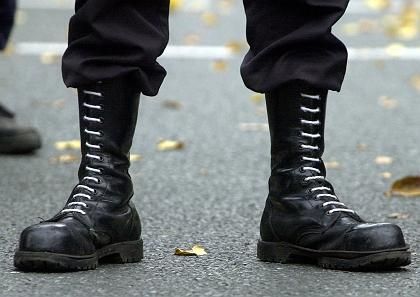 A group of around 12 Germans with shaven heads attacked and beat up two Greek waiters and a Greek barmaid on Saturday night in eastern Berlin, shouting "Piss off you shit foreigners."

A police spokesman said 11 men and one woman had been detained. Some of them face charges of bodily harm, disturbing the peace and robbery.

The two Greek men were taken to hospital after the attack in the city's eastern district of Pankow. One was treated for a broken arm and the other for injuries to his face. The woman was pushed but not injured.

Racist attacks on foreigners occur frequently in eastern Germany, prompting anti-racist campaigners and the Central Council of Jews in Germany to warn that parts of the region are becoming "no-go" areas for ethnic minorities.

A widely reported attack on eight Indian men in the eastern town of Mügeln in August sparked a nationwide debate about how to tackle racism and right-wing extremism in the former communist east of the country.

But, as expected, that debate has now died down and there is little evidence that authorities are making a significant effort to tackle the problem.