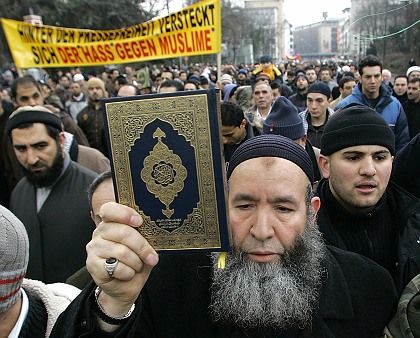 Muslims protest in Dusseldorf against the Danish Muhammad cartoons in this Feb. 2006 photo. The Interior Ministry has warned that exclusion of Muslims from mainstream German society is leading to radicalization.

A new study released by Germany's Interior Ministry has added new fuel to the debate about integration of Muslims in Germany, with the report warning about the danger of radicalization of Muslims.

According to the study, which was published Tuesday, around 40 percent of Muslims surveyed had a "fundamentalist orientation," which the authors defined as a strongly religious worldview and moral values.

However, the authors concluded that the vast majority of Muslims in Germany reject religiously motivated terrorism and violence: Some 92 percent of respondents agreed with the statement that terrorist acts in the name of Islam were a serious sin and an insult to Allah.

But the authors saw a potential threat in a small minority with Islamist leanings: Around 6 percent of those surveyed were classified as having "violent tendencies," while 14 percent of respondents had "anti-democratic" tendencies.

Around 12 percent of the Muslims in Germany identified with a religious-moral critique of the West and supported corporal punishment and the death penalty. The report also concluded that religious beliefs are becoming increasingly important for young people.

The study, which was carried out by Katrin Brettfeld and Peter Wetzels from the Institute for Criminology at the University of Hamburg, was commissioned by the Interior Ministry in an attempt to finding out the extent to which the Muslim community in Germany provides a breeding ground for extremist groups and potential terrorists. The authors interviewed 1,750 Muslims living in Germany for the study. Of that number, around 40 percent had German citizenship.

In the introduction to the report, Interior Minister Wolfgang Schäuble writes that the study leads to the "worrying conclusion that a serious potential for Islamist radicalization has developed in Germany." According to Schäuble, the lack of integration of immigrants into German society is leading to a "fundamental religious orientation."

The survey found that more than half of the respondents felt themselves excluded from German society and felt they were treated as foreigners. Around 20 percent had experienced some form of racism within the last 12 months.

Reacting to the study, Christine Haderthauer, general secretary of the conservative Bavarian party the Christian Social Union, said that her party "has always warned against the dangers of parallel societies. Our fears have been confirmed in a shocking manner." She said that Germany needs "an offensive to promote religious tolerance among young Muslims."

However social anthropologist Werner Schiffauer urged caution when interpreting the results. He told the daily newspaper Frankfurter Rundschau that "anti-democratic attitudes were equally common among Muslims and Germans (sic)," adding that it could not be concluded that Islam encourages anti-democratic tendencies. Leaders of groups representing the Turkish community and Muslims in Germany also urged caution in interpreting the results.

In concluding that 6 percent of Muslims in Germany have violent tendencies, the study appears to contradict to some extent the findings of Germany's domestic intelligence agency, the Office for the Protection of the Constitution, which monitors Islamist activity in the country. According to its 2006 report, there are currently around 32,000 Islamists in Germany who pose a potential security threat. That figure represents slightly more than 1 percent of the around 3 million Muslims who live in the country.

The Interior Ministry under Schäuble has sparked a series of controversies in recent months. Schäuble was the subject of heated criticism in July of this year when he appeared to suggest in a SPIEGEL interview that the targeted killing of terrorists might have to be considered. Schäuble's opponents have condemned him for attempting to constantly stretch the limits of what is acceptable under Germany's constitution in the fight against terror.

Other controversial positions Schäuble has promoted recently include taking terrorists into preventive custody, deploying the German army in domestic operations and searching suspects' computers online without their knowledge.