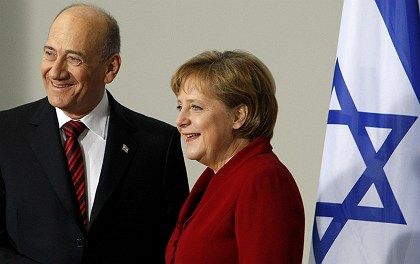 German Chancellor Angela Merkel meets with Israeli Prime Minister Ehud Olmert in the Chancellery in Berlin in this Feb. 2008 file photo. A new poll reveals that most Germans feel no historical responsibility toward Israel.

Israel is celebrating its 60th anniversary this Thursday, an event which will be marked with particular attention in Germany. Six decades after the Holocaust, Germany is very aware of its historical obligations to the Jewish state, and the country's right to exist is a cornerstone of German foreign policy.

However, a new survey reveals that ordinary Germans are far more ambivalent in their attitudes towards the country. According to the poll, which was published Saturday, 53 percent of people questioned responded in the negative when asked if Germany had a "special responsibility" towards Israel because of its history. Only 40 percent said the country did have a special responsibility.

Younger Germans in particular felt less responsibility toward Israel, with only 29 percent of those aged between 30 and 39 responding in the positive to the question. A massive 65 percent of respondents in that age group said Germany had no special responsibility to Israel. However, 48 percent of the over-60s said that Germany did have a special obligation.

When asked if Germany should support Israel politically in the event of the country being attacked, 58 percent responded yes, with 33 percent saying no. A total of 35 percent supported financial support for Israel in the event of an attack, while 57 percent were against it.

A vast majority rejected military support for Israel should the Jewish state come under attack. Only 13 percent of respondents said they were in favor of supporting Israel with weapons if it were attacked. Asked if Germany should send soldiers if Israel was attacked, again only 13 percent said yes, with the overwhelming majority -- 81 percent -- responding in the negative.

The attitudes revealed in the survey contrast with German government doctrine that the country has a special responsibility to the state of Israel. That official stance was recently reaffirmed by German Chancellor Angela Merkel who told Israel's parliament, the Knesset, that Germany would "never abandon Israel, but instead will remain a loyal partner and friend."

A total of 1,230 Germans over the age of 18 were surveyed for the poll, which was conducted on behalf of the television station ZDF to tie in with Israel's 60th anniversary.

The state of Israel declared its independence on May 14, 1948. The anniversary will be celebrated this year on May 8, which marks the 60th anniversary according to the Hebrew calendar.