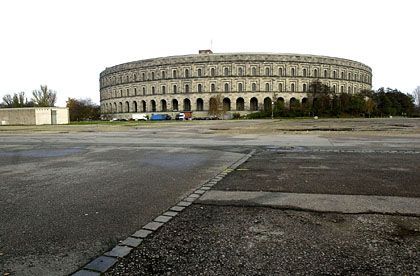 Part of the huge Congress Hall in Nuremberg is reopening as a concert venue.

It was the biggest construction project ever begun by the Nazis, but it was never completed. Now, six decades after the end of World War II, part of Nuremberg's Congress Hall is reopening -- as a concert venue.

The new 515-seat venue will be inaugurated Friday with a concert by clarinetist Giora Feidman, who specializes in Jewish klezmer music. The concert hall, which cost €2.5 million ($3.8 million) to renovate and develop, will be used by the city's symphony orchestra in the future.

The huge oval-shaped building, designed in the typical Nazi neo-Classicist style, was modeled on Rome's Colosseum and designed to seat 50,000 people. The foundation stone was laid in 1935 but the building was never finished. After the end of the war, the city of Nuremberg kept the ruins as a reminder of the dangers of fascism.

The structure is part of the Nazi Party Rally Grounds where Hitler held massive military parades during the 1930s. The parades were memorialized in Leni Riefenstahl's controversial film "Triumph of the Will." Today, the grounds are home to a documentation center that chronicles Nazi crimes.