If the sender of the video released on Friday afternoon was not in all likelihood al-Qaida, it would be difficult to take it seriously: The speaker has dressed for the occasion in an atypical style, in a black suit and blue tie. Standing in front of a red curtain, the Islamist Bekkay Harrach, who is originally from the German city of Bonn, utters his threats. Nothing in the video is reminiscent of the style of previous publications of this kind.

But his message is clear, and the German security authorities are taking it seriously. In the name of al-Qaida, the Islamist warns of terrorist attacks in Germany in the event that the result of the upcoming election does not reflect a desire on the part of the populace to withdraw the German army from Afghanistan.

"If the German people choose war, then they have delivered their own sentence," says Harrach in the video, which has been obtained by SPIEGEL ONLINE. Then jihad would come to Germany, he says. He advises Muslims in Germany to avoid any places that are not "essential to daily life" for a period of 14 days after the election and to keep their children close to them. He says that "the city of Kiel" will remain safe in any case, for reasons that are not explained. In the message, Harrach also alludes to the terrorist attacks in Madrid in 2004 and London in 2005.

On the other hand, Harrach, who is believed to be in the Waziristan region of Pakistan, says that Germany still has a chance to avoid the "imminent" events. The last mujahedeen will be recalled from Germany when the last German soldier is withdrawn from Afghanistan, he said. Harrach has already appeared representing al-Qaida in two videos this year which are considered authentic, under the name "Abu Talha, the German."

The video was circulated on Friday afternoon on several jihadist Web sites used by al-Qaida and other terrorist groups to distribute their propaganda. The video is around 30 minutes long and is titled "Security -- A Shared Destiny." Unlike in his earlier videos, Harrach this time shows his face, something that will presumably aid identification by the authorities.

German security authorities are currently analyzing the video. The means and location of its publishing speak for the video's authenticity, as do the speaker's voice and tone.

Sources in the German government say that there too the video is being regarded as authentic. Security authorities are taking Harrach's threat seriously. For months now the signs have been accumulating that al-Qaida is preparing an attack against German targets. Al-Qaida sympathizers recently spoke on the Internet about an imminent "German 9/11." According to the US government, the al-Qaida leadership in Pakistan has also instructed the group's North African branch, al-Qaida in the Maghreb, to deliberately target Germans.

The Federal Criminal Police (BKA) is therefore expecting new kidnapping attempts. It is "feared that German hostages could be killed in connection with political demands, such as the withdrawal of Germany from Afghanistan," a classified situation analysis by the BKA states. The document continues: "The many messages addressed directly at Germany are a new development. After the US, Germany is only the second country whose population is being addressed so directly, and in the language of the country, by al-Qaida and its allied organizations."

From Bonn to Waziristan

The crucial question now is whether Harrach is only making a threat, or if there will really be a green light for a previously prepared attack after the German national election on Sept. 27. Probably not even the Islamist himself believes that German troops will really be withdrawn immediately from Afghanistan. Both the Social Democrat's chancellor candidate Frank-Walter Steinmeier and Chancellor Angela Merkel have expressed their support for the mission in Afghanistan. The only major political party that supports an immediate withdrawal of Bundeswehr troops from Afghanistan is the left-wing Left Party.

On Friday, the German government and the interior ministers of Germany's federal states increased security measures as a precaution. Harrach is considered to belong to the middle level of al-Qaida's leadership and is believed to be a member of a committee that plans attacks abroad. The security authorities therefore trust him to follow up on his words with deeds.

Bekkay Harrach comes from the district of Bad Godesberg in Bonn and studied laser technology and business mathematics for a time. In 2003, he traveled to the Palestinian territories and was injured by the Israeli military. After the fall of Saddam Hussein, he traveled twice to Iraq.

German security authorities have evidence that Harrach traveled in 2007 to Waziristan in the Pakistani-Afghan border area. He was apparently in possession of a letter of recommendation from an alleged al-Qaida member who was recently convicted in the German city of Koblenz. Harrach apparently did in fact come into direct contact with al-Qaida in this way. 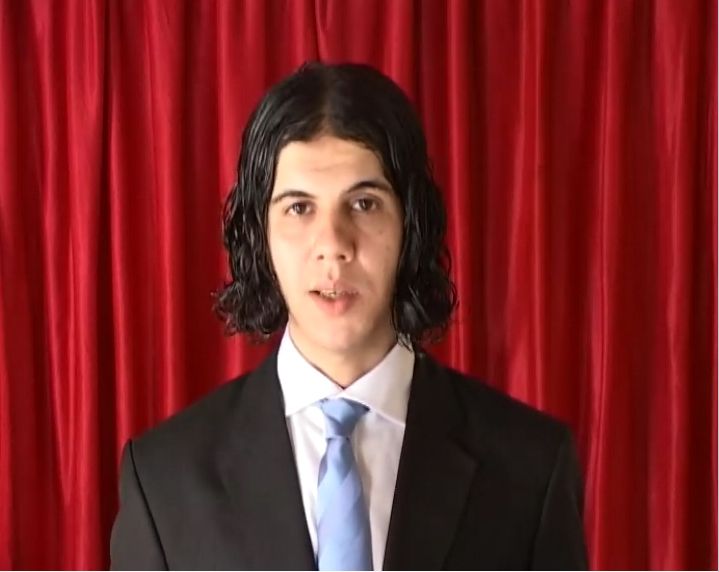 A screenshot from the new al-Qaida video