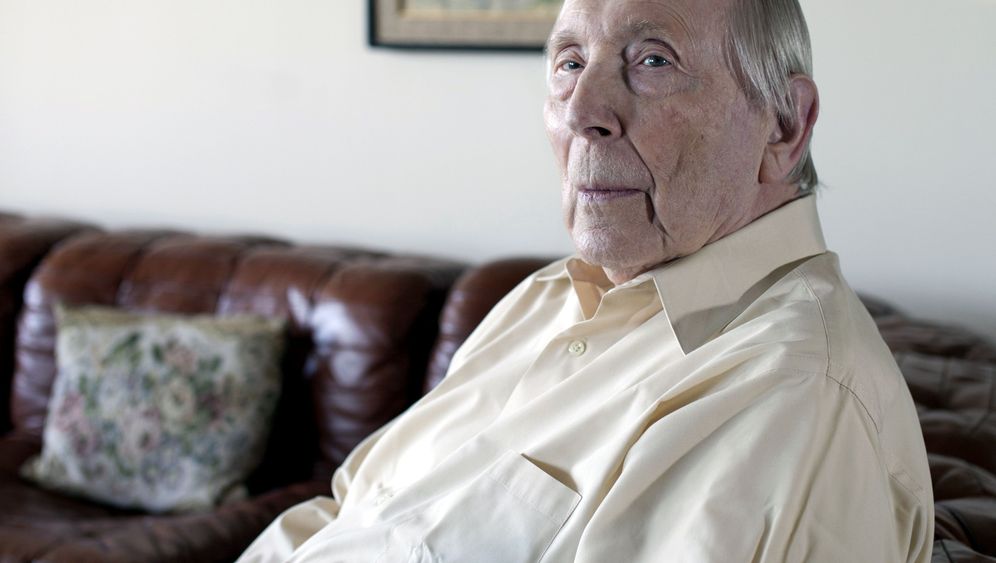 Photo Gallery: The Fight for a Family's Lost Art

David Toren is in his late eighties, and nearly blind. He sits with his back to the window: With his eyesight fading, he can no longer make out Central Park. But there is a lot of strength in his voice. It becomes louder with every sentence. The elderly New Yorker is a fighter. He says it himself: "I'm strong."

Toren is currently suing Germany, the country in which he was born. The complaint he filed in Washington DC on Wednesday is titled, "David Toren, Plaintiff, v. Federal Republic of Germany and Free State of Bavaria."

Toren is tired of waiting. He feels the German government hasn't done anything to bring justice to him and the other victims. He was born in 1925 -- and he simply doesn't have any time left.

He's demanding the surrender of a painting confiscated from Cornelius Gurlitt who, like Toren, is an octognenarian and the son of an art dealer. The work in question, "Two Riders on the Beach," is an oil painting of two men riding horses on a beach by German impressionist Max Liebermann. In the painting, the horses prance in front of foaming waves. The scene has an intensity, it's like being transported into the misty morning air. It is a charismatic work that was confiscated by the Nazis and, to use the language of the time, "Aryanized."

For David Toren, the case involves not only the painting, but also the story of his life.

His parents were gassed in Auschwitz after having brought both of their sons to safety. He, the younger one, made it to Sweden on one of the last Kindertransports, on August 23, 1939, a coordinated effort to save Jewish children from the Nazis. His brother traveled to Holland, and then on to England, one day before war broke out. They escaped with their lives and nothing else. The complaint describes how Toren emigrated to the United States in 1956 with "less than $100 to his name."

Today he can look back on a successful career as a lawyer. Toren lives in an apartment building in a good part of uptown Manhattan. It's a comfortable home filled with family photos, plants, paintings. Despite his advanced age, he stays fit. He has a strong mind and an unusually strong memory.

His son Peter, who is also a lawyer and works in Washington DC, helped plan the complaint, which is 19 pages long and clearly states its demand: that the Federal Republic of Germany -- or, by proxy, the Free State of Bavaria -- give Toren back the Liebermann painting. Toren and his brother, it claims, are the rightful inheritors.

For a long time, the painting seemed to have disappeared. Now we know it ended up in the possession of Hildebrand Gurlitt, an art dealer who curried favors with the Nazis. It resurfaced in 2012, almost an eternity later, as one of the almost 1,300 works of art found by customs officials in the Munich apartment of Cornelius Gurlitt, the art dealer's son. Suspicions that Cornelius had evaded taxes prompted the original search and the confiscation of the bewilderingly large collection of paintings.

It wasn't until November 2013 that the discovery became public, after a source provided details of the investigation to a journalist. The original article in the German newsweekly Focus on a Nazi treasure find in Munich prompted an international outcry. Pressure mounted against the Bavarian public prosecutor in Augsburg, who reacted by holding a press conference at which he projected images of the confiscated paintings on a wall, including the Liebermann work.

The case surrounding Gurlitt, who hoarded his father's Nazi-era acquisitions, remains shrouded in mystery, his story contradictory. When everything came out in 2013, the German Foreign Ministry warned of the country's potential loss of reputation. The chancellor's spokesperson said due process needed to be established.

But due process for what? For whom? Against whom?

Politicians in Berlin demanded that a task force with experts be convened. And as it turned out, 590 of the works from Schwabing were, relatively quickly, classified on the "Lost Art" website as being possible Nazi looted art. Not much else happened after that. But then things got even stranger. A few weeks ago, it was revealed that Cornelius Gurlitt had hidden more valuable paintings in his house in Salzburg.

Gurlitt Fights for Return of His Collection

Cornelius Gurlitt, 81, is a solitary man with a heart condition. In late 2013, the Munich district court hired an official caretaker for him, who then hired a team of lawyers. That team has now taken the Salzburg paintings into custody, and is asking for the approximately 1,300 paintings confiscated by the state to be returned. The law may well be on their side.

Gurlitt's lawyers are magnanimously promising a "fair resolution" that is swift and amicable, but the case of the Liebermann painting reveals what that actually means. The idea of auctioning off the work and dividing up the proceeds has reportedly been discussed. Toren, however, wants the painting back in his family's name. Toren claims Gurlitt's advisor demanded a large sum of money in exchange for the painting: Gurlitt's Berlin legal counsel had told Toren in New York that Gurlitt's team wanted €300,000 ($415,890), a sum later reduced to €100,000. Gurlitt's restitution lawyer doesn't want to comment on the content of the negotiations.

Toren's complaint may be the only way to demonstrate just how strange the behavior of the Germans has been in the Gurlitt case.

Strange also because the task force has access to Hildebrand Gurlitt's meticulous accounting records, which could very well explain the origins of the 589 other potentially looted works of art. They could also help the descendants of other Jewish collectors find their inheritances, including Toren, who suspects that the Gurlitt trove contains other paintings from the Friedmann Collection. But as long as the task force doesn't let anybody look at the books, Gurlitt's lawyer can easily claim that there isn't much Nazi stolen art among the paintings, and thus, few valid claims to be made by inheritors.

The Seizure of a Family Collection

David Toren was born in 1925, as Klaus-Günther Tarnowski, in Breslau (now known as Wroclaw in today's Poland). His father was a well-respected lawyer named Georg Tarnowski, whose uncle, David Friedmann, was a wealthy businessman. Friedmann owned a sugar factory and a distillery, and aside from a villa in Breslau, had a hunting lodge and other assets. His prominence worked to his disadvantage -- the people in Breslau knew about the valuable art collection Friedmann kept in his villa, which was located at Ahornallee 27. Liebermann's horse painting hung in the conservatory. Toren remembers how it entranced him as a child: the pretty horses, the churning sea.

Toren saw his great-uncle and the painting for the last time in November 1938, on the day after Kristallnacht. Toren's father was arrested that morning by the Gestapo, and then asked to come to Friedmann's villa by General von Kleist. There Toren's father, who was also Friedmann's lawyer, was asked to finalize the sale of one of Friedmann's assets to the general. Toren was there, and waited. Later that day, his father was summoned again and imprisoned, for the first time, in a concentration camp: three weeks in Buchenwald. After that, he was a broken man. When he came home, Toren remembers, he brought the stench and the terror of the camp back with him.

A letter dating from December 1939 proves that Nazi officials had sought to gain possession of Friedmann's art collection. A top government councilor named Westram had drafted the letter to the Secretary of Commerce: "Subject: The securing of Jewish-owned art."

In it he described the collection of a "Jew Friedmann, Breslau, Ahornallee 27." The collection included French painters like Courbet, Pissarro, Raffaelli and Rousseau, as well as "good German landscape artists" like Thaulow, Oberländer and Lestikow. Two paintings were specifically named, both by Max Liebermann, a "Jewish painter": "Riders on the Beach" and "Basket Weavers." He also mentioned valuable ceramics and, again and again, potential sales figures that could enrich the Reich.

A letter from August 1942, a carbon copy of which was traced by SPIEGEL, shows that a Breslau museum director was involved in the process: Cornelius Müller Hofstede ran the Schlesisches Museum der Bildenden Künste (Silesian Museum of Fine Arts). This art historian, a member of the Nazi party, appraised a number of Jewish collections for the Gestapo. Old stock books show that he brought numerous items into his museum's storage space and then sold them.

The carbon-copied letter was sent from Müller Hofstede to Hildebrand Gurlitt in Dresden. In the letter, the museum director obediently offered the dealer the two paintings. Gurlitt must have been very interested, because he had already asked about Liebermann paintings in Breslau and offered to pay in cash -- belying the notion that he didn't know where these works came from.

David Friedmann was a widow, and died a natural death in 1942. His only daughter, Charlotte, was deported and murdered in a concentration camp in 1943.

Müller Hofstede and Hildebrand Gurlitt made new careers for themselves after the war. Müller Hofstede obtained powerful positions first in Brunswick, then at the Gemäldegalerie, West Berlin's portrait gallery. His personal documents also include denazification questionnaires.

And Gurlitt? He allowed himself to be celebrated as a both savior of the kinds of modern art that had been banned from museums by the Nazis and as someone who, before 1945, had dealt in the most expensive paintings in the world. Or at least that's how he was described in an article from 1956, dated quite a while before the deadly car accident that claimed his life in 1956.

It's known that Hildebrand Gurlitt's widow and his daughter, who passed away two years ago, as well as his son, Cornelius, sold off paintings from the collection on several occasions. That may have been what happened to the second Liebermann painting from the Friedmann collection that had been mentioned by name: "Basket Weavers." A work by Liebermann with the same title and same measurements was auctioned in Villa Grisebach, a Berlin auction house, in 2000. Hildebrand Gurlitt is named as one of the previous owners.

Toren speaks Swedish, Hebrew and even his German is still perfect. As a patent lawyer in New York, he found it difficult to represent German clients. He won an American case for the aeronautical and defense concern Messerschmitt-Bölkow-Blohm. He also worked for a company, Th. Goldschmidt AG, which he thought was staffed by nice people. Then at one point he discovered that the firm had long been a shareholder in the company that manufactured of Zyklon B, "the gas that killed my parents."

He had tried to bring his parents to Sweden even before he had turned 18. But he couldn't find anyone who would cover them financially. If he and his relatives get the Liebermann painting back, it won't rectify anything. But if he doesn't, he argues, it would mean that nobody has learned anything.