The eastern German town of Storkow had planned to host a soccer match this Saturday to celebrate tolerance. But then the opposing team cancelled -- out of concerns about a far-right demonstration.

Energie Cottbus, a team in Germany's second league, was set for a friendly pre-season match against Storkow's football club Germania but pulled out on Wednesday, having learned that the extreme-right National Democratic Party of Germany (NPD) would be protesting the event. Energie's manager claimed he could not guarantee his players' safety. 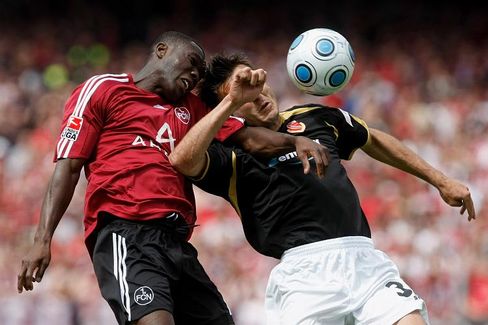 Isaac Boayke (l) of Nuernberg jumps for a header with Mario Cvitanovic of Energie Cottbus.

Storkow, a town of just 800 in the eastern German state of Brandenburg, had been planning Saturday's "soccer fest" under the motto "With Energie for Tolerance" for months. It invited Energie Cottbus to participate because the club, also based in Brandenburg, has taken an especially aggressive approach to racism in football in the past, launching a campaign under the slogan "Show racism the red card" in 1999.

But when last week the NPD announced it would be demonstrating on the day of the match, Energie decided to take no risks and pulled out. The Storkow organizers have voiced their disappointment, seeing the cancellation as a concession to the right wing extremists.

Germania club chairman Johann Kney told reporters on Thursday, "Of all teams, we would have expected Energie to show some spine."

The NPD had written an open letter to Germania, demanding the club change the name of the match. "If Germania Stockow's management can't find a more appropriate motto for the event, the directors of Brandenburg's NPD would be more the willing to help find a name under which the event could be celebrated as a pure sporting event," the letter offered. It also called on its followers to protest.

In the 2008 municipal elections, the NPD took 7.3 percent of the vote in Stockow and it has representation in two eastern German state parliaments.

Racism and soccer have a complicated history in Germany. Many fan clubs, particularly in eastern Germany, have become bastions fo the neo-Nazi movement. Some far-right groups even sponsor local soccer clubs. And non-white players often come in for racist abuse from the stands.

In 2006, a former government spokesman cast a shadow over the excited lead-up to the World Cup in Germany by warning non-white visitors not to go to parts of the former East German. Some called his reference to "no-go" areas exaggerated but when the far-right National Democratic Party (NPD) distributed a pamphlet suggesting that national team defender Patrick Owomoyela, of mixed German Nigerian birth, wasn't white enough to play on the team, many felt confirmed in their suspicion that there was a problem with racism in football. Two senior members of the NPD were later charged and convicted of inciting racial hated.

A regional politician, however, is determined that the NPD won't have the last say on the game planned for this weekend. Following Energie's cancellation, Brandenburg's Finance Minister Rainer Speer stepped in. As president of a local regional club, he has cobbled together an improvised team which will go up against Germania on Saturday.