Marina Weisband wasn't actually supposed to be here. When a press conference was organized with leaders of the newly elected Pirate Party, only Sebastian Nerz, the party leader, and Andreas Baum, head of the party's faction in the Berlin state parliament, were on the schedule. But now a woman sits here too, in front of the blue wall in the press building, and she's dressed up: Weisband wears a blazer, and her braided hair is reminiscent of Yulia Tymoshenko, the face of Ukraine's Orange Revolution.

Weisband won this place at the table only after the fact. As the Pirates' political director, her job is to guide the party's ambitions at the federal level. But Berlin's journalists only wanted to interview the men.

Eventually, her least favorite question comes up: Why is the Pirate Party primarily a men's party? "Yes, the women question," she says, looking annoyed. "We don't keep track of our members' gender. We believe true equality starts when we stop counting women."

Electoral success in Berlin has catapulted the Pirate Party into German consciousness as a new political force. The party garnered nearly 9 percent of the vote in September's state-level elections in the capital. (Berlin counts as its own state.) That was enough to give it seats, for the first time, in a regional parliament. Nationwide polls currently put the party at a healthy 8 percent. The Pirates aim to embody a new style of politics, calling for more transparency and citizen involvement, grassroots democracy and politics that take advantage of the opportunities offered by the Internet. It's meant to come across as fresh and modern. So is the party's rejection of gender warfare.

No one knows precisely how many women are in the party, but the number isn't high. Party conventions consist almost entirely of men sitting in front of their laptops. Of the Pirates' 15 representatives in the Berlin state parliament, only one is a woman, while the party's executive committee includes two. Unlike the established political parties, though, the Pirates see no need to make changes.

They reject the idea of establishing a quota for women, something even the conservative Christian Social Union has implemented. The Pirates aim to be "post-gender." They believe there can be no discrimination against women if gender doesn't matter -- no differences, no discrimination, no problem -- and accept the party's shortage of female members accordingly. "We grew out of the Internet scene, and that happens to be dominated by men," says party leader Nerz. Why, though? And is the Pirates' position truly modern, or naïve, or terribly old-fashioned?

A Woman Among Men

Having survived her first major press conference, Marina Weisband is on her way to a Berlin party meeting. Exhausted, she sinks into a taxi. "It all still seems pretty absurd to me," she says. "I never actually even wanted a party position." Weisband, 24, is studying psychology in the city of Münster. She never had any interest in politics, at least until the Pirates came along. She explains, "I had an intuitive feeling that they had answers to the most pressing questions: how to reform democracy in the face of new technology and societal developments."

She joined the party two years ago and attended a convention for the first time in May. Weisband drew attention with her clever contributions to discussions within her local group. When the search began for executive committee members, someone suggested Weisband. She gave a polished speech and mentioned her desire to be seen simply as a person. "Please don't elect me because I'm a woman!" she cried. The Pirates cheered, and Weisband won against eight opponents.

A conversation with Marina Weisband about the "women question" is a strange thing, full of contradictions. Weisband says she's very feminine and never wears trousers, only dresses and skirts; she enjoys presenting herself as a woman. At the same time she is a political director for a party that wants to make no distinction between genders. She doesn't entertain the notion that she might have fared so well in the Pirate Party precisely because she's a young woman. "It's not as if all the Pirates just stare at my ass," she says.

Like many women of her generation, Weisband believes men and women have the same opportunities everywhere. She herself has never experienced differently. Debates about gender seem old-fashioned to her, and she believes the real manifestations of gender differences arise when women are given preference because of them. "I don't want to be a quota woman," Weisband says. Asked how politics can help eliminate inequality in the broader society, she says it's simply necessary to raise awareness -- "for example through educational programs on public television."

When she arrives at Pirate Party headquarters in Berlin, Weisband heads to a back room to drop off her bag. In the next room over, things suddenly get loud as two Pirates argue over the latest scandal: In an interview, party leader Nerz revealed ambitions for seats at the federal level, after which two other Berlin Pirates publicly contradicted him, insisting on humility. It's a fight over who calls the shots -- the same fight that so often breaks out when there's suddenly power at stake. Weisband rolls her eyes. "That's just a couple people arguing over who's got a bigger one," she says.

Leena Simon doesn't take it all quite so calmly. Last year, she put out an open call for a "women pirates' network" to address the way male colleagues impose their will on the party. The Berlin state-level committee reprimanded Simon for behavior harmful to the party and when she ran for the executive committee at the next party convention, she was booed from the stage, not just by the men.

"What I always hear is: Your problem doesn't even exist, since we're post-gender," Simon says. "That's very convenient, of course." But Simon finds it difficult to explain precisely what it is that bothers her, since there was never a serious incident, just a series of small things adding up to a big picture. There was the way men kept hitting on her, for example. Or the facilitator at a convention who, when it was time for the candidates to step forward, shouted, "Come up here if you've got the balls!"

"It's demoralizing," Simon says. "It's something like a glass ceiling. That's why other parties are introducing quotas, so that it's even possible to break through these male structures." Simon believes this problem is one reason many women have stayed away from the Pirate Party, as members and as voters: "They're put off by the ignorance and the boorish tone."

But Simon chose not to leave the party. She says the atmosphere has improved somewhat, although the flaming -- the hostile online commentary -- hasn't let up. Angry e-mails and forum posts continue to badmouth Simon for her actions, most of the messages presumably from men.

"The opinion leaders on the Web are men," says Constanze Kurz. She's sitting in the cafeteria at Berlin's Technical University, where an organization called the Society for Informatics is meeting today. Kurz, 37, is participating as a representative for the Chaos Computer Club, one of the few women to have established herself in the hacker scene. She also teaches at the university level, where hardly any of her students are women.

In Germany as a whole, just 19 percent of first-semester computer science students are female. "They're not as interested in programming," Kurz says. "We'd have to change the entire course of study to appeal more to women. But really, it starts with how children are raised." In most children's bedrooms, she says, the old gender stereotypes are alive and well, with dolls for the girls and building blocks for the boys, and this type of socialization is one reason why technical professions remain a male bastion.

As the Internet gains importance, this phenomenon has become a problem for women, who may miss out on the power to define an increasingly important aspect of the world. Women are certainly active online, Kurz says, but mostly on Facebook and other forums that revolve around social connections. "Women use the Internet," she says, "but they don't design it."

The Pirate Party simply maintains this structure. Kurz believes the Pirates themselves need to recognize and solve the problem. "A democratic party needs to have a different standard here, they can't just turn a blind eye to half of the electorate," she says. "The Pirates can't talk their way out of this forever by being post-gender. At its core, their position is extremely old-fashioned." As long as they fail to realize this, Kurz adds, they will continue to face the women question.

Marina Weisband, the party's political director, believes the problem will solve itself. "That's the spirit of our time," she says. "The differences between men and women are disappearing."

When Weisband reached her party's Berlin office after the big press conference, a couple other Pirates were smoking outside the door. Weisband went up to them, threw her arms in the air and shouted, "I survived it!" The Pirates grinned and one of them said, "Good man." 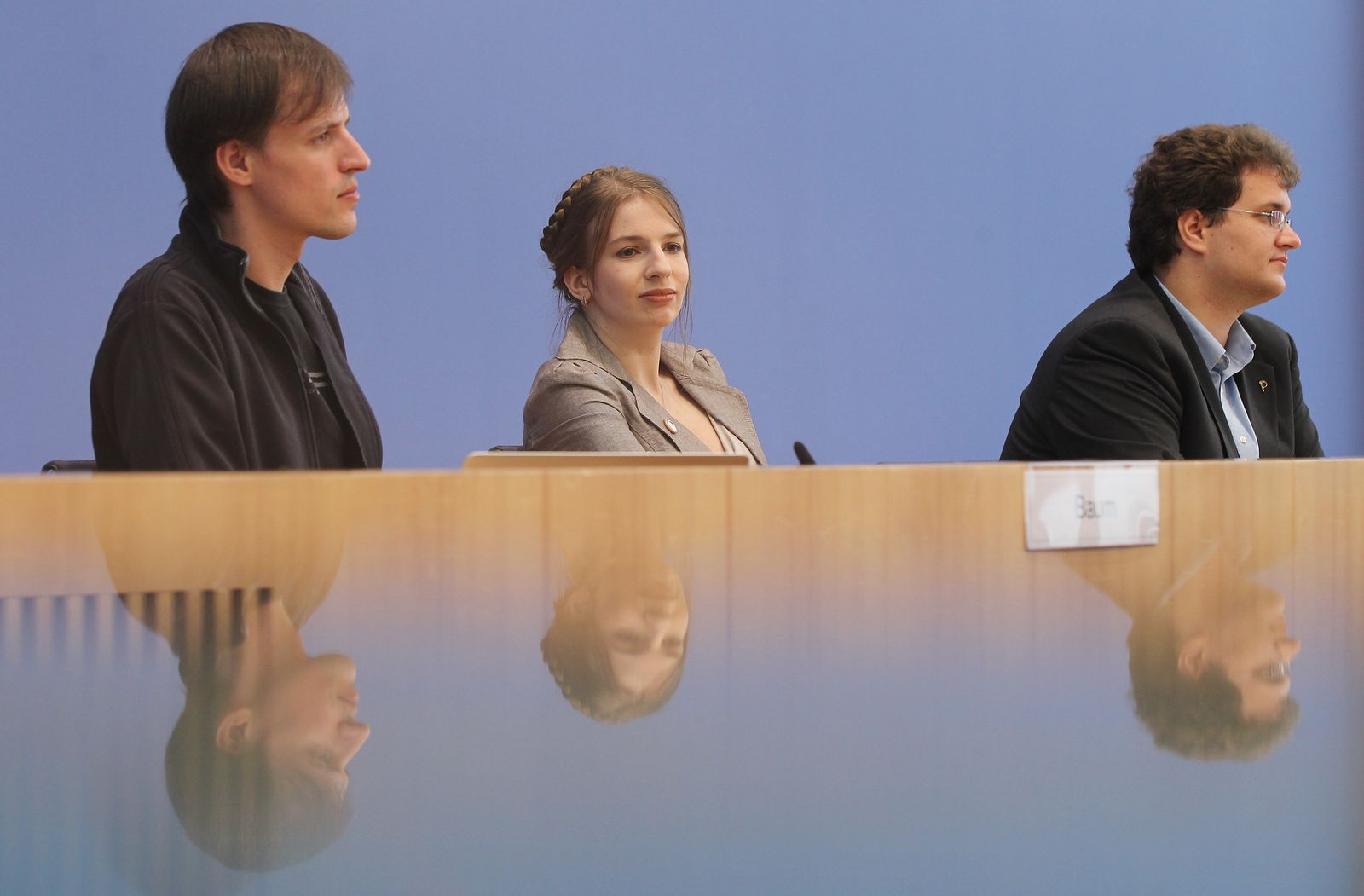