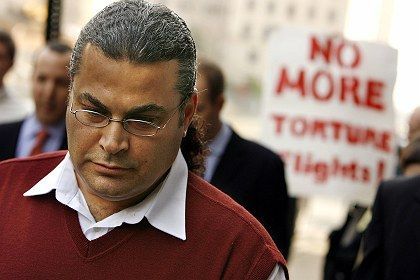 Khaled el-Masri was kidnapped and held for five months by US CIA agents.

For a moment earlier this year, it seemed as though Germany might turn international relations on their head. A Munich court in January issued arrest warrants for 13 CIA agents allegedly responsible for kidnapping a German citizen. The agents are accused of flying him to Afghanistan for interrogation before dumping him on the side of an Albanian road in May 2004 after they realized they had abducted the wrong man.

Now, though, in the face of US intransigence, Germany has backed down. SPIEGEL has discovered that, in order to avoid a conflict with Washington, Berlin has decided to forgo forwarding a formal request that the agents be arrested. Germany's Justice Ministry sent out a feeler in late August to determine how Washington might react to such a request. The answer was clear: Washington is fundamentally unprepared to move against the agents.

Khaled el-Masri, a German citizen of Lebanese descent, was abducted in December 2003 in Macedonia and taken to a prison in Kabul where he was abused. El-Masri has said he was beaten and sodomized by his captors. He was released five months later and claims his captors admitted it was a case of mistaken identity. The US has never owned up to the error, but Merkel has said that US officials acknowledged to her that they had taken el-Masri by mistake.

Human rights groups have focused on the el-Masri case in pointing out the fundamental injustices inherent in the US "extraordinary renditions" program, which sees terror suspects arrested by US agents and flown to third countries for interrogation and, it has been alleged, torture.

El-Masri, though, may have nowhere left to turn in search of justice in his case. He is pursuing civil damages in US courts, but the government in Washington is claiming state secrecy concerns and has refused to cooperate -- leaving the courts with no choice but to bar the case.

The 43-year-old el-Masri has suffered from psychological instability since his return to Germany in 2004; his lawyer Manfred Gnjidic described him as a "psychological wreck" earlier this year. In May, el-Masri was arrested for attempting to set a supermarket on fire following an argument over a defective MP3 player el-Masri had purchased at the store.