The engagement took place south of Kunduz in northern Afghanistan, where the Taliban have over the last few years opened up a second front against NATO, and in the process put German soldiers in the line of fire more than at any point since the country's armed forces, the Bundeswehr, first arrived in the country nearly a decade ago. General Fritz had just taken over as the commander of the 11,000 NATO troops in the north of Afghanistan -- including, for the first time, Americans. Given the risk of killing civilians when deploying artillery, not to mention the weight of German history, he thought long and hard before giving the order to fire 155 mm shells from PzH 2000 howitzers into a neighboring valley.

"We planned very carefully and checked whether all the conditions for using artillery had been met," he says. "Once we were satisfied that everything was okay, we opened fire."

Since then, the Bundeswehr, alongside the United States and other troops in northern Afghanistan, has fought many such battles as part of a more aggressive strategy that General Fritz describes as "aufspüren, stellen, schlagen", or "detect, engage, strike." The use of artillery allows the Bundeswehr to support infantry more efficiently in order to take the initiative and drive the Taliban out of the area and prevent them from laying roadside bombs.

"The Taliban fear artillery very much," he says. The Bundeswehr is likely to be involved in more battles of this kind in the next few years as NATO begins its troop drawdown. Supply routes through northern Afghanistan into Tajikistan and Uzbekistan will be vital for the withdrawal and it will be urgent that they be protected by the Bundeswehr and other ISAF security forces in the country.

It's a long way from the old Bundeswehr that one senior British officer referred to a few years ago, only half-jokingly, as "an aggressive camping organization." In former times, the Bundeswehr was more likely to wait to be attacked than to go on the offensive.

Germany had long been criticized by its allies for the "caveats" that meant its troops could not be deployed with the same flexibility as their ISAF partners. German officials are uncomfortable with the term "caveats" and prefer to talk about "rules of engagement." However, they admit that Germany did have standards -- in terms of the medical back-up needed for any operation, for example -- that were higher than those of other NATO countries. In practice, commanders took fewer risks than their American or British counterparts, which placed restrictions on their forces' capabilities, particularly at night. Until a change in 2009, they also could not fire at fleeing assailants.

According to Henning Riecke, the head of the trans-Atlantic relations program at the German Council on Foreign Relations (DGAP), the Americans stopped complaining about such restrictions -- but only because they didn't think Germany would lift them. "They gave up," he says.

German officials insist there has still been no "substantial" change in terms of what Germany's 5,000 troops in Afghanistan can and cannot do. But following the new NATO strategy adopted at the international conference on Afghanistan in London in January 2010, there was what Fritz calls a national "clarification" of the rules of engagement that made it easier for German troops to venture further from their bases and for longer periods of time. "We always did night patrols, but in the framework of the partnering concept we can now do them in a more offensive way than before," he says.

The Bundeswehr Reconfigures Itself

After General Fritz arrived in Mazar-e-Sharif to take over Regional Command North in June 2010, he also reorganized the headquarters and replaced the Bundeswehr's quick reaction force with two better-equipped battle groups in order to implement the reorientation.

Perhaps most importantly of all, Fritz received an additional 5,000 US troops and nearly 60 American helicopters -- which are key to patrolling an area half the size of Germany. Above all, it was the US military surge in the north, Fritz says, that enabled the Bundeswehr to operate in a new way. In particular, it allowed German troops to venture outside their bases for longer periods. Reorganized and reinforced, they were now also able to go on the offensive and enter what had previously been no-go areas -- mainly so-called Pashtun pockets -- and clear them of insurgents. There was relief in Berlin earlier this month when US Defense Secretary Leon Panetta announced that the additional US troops and helicopters would remain in the north of Afghanistan.

Timo Noetzel, the director of Stiftung Neue Verantwortung, a Berlin-based think tank, says the additional American troops and helicopters have made a huge difference on the ground. "The US deployment changed the configuration," he says. Noetzel was a political adviser to one of Fritz's predecessors as regional commander at Mazar-e-Sharif in 2007, when there were only 6-8 helicopters available to ISAF forces to respond to the outbreak of the insurgency in the north.

"Operational flexibility of forces was extremely limited due to lack of air mobility," he says. Since then, the German military has adapted and developed its own counter-insurgency doctrine, he says. "The Bundeswehr learned a lot in the last few years." However, it emerged recently that the German government is planning to reduce its order for the NH-90 helicopters that the Bundeswehr desperately needs in Afghanistan as part of its defense spending cuts.

According to an official German government report published in July, the new approach in the north has forced the Taliban out of its strongholds and led to a slight increase in the number of "security-relevant incidents" in the north this year. The Taliban has responded to the new NATO strategy with spectacular attacks such as the assassination in May of the chief of the Afghan police for the northern region in an incident that also killed two German soldiers -- one of them a major. So far in 2011, seven German soldiers have already been killed in combat, compared to eight in 2010. In that sense, the new strategy has made life harder for the Bundeswehr. The number of German soldiers suffering from Post-Traumatic Stress Disorder (PTSD) is also increasing.

Will Aggressive Approach Lead to Backlash?

However, the German government says that these attacks should not be seen as an expression of the Taliban's strength but rather as a reaction to the pressure they have been under since NATO began engaging them more aggressively in the north. But even if the new NATO strategy has succeeded in regaining the initiative and putting the Taliban on the defensive, as the German government claims, there is a risk that the more aggressive approach will itself cause a backlash from the local population. This risk was illustrated in May, when protests outside a small German base in Taloqan in Takhar province following an operation by US forces turned violent and left 11 dead.

The counterinsurgency operation in Afghanistan is also slowly changing the culture of the Bundeswehr, whose operational thinking had until then been largely shaped by its experience of peacekeeping in the Balkans. Fritz, who returned to Germany earlier this year, speaks of a "different generation" of young German officers who, unlike their predecessors, have seen extensive combat. During his time in Afghanistan, 18 soldiers under his command, including four Germans, were killed. "Obviously these young people are affected by what they experience," he says. "They have a clear idea of the sharp end of our profession. They take their experiences back home to Germany with them and I think that's a good thing."

However, some German soldiers say they still don't feel fully appreciated by those on whose behalf they are fighting and dying. Former German President Horst Köhler said in 2005 that the attitude of the German public towards the conflict was one of "friendly uninterest."

Fritz says that although the German public has in the last two years come to the realization that it is at war rather than simply carrying out a "stabilization mission" in Afghanistan, it still has some way to go. "The German media reports about Afghanistan more frequently than it used to," Fritz says. "However, the public interest in security policy is limited -- something that we would like to change so that our nation recognizes the achievements of our troops in Afghanistan even more." 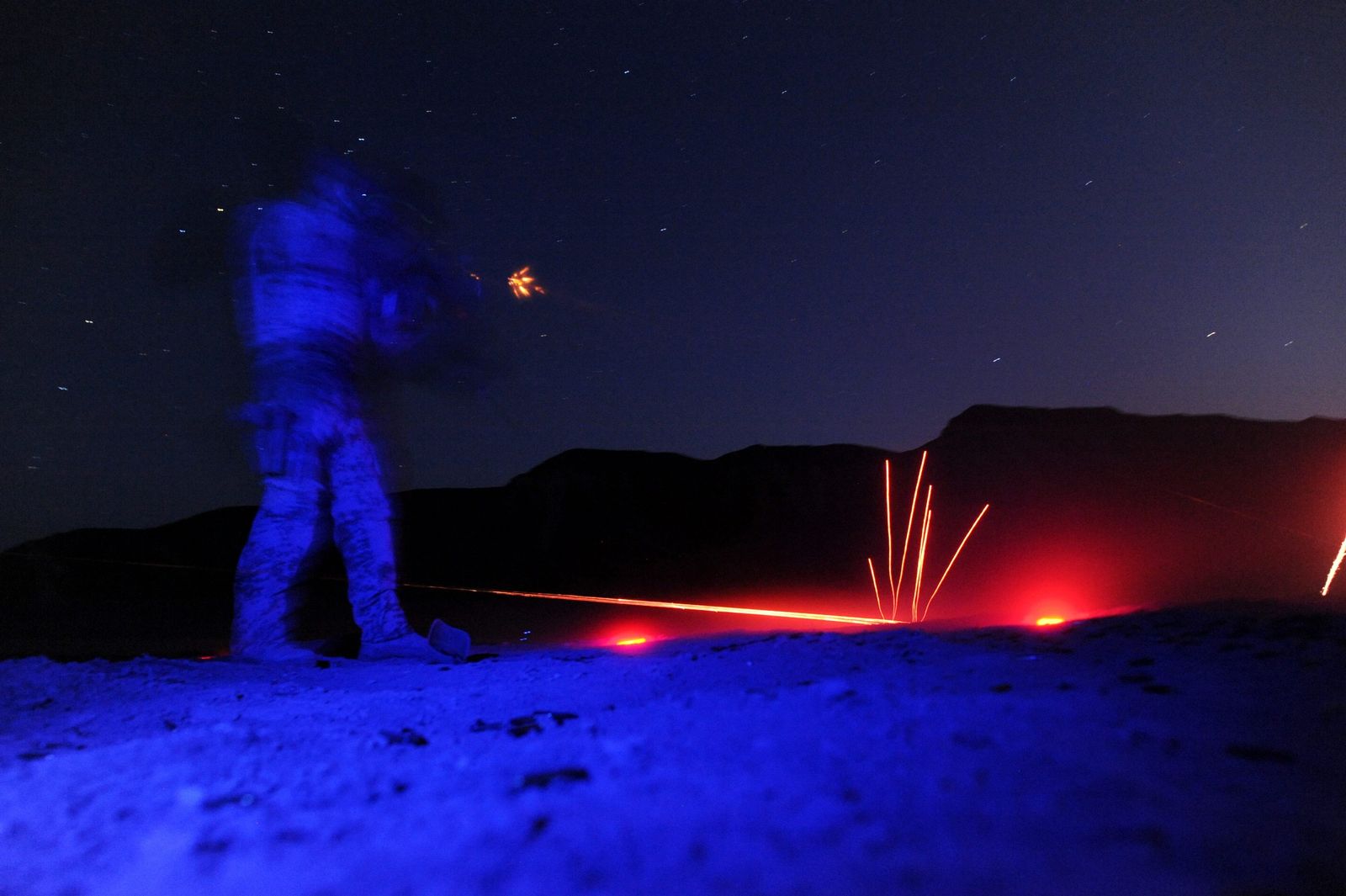 A German Bundeswehr soldier fires a gun during a night-time exercise in the district of Chahar Dara in northern Afghanistan.