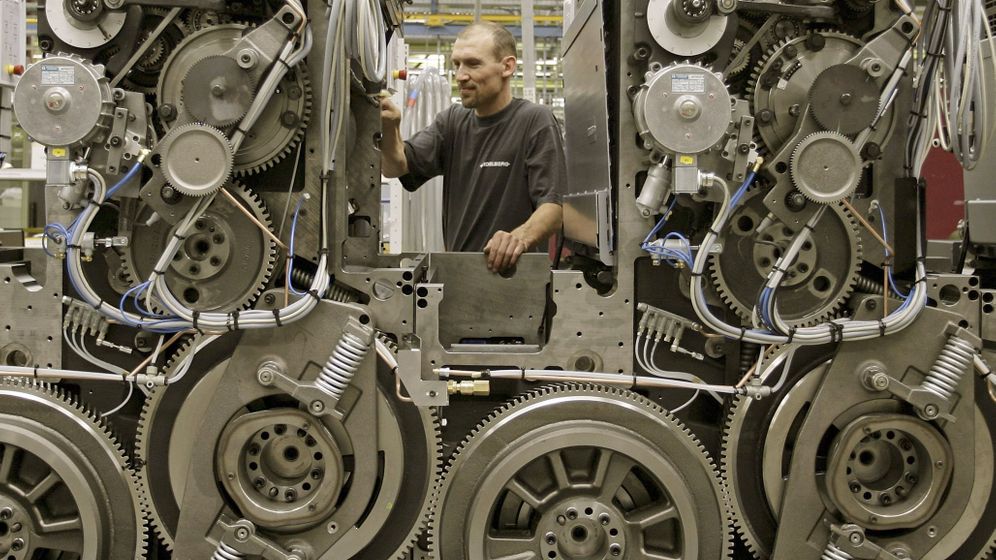 Finally, someone who is praising the country! "Everything is much better in Germany," says Mohan Sahadevan. "The people on the street are so friendly, you get vacation from your job, and you even have weekends off." Besides, he adds, Germany is the land of engineers. In short, it's a paradise.

The 39-year-old programmer has been working in Germany for the last five years. His family still lives in the state of Kerala in southwestern India, and he hasn't seen his two children in two years. In 2005, his employer at the time, Siemens, sent him to Germany -- with a visa that was tied to the company. He has worked for the Berlin-based company Datango for the last year. The IT firm's employees come from seven different countries, and almost half of its programmers are non-Germans. Yet another paradise for someone like Sahadevan.

"We always advertise our job openings internationally," says Vice President of Software Engineering Stefan Dahlke. "In many cases, the best people aren't from Germany but from abroad. And they're the ones we hire, of course." It sounds almost too good to be true.

And it is. In fact, hiring Sahadevan has been a nerve-wracking experience for his boss, Dahlke. Residence permits issued to foreign experts working in Germany cannot simply be transferred from one job to the next. When the Indian left his job at Siemens, he suddenly found that his status in Germany had changed and he was only there semi-legally. It took five months until his visa was renewed -- five months of trepidation.

Not Much Time Left

Germany, a highly industrialized nation dependent on its technical expertise, extends only a limited welcome to qualified foreigners. But it is an immigration policy which threatens to gamble away the country's future. For years, German politicians have wasted valuable time in an international competition for talent with their half-hearted immigration and integration policies. And now, just as the country seems to have emerged from a major crisis, the alarmists are issuing new warnings. In a knowledge-based society, well-trained people are the most important and scarcest form of capital. While other industrialized nations have been courting skilled foreign workers for years, Germany has discouraged these highly qualified people and continues to do so today. Now, however, globalization, demographic changes and economic demands require a new, modern immigration policy. The country doesn't have much time left to change its policies.

German companies are already complaining about a lack of skilled workers. According to the German Association for Information Technology (BITKOM), the industry is currently seeking 20,000 IT specialists. And the Association of German Engineers (VDI) says that Germany needs 35,000 more engineers than are currently available. The shortage applies to all sectors.

The Expert Council of German Foundations on Integration and Migration (SVR) estimates that the German economy is already losing about €20 billion ($26 billion) in value a year as a result of these developments. And the dilemma isn't even all that new. Germans have been discussing the biggest problem -- demographic change -- for decades, but now it has suddenly arrived.

The population is shrinking drastically. When the first baby boomers retire starting in 2015, the older Germans leaving the work force will likely outnumber young people just entering the labor market.

Germany's current labor force comprises about 44.5 million people. In 40 years, absent an increase in immigration, that number will have dropped to only 26 million. "We already need immigration and births among immigrants today to at least slow the trend," says Herbert Brücker of the Nuremberg-based Institute for Employment Research (IAB).

But that remains a distant goal for Germany. In fact, Germany has gone from a country of immigration to one that is losing more people than it attracts. Net migration has been negative in the last two years, with 56,000 more people leaving the country than arriving since 2008.

It was Economics Minister Rainer Brüderle, from the business-friendly Free Democrats (FDP), who put the issue back on the political agenda two weeks ago. Although Brüderle's proposal to attract qualified specialists to Germany by offering them a welcome bonus was met with derision among many experts, at least it kicked off a long-overdue debate.

Horst Seehofer, the chairman of the conservative Christian Social Union (CSU) -- the Bavarian sister party to Chancellor Angela Merkel's Christian Democrats -- reflexively dismissed Brüderle's idea. Through a spokesman, Chancellor Angela Merkel expressed her displeasure with her economics minister and tried to stifle the discussion. The government, the spokesman said, has no plans to revise its approach to regulating the immigration of highly qualified foreign nations. End of discussion.

But the problems are so pressing that the immigration question will not be laid to rest anytime soon. German President Christian Wulff has asked his staff to examine ways to incorporate the subjects of integration and immigration into his first major speech on Oct. 3, the 20th anniversary of German reunification. Wulff's main concern is not the question of how companies can attract highly qualified foreigners to Germany. Instead, he believes the more urgent problem is that growing numbers of career-conscious Germans are moving abroad. Wulff also wants to see improvements in the education and training of children from immigrant families.

State cabinet ministers are also ignoring Merkel's directive. The lack of skilled employees is "an important obstacle to growth for companies, as we face a global competition for brainpower," says Ernst Pfister, a member of the FDP and economics minister for the southwestern state of Baden-Württemberg. Pfister believes that Germany's Immigration Act still contains too many hurdles. Uwe Schünemann, the interior minister of the northwestern state of Lower Saxony and a member of Merkel's CDU, says: "If we want highly qualified employees to come to Germany from other countries, we must significantly improve the conditions whereby they find employment here."

Politicians in eastern Germany are also worried that their companies could suffer from a shortage of candidates with academic degrees. "In Saxony, the demographic shift is kicking in earlier than in other states," says the state's interior minister, Markus Ulbig (CDU). Only 10 years from now, one in three residents of Saxony will be older than 65. "These sobering facts show that there is no getting around qualified immigration," says Ulbig.

He wants to make studying at German universities more attractive to foreign students, as well as to significantly reduce the high minimum salary levels at which highly qualified workers must be hired under current rules. Ulbig also believes that there is a need to reform residency laws, which continue to deter many foreign specialists.

After its postwar economic miracle, Germany traditionally brought in guest workers to perform the jobs that were poorly paid and required little qualification. Because most moderately educated foreigners were only expected to stay in Germany temporarily, integration policy was long merely a matter of debate with little connection to real needs.

But while the guest workers' menial jobs were the first casualties of technological progress, the people and their families stayed in Germany. The consequences are evident in the second and third generations of those families still in Germany today. In hardly any other country is there such a wide chasm, in terms of qualifications and performance levels, between the children of immigrants and non-immigrants.

It was only during the term of Chancellor Gerhard Schröder, who headed up a coalition pairing his Social Democrats with the Green Party, that Germany first confronted the reality that it has become a country of immigration. But Schröder's Green Card initiative in 2000 was nothing but a half-hearted attempt to address immigration issues. It failed because of the absurdly high income requirements it imposed on potential foreign applicants.

In 2009, only 158 new foreign skilled professionals reached the current minimum income threshold of €66,000 -- compared with total immigration of about 600,000 foreigners a year.

"Germany has significantly more poorly qualified immigrants than other OECD countries. Unlike Canada, the United States, New Zealand and Australia, we have not managed to control immigration in a targeted manner," says IAB expert Brücker. Despite some improvements, particularly for academics and management personnel, the country still isolates itself instead of opening its doors. The 2005 Immigration Act has in fact curbed immigration.

The German Aliens Law is a daunting thicket of legalese, difficult even for lawyers to navigate. Modernizing the system wouldn't be all that difficult.

Klaus F. Zimmermann, the head of the German Institute for Economic Research (DIW), wants the federal government to come up with an "Immigration Agenda." But what might it look like?

Last year, the Expert Council of German Foundations on Integration and Migration (SVR) unveiled a model with three basic elements: a point system to qualify potential foreign immigrants, a bottleneck analysis of where the shortages are and a so-called acute response mechanism for the professional fields most affected by the lack of skilled workers. Although it sounds unnecessarily bureaucratic, the approach makes sense. "This is the only way out of the failed situation we're in at the moment," says SVR Chairman Klaus Bade.

When a qualification is in particularly high demand, it is assigned additional points following the bottleneck analysis. However, these bottlenecks are often not fully recognized, because fewer and fewer employers are reporting their unfilled positions to the government employment agency. The "acute response mechanism" is designed to take effect in cases of urgent demand. The idea is that an employer should be able to hire any highly qualified individual within two weeks, no matter where he or she comes from.

Thomas Bauer, vice president of the RWI economic research institute in the western city of Essen, warns that immigration policy should not be based solely on employers' needs at any given time. "Because these people are expected to live here permanently, their ability to be integrated plays a very important role," says Bauer.

Of course, a new policy doesn't solve all the problems of demographic change. Education efforts must be boosted, young people and unemployed people who lack diplomas or degrees must be provided with substantially better qualifications than they are today, and the future work force must include higher percentages of women and older people. But the idea that a controlled opening of the borders for foreign workers automatically places domestic personnel at a disadvantage is a fallacy. IAB studies show that "unemployment does not rise as a result of immigration -- in fact qualified immigration reduces unemployment," says expert Brücker.

But it is naïve to believe that the willing workers of the world will automatically heed Germany's call to resettle there.

Ulrich Dietz, head of the firm GFT Technologies AG, which places international IT specialists all over world, says: "Everywhere -- in China, India, Brazil -- there are highly motivated, talented young engineers, and it's our job to convince them that they want to go to Germany." But Dietz is also aware that "German society has to open up more. Unfortunately, people from other countries, Indians, for example, are still not fully accepted." According to Dietz, young engineers often prefer to go to the United States, which is more culturally open-minded.

Cihan Kaplan, 32, studied mechanical engineering in the northern German city of Hannover and will submit his doctoral thesis on process engineering in six months. Kaplan, a native of Turkey, has been living in Lower Saxony for the past eight years. But the coming months could be his last months in Germany. "I have no idea where I'm going to look for a job yet," he says, adding that there are many countries where there is plenty of interesting work for engineers. "The best offer wins," he says. Kaplan's new home will be the place with the best career opportunities.