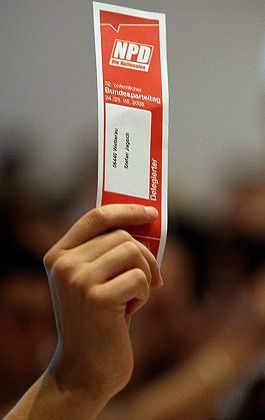 Germany's right-wing extremist National Democratic Party of Germany (NPD) has long found some measure of success in the voting booths of eastern Germany. In Sunday municipal elections in the state of Saxony, the run of success continued.

With the state's 2.9 million voters choosing new county and municipal councils, the neo-Nazi NPD pulled in some 5.1 percent of the vote across the state and looked set for representation in every county council in the state. In two counties, the NPD even came in ahead of the Social Democrats. In terms of total votes, the NPD managed to quadruple its total from 2004, moving from 41,000 votes to 160,000.

Despite the advances made by the NPD, however, the conservative Christian Democrats emerged as the victors of the weekend election, winning 39.5 percent of the vote. The Left Party, successors to the post-Communist PDS, managed 18.7 percent while support for the Social Democrats, came in at just 11.5 percent.

The vote marked the first time the NPD put up candidates in every county in the state. But the extremist party has long been making inroads into the political establishment in Saxony. The NPD won 9.2 percent of the vote in 2004 state parliament elections and the party has eight seats in the state parliament in Dresden, just behind the 13 held by the Social Democrats. Opinion polls routinely show that support for the NPD is approaching double digits in Saxony. Far right parties also have seats in the parliaments of Brandenburg and in Mecklenburg-Western Pomerania, both in eastern Germany.

In one small town called Reinhardtsdorf-Schöna, long known as a bastion of far-right sentiment, the NPD got 25.2 percent of the vote.