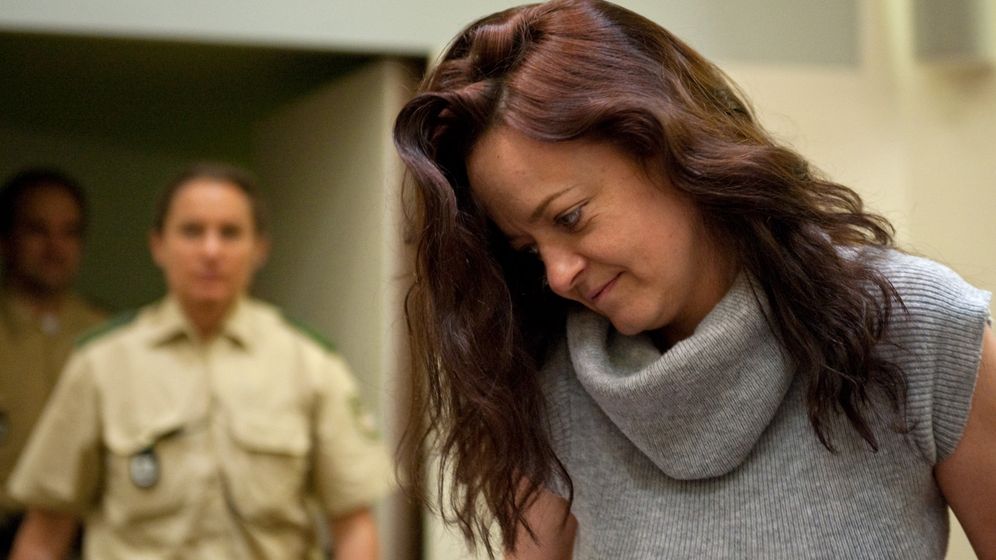 In the beginning, everything went more or less according to plan. The first to be heard was Carsten S., the only one of the five defendants to have come clean in the trial surrounding the case of neo-Nazi terror cell, the National Socialist Underground (NSU). He was followed by Holger G., who gave a statement, though his lawyers said he would not answer any questions about it.

But the other defendants, most notably Beate Zschäpe, the only surviving member of the NSU, along with former far-right National Democratic Party official Ralf Wohlleben, have remained silent. This means that the court will have to scramble to reach the conclusions necessary for a verdict on a case that involves a series of crimes that were allegedly committed over the course of 10 years. The court is essentially addressing 14 criminal proceedings at once: 10 cases of murder, mostly of men of Turkish descent, two bombing attacks, arson and various robberies.

The taking of evidence began on the 14th day of the trial, with the second in the series of murders, the shooting of tailor Abdurrahim Özüdogru in Nuremberg in 2001. The first witnesses were police officers who had been at the scene, as well as a local resident who claimed that she could look straight into the tailor shop from her living room. "I saw him lying there! I swear to you, I saw him lying there!" the teary-eyed woman insisted in court. She also said that she had seen a woman near the shop "who was blonde at the time." Was it Beate Zschäpe?

But the police officer who could have quickly debunked the woman's testimony, because there was in fact no clear view from her living room into the tailor shop, did not testify until four weeks later. In the meantime, the court had turned its attention to the murder of flower vendor Enver Simsek, followed by the widow of victim number four, Habil Kilic. A number of officers who had questioned Carsten S. and Holger G. were also summoned to testify. And then there were the witnesses who had something to say about the case of arson on Frühlingsstrasse in the eastern German city of Zwickau, where Zschäpe is accused of setting the apartment she shared with the NSU's two other members on fire after they committed suicide following a botched bank robbery. Finally, the court heard the testimony of medical examiners, who explained the victims' wounds, and weapons experts, who tried to deduce the position of the shooter from the bullet channels.

The gruesome "Pink Panther" video produced by the NSU was introduced at the beginning of the evidence hearing only coincidentally, simply because the opportunity arose. And who can even still remember the clumsy presentation of photos of the possible murder weapon? More memorable was the witness summoned by the Federal Criminal Police Office, who had been able to get Zschäpe to talk on a trip to her grandmother's house in the eastern state of Thuringia. He behaved like an emcee in court, until it became clear how much deceit was behind this facade.

Things are becoming confused. Rarely is a day in court devoted to a single topic, and the trial is fragmented. The hearing June 24 hearing of one witness wasn't continued until July 24, when hardly anyone could remember what was said in the first hearing. On some days, the court addresses three murder cases at the same time, which is exhausting for everyone involved. People are searching for a common thread leading through the thicket of files and facts.

Alexander Kienzle, representing a plaintiff in an incidental action, recently reminded the court of the original summons, issued in February, "which revealed a logically comprehensible structure of the hearing of evidence," and petitioned the court to return to this system. But how is that supposed to happen? In February, no one anticipated the uproar that would ensue from the allocation of press seats, which would not only lead to a delay in the beginning of the trial, but also stymied the court's ambitious program to structure the criminal trial.

Nevertheless, despite the chaotic presentation of evidence and all attempts to turn it into a scandal, the NSU trial is going better than might have been expected. The presiding judge, Manfred Götzl, has not only quickly gained control of the proceedings, but has also moved things along.

The picture of principal defendant Zschäpe has become clearer, as has her role in the radical right-wing community. There is no longer any talk of Zschäpe as the cake-baking housewife who ran the household for her fellow NSU members, Uwe Böhnhardt and Uwe Mundlos. But she isn't the sister of the disturbed Norwegian mass murderer Anders Behring Breivik, either.

She was apparently a role model for the younger generation of neo-Nazis, who admired her for having crossed the line into illegality. She was allegedly present when weapons were delivered and violence against foreigners was discussed. She must have known who was for and against the idea, and probably had to take her own position. In her apartment, law enforcement officers found city maps with routes marked to possible crime locations. Zschäpe was also probably present when supporters were given instructions. It would be naïve to claim that she had no knowledge of the NSU's plans. Or perhaps she didn't want to know anything. But would the two Uwes have lived with her if Zschäpe's views had differed from their convictions?

Very little is known about the relationships within the trio. But without the perfectly staged appearance of middle-class normality Zschäpe apparently cultivated, which kept the neighbors from becoming suspicious, Böhnhardt and Mundlos would hardly have been able to commit crimes for so many years. Zschäpe took care of the paperwork necessary for renting a car, for example. She was the safe haven, according to the indictment.

The image of a dependent little woman also doesn't coincide with the few statements Zschäpe has made to investigators. Will she remain silent throughout the trial? Or will she eventually break her silence? One can only speculate over Zschäpe's attitude toward her lawyers and their advice.

If prosecutors can prove that she started the fire in her apartment, knowing that she was endangering others, which seems hard to doubt so far, then does this radical solution, this sudden and absolute way of putting an end to her shared life with the two Uwes, suggest that she panicked? That she was especially sensitive? The prosecutors don't know how the gasoline poured out in the apartment was set on fire. This is one of the prosecution's weaknesses. On the other hand, there are witnesses who ran into Zschäpe on the street after the explosion and note how "relaxed" her face had seemed.

Thanks to the judge's extremely precise method of questioning, the case is moving forward one step at a time. Götzl's knowledge of the files is thorough. It wasn't until the 27th day of the trial that a member of the court had any reason to ask a question he had forgotten. The federal prosecutor's office is calmly observing the trial in the knowledge that its indictment is not in jeopardy yet. Fears that the defense would be overwhelmed by the sheer weight of the prosecution, with roughly an additional 60 attorneys involved in incidental actions, have not come to pass yet.

The presiding judge severely disciplines anyone who demands anything that is inadmissible or takes the wrong tone. In one instance, an attorney for one of the victims' families couldn't stop himself from loudly challenging retiree Josef Wilfling, one of the most experienced investigators in Bavaria, on why there was an investigation in the drug community but not into radical right-wing groups. Götzl became annoyed and even unpleasant, but never lost his cool as he has been known to do.

This presiding judge is extremely meticulous in complying with criminal procedure. He gives the parties involved plenty of space, allowing questions to the limit of the acceptable, and only interrupts in extreme cases. It's not his fault that Zschäpe's defense team doesn't exploit this advantage, and only engages in brief skirmishes with the judge.

However, there could be serious conflicts in the future between the public prosecutor's office and attorneys on individual incidental actions. Some of the victims seem unable to make peace with this country as long as they are being sent home with unanswered questions. Depending on the competency of their lawyers, their goals generally do not diverge significantly from those of the public prosecutor's office. But they also want to know why their families were struck by misfortune right beneath the eyes of the Federal Office for the Protection of the Constitution (BfV), Germany's domestic intelligence agency, or whether it is true that the NSU only became radicalized under the influence of a BfV informant. For these people, it is no comfort to say, as former Federal Public Prosecutor Herbert Diemer often does, that: "This is not relevant to this case, but instead belongs before an investigative committee."

This is an opportunity to gain insights into how the defendants came to commit their alleged crimes, and into how right-wing radicalism develops in the first place. The genesis of the murder series is important when it comes to the question of guilt, but it's important in other respects too.