André E., one of the defendants in the largest neo-Nazi trial Germany has ever seen, has a single letter tattooed on eight of his 10 fingers. Together, they spell "Freiheit", or freedom. And it is indicative of a condition for which E.'s co-defendants can envy him.

André E. remains free despite having been charged with supporting a terrorist group, the National Socialist Underground (NSU), a neo-Nazi trio that is suspected of having committed 28 different crimes, including 10 murders, two bomb attacks, 15 armed robberies and one case of arson. Two of the remaining defendants, Beate Zschäpe and Ralf Wohlleben, are in pre-trial detention while two others, Holger G. and Carsten S., are in a witness protection program. Where exactly they are being held is a secret.

They are going to have to remain in custody for a while longer. The trial is scheduled to continue until December of 2014 and on Tuesday, the summer recess began, with proceedings scheduled to resume on Sept. 5.

Still, the trial thus far has provided some insight into how involved the defendants may or may not have been in the crimes committed by the NSU -- specifically by Uwe Böhnhardt and Uwe Mundlos, the two members of the trio that committed suicide in November 2011 after being cornered by the police.

André E., for his part, has done his best thus far to act as though the trial has little to do with him. Though he is generally the first defendant to arrive in the courtroom, sauntering in and throwing himself down in his chair, he makes a show of being uninterested. He indulges himself with gaping yawns and occasionally falls asleep.

Seated just a few feet away, Zschäpe, the trial's primary defendant, has taken a different approach. Generally dressed in a surprising array of business casual outfits, she follows the proceedings closely, flanked by her attorneys Anja Sturm, Wolfgang Heer and Wolfgang Stahl (whose last names just so happen to be the German words for "storm," "army" and "steel," respectively). The charges against her weigh heavily: complicity in the 10 murders, the bomb attacks and the armed robberies as well as membership in a terrorist group, attempted murder and arson.

Yet even after hearing testimony from 98 of the planned 600 witnesses, it remains to be seen whether her direct involvement in, or knowledge of, most of the crimes committed by the NSU can be proven. She herself has thus far shown no indication that she plans to break her silence.

It is a questionable strategy, robbing her of the opportunity to refute incriminating testimony against her. Holger G., who has been charged on three counts of abetting the NSU, has told the court for example that Zschäpe was an "equal member" of the terror cell. He also said that she was present at so-called "system checks" -- meetings held by the cell to prepare should their cover be blown.

Such testimony is perhaps not enough to prove that Zschäpe knew of the crimes being committed by her co-conspirators Böhnhardt and Mundlos. But it could serve to demonstrate the degree to which she was integrated into the underground cell -- and that it would have been difficult for her not to know. Other clues, such as the huge quantities of city maps found in the apartment she shared with Böhnhardt and Mundlos, solidify such suspicions. The maps are of cities where the NSU committed their murders. Furthermore, Holger G. testified that Zschäpe was present when he delivered a weapon the trio had ordered. Still, there is no proof as yet of Zschäpe's direct involvement in any of the crimes.

One charge, however, will be extremely difficult for Zschäpe to escape, that of arson. When her two partners killed themselves in November of 2011, the defendant allegedly set fire to the house in Zwickau where the trio had been living, presumably in an attempt to destroy evidence. It was in the rubble of the burned out house found the murder weapon used in the string of murders committed by the NSU. Witness testimony has directly connected Zschäpe to the setting of that fire.

What Is a Perpetrator?

The arson charge, however, is the least of the defendant's troubles. And her defense attorneys are focusing heavily on the testimony of co-defendant Carsten S. as they seek to convince the court of her innocence. Carsten S. testified that Böhnhardt and Mundlos sought to prevent Zschäpe from learning about at least one of the attacks. He also said that Zschäpe wasn't present when a second weapon was handed over.

What really matters, however, is whether the court will follow the prosecution's line of reasoning, namely that perpetrators aren't just those who commit a crime. Those who help in hiding that crime or those behind it are likewise guilty. Several neighbors of the trio in Zwickau have testified that Zschäpe was instrumental in maintaining the NSU's façade of normality.

On each day of hearings since the trial started in May, around 100 visitors have streamed into the courtroom in Munich. Family members of the victims have made frequent appearances, but so have members of the right-wing scene, as well as anti-fascist activists. Even on the last day before the summer recess began, there wasn't a single empty seat.

They have been witnesses thus far to a trial of unparalleled dimensions: 11 defendants, more than 80 co-plaintiffs and in excess of 600 witnesses. Head judge Manfred Götzl has done what he can to keep the proceedings moving apace and has largely well-managed the co-plaintiffs, many of whom have proven beneficial with trenchant follow-up questions and clever observations.

The most difficult role thus far has been that played by court psychiatrist Henning Sass, who has sought to shed light on the personal relationships within the trio. Testimony from Holger G., Carsten S., and the trios many neighbors in Zwickau has done little help on that score. It has, however, become clear that both Mundlos and Böhnhardt were introverts and they would have had difficulties living underground without the help of Beate Zschäpe.

Most of all, however, the trial has thus far managed to assuage concerns that proceedings might not be as structured and precise as the situation demands.

Indeed, cause for disquiet has come from elsewhere -- from the increasing indications that the terror cell may actually have had more helpers than previously thought. One neighbor, for example, testified that she once saw Mundlos and Böhnhardt through an open window with additional men. One of the central questions that has arisen as the trial has progressed pertains to the size of the help network that kept the NSU secret for so long.

Holger G. could be in a position to shed light on such questions. But he declined to provide testimony beyond the statement he provided at the very beginning of the trial. On Tuesday, Judge Götzl's last words before the recess were reserved for the co-defendant, asking Holger G. if he would like to make himself available for additional questions.

The implication was clear. Should he ultimately decline, his hopes for leniency from the court might be in vain. 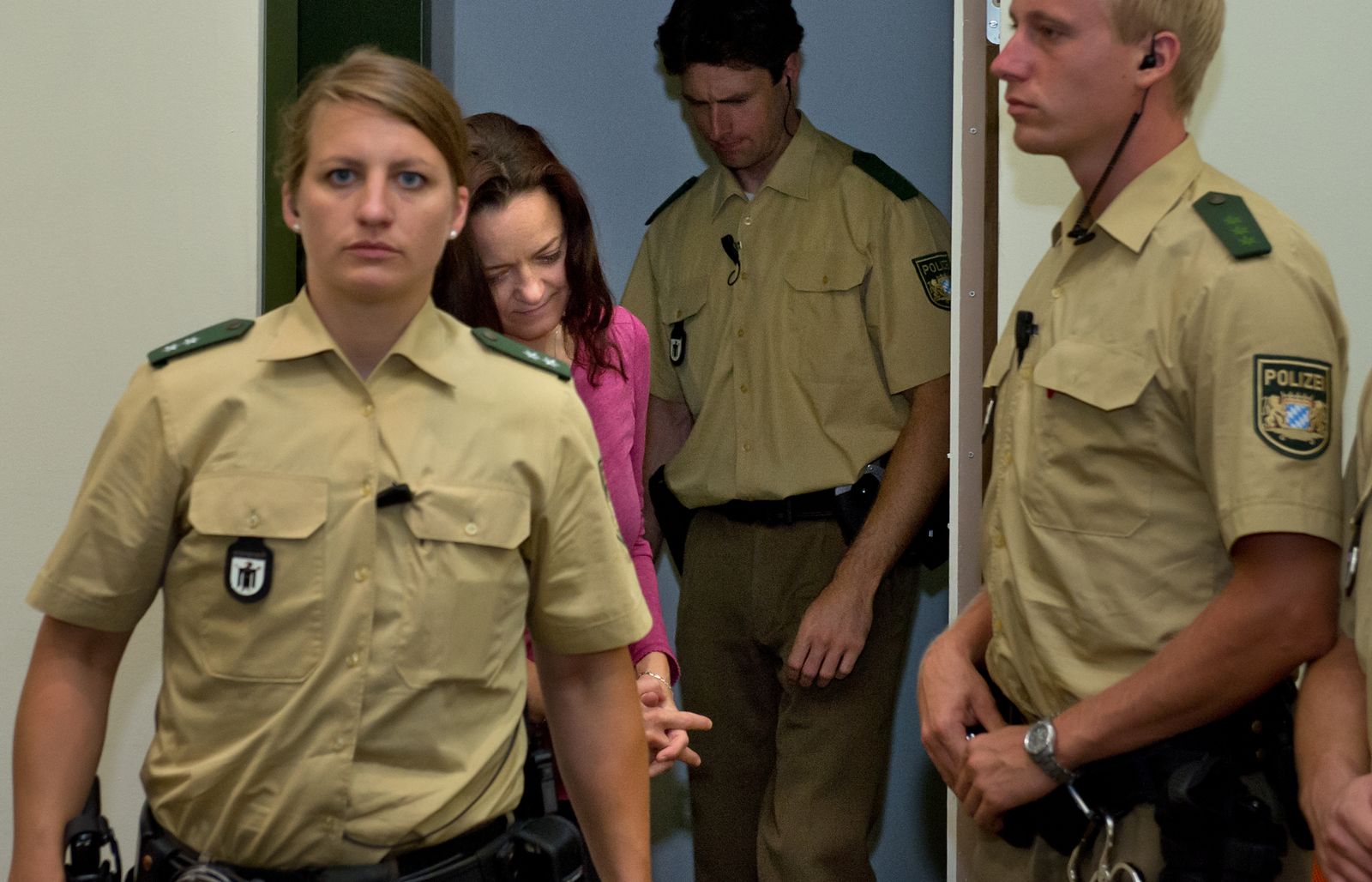 Beate Zschäpe enters the courtroom for the last day of testimony before the summer recess.