The trial of neo-Nazi Beate Zschäpe, accused of complicity in racially motivated murders, resumed on Tuesday after an eight-day adjournment that had angered the families of the 10 victims -- eight men of Turkish descent, one Greek man and a German policewoman.

The defense lawyers filed a flurry of fresh motions on Tuesday, requesting that the trial be relocated to a bigger courtroom and complaining that their desks were so close that the judges would be able to see their notes.

Judge Manfred Götzl had adjourned the trial on the first day, May 6, to consider a defense complaint that he was biased against them because he had ordered that defense lawyers be frisked before entering the courtroom. He rejected that motion and also denied the request to have the venue moved, declaring: "Criminal trials are held in public but not for the public."

The second trial day brought confirmation that Zschäpe, who faces a possible life sentence if convicted of the main charge, is unlikely to testify in the trial. When Götzl asked her to provide information about herself, one of her attorneys, Wolfgang Heer, said: "She won't make any statements about her person."

Zschäpe is alleged to have formed the National Socialist Underground (NSU) terrorist group with Uwe Mundlos and Uwe Böhnhardt and to have been complicit in the killings committed between 2000 and 2006 as well as in a 2004 bomb attack on a district of Cologne where many Turks live, injuring 22.

Four alleged accomplices are on trial with her. Mundlos and Böhnhardt committed suicide in November 2011.

As Federal Prosecutor Herbert Diemer read out the indictment, Zschäpe, clad in a light grey suit and a white blouse, her long dyed brown hair gathered in a ponytail, sat expressionless, staring in front of her. Diemer accused her of involvement in 10 murders and of being a member of a group whose aim was to "commit murder and criminal acts dangerous to public safety" in order to intimidate the public and "wreak major damage to the state."

The NSU trio, Diemer said, had believed the German nation was under threat and had decided to target people of Turkish descent, "selecting them arbitrarily and killing them through execution-style shootings."

They obtained the murder weapon used in all the killings, a Ceska 83 with a silencer, in late 1999 or early 2000 but had a total of more than 20 firearms "including two submachine guns with more than 1,600 rounds of ammunition," said Diemer. They also had a camouflaged firing device designed "to fire off a salvo of bullets without being spotted by the public."

Zschäpe showed no visible reactions, even when Diemer reached a point that drew gasps from the families of the victims present in the courtroom. He said the nine immigrant victims had all been completely unaware of the threat and defenseless. In each case "they were shot in the head from a short distance and taken completely by surprise in an everyday situation."

He read out the names of the victims from the first one, Enver Simsek, a flower wholesaler shot at his mobile flower stall in Nuremberg on September 9, 2000, to Halit Yozgat, murdered in his Internet cafe in Kassel on April 6, 2006.

In each case, Zschäpe was involved in the planning and the preparation of the crimes, including in the procurement of weapons, according to the indictment.

The only purpose of the NSU, said Diemer, "was to kill people."

The trial will continue on Wednesday.

The police never seriously considered that the motive may be racismand instead suspected that the victims themselves had links with criminal gangs. 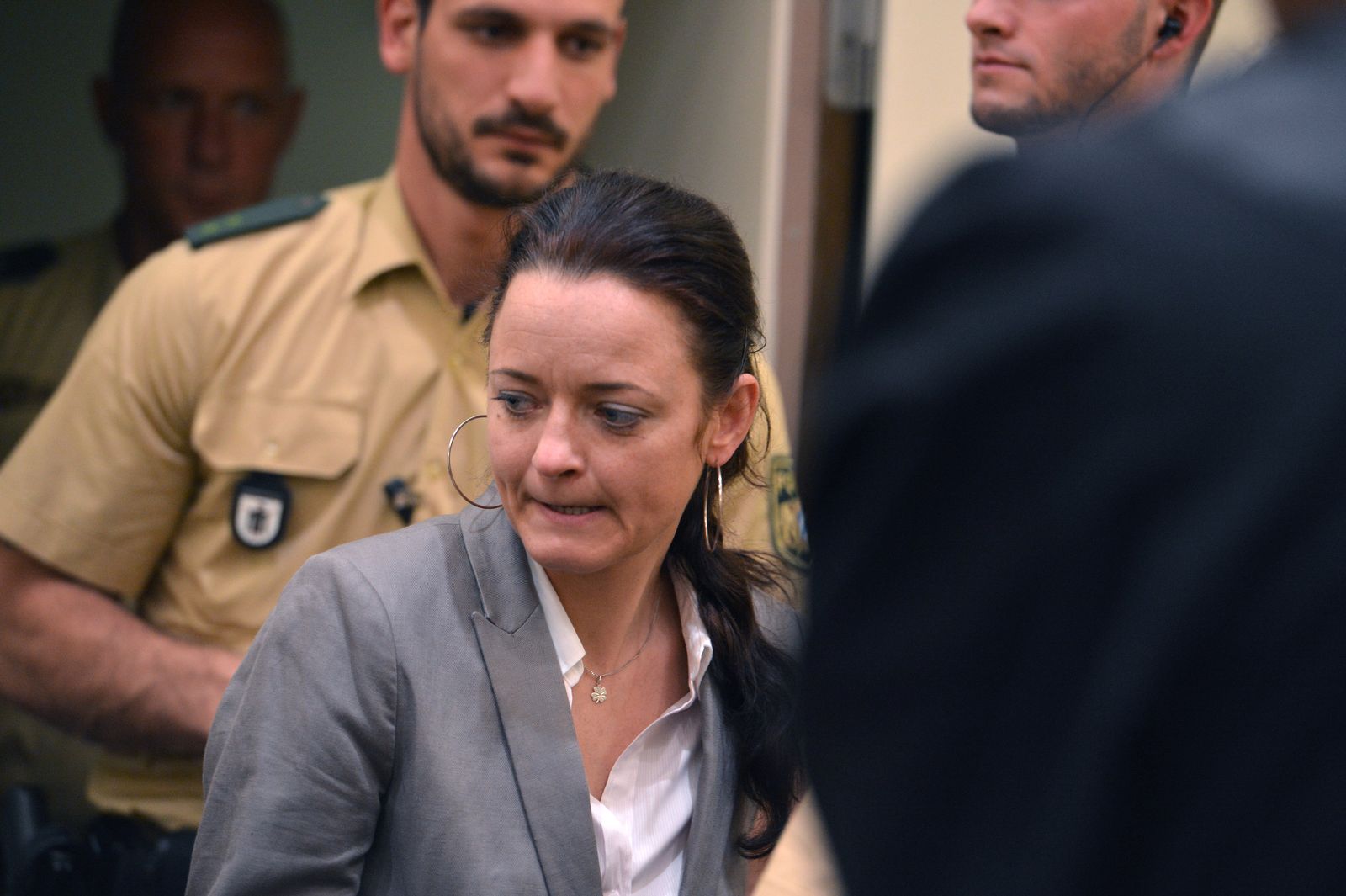 Beate Zschäpe on the second day of her trial in Munich.