Berlin and Brussels are increasingly prepared to impose massive embargoes on Iran unless Tehran signals soon that it's ready to compromise in their nuclear dispute. 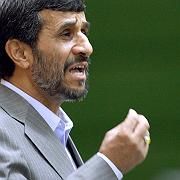 SPIEGEL has learned that Germany and the EU are considering stopping all exports of gasoline to Iran, which according to analysts' estimates depends on imports to cover 30 percent of its gasoline supplies, even though it exports crude oil.

Diplomats are also considering imposing further restrictions on shipping and air traffic to and from Iran, for example by banning Iranian ships or aircraft from docking or landing in the EU.

Major insurance companies that insure many freight shipments to and from Iran, such as Lloyd's, may be foreced to cease such deals.

The German government will initially try to get these additional sanctions passed by the UN Security Council, where veto powers China and Russia have been hesitant on measures against Iran. But senior German diplomats have said the EU and the US would be prepared to impose "very strict sanctions" on their own.

Western nations including the US say Iran's nuclear program is aimed at making weapons. Iran says it is for power generation only and has refused to halt uranium enrichment despite three rounds of UN sanctions.

The US Congress is discussing draft legislation to impose sanctions on firms that supply Iran with gasoline. But the Americans and Europeans don't appear to have come up with joint lists of punitive measures yet.

If Iranian President Mahmoud Ahmadinejad remains unwilling to negotiate with the West, it is likely that a new round of sanctions could be launched during the UN General Assembly in New York at the end of September.

Leaders from the US, Russia, China, France, the United Kingdom and Germany will be discussing increasing the pressure on Iran during a G20 summit scheduled for the end of September in Pittsburgh, Pennsylvania.