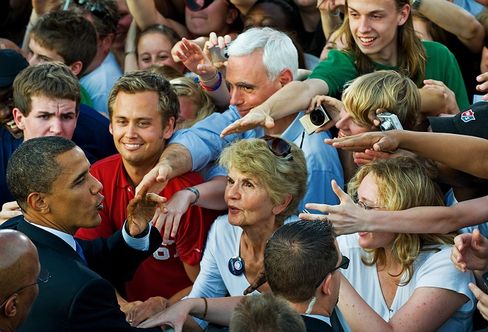 The crowd reaches for US Democratic presidential candidate Barack Obama after his speech.

They came from all over the world to hear US presidential candidate Barack Obama speak in Berlin Thursday evening. There were many -- over 200,000 according to police estimates -- and their expectations were high.

The gates to the area were lifted at 4 p.m., and those who came early enough crammed around the Siegessäule, or Victory Column, that sits in the middle of a giant traffic circle in Berlin's central Tiergarten park. Thousands and thousands of others lined up like a giant, closely packed phalanx for about a half kilometer down the broad avenue stretching between the column and the Brandenburg Gate.

Thousands of others avoided the crowds entirely, lounging picnic-like with their families in the grassy woods flanking the avenue, drinking beer and chatting through much of the speech.

Expectations for the speech were sky-high in a city that had seen several US presidents -- Kennedy, Reagan and Clinton -- deliver important speeches down through the years.

"I want to be here for our 'Ich bin ein Berliner' speech," Julie Hagedorn, 38, a Canadian living with her German husband in Berlin told SPIEGEL ONLINE before the speech. "I want to hear it with my own ears when Obama says 'Ich bin ein Europäer (I am a European)."

This sentiment of hoping that the speech would signal the beginning of a new relationship and healing process between Europe and the United States was shared by many of those in the crowd. "This is a rare event," said Alla Samkova, 68, a native Muscovite who has been living in Berlin for 45 years. "In the end it doesn't matter what he says; it only matters that he's here."

Still others -- many others -- expressed joy at being able to get a far-off glimpse of the man promising so much change for the US and the world. "To put it cynically, it's always nice to see a country getting rid of its own junta, even if it elected it itself," said Carsten Winkler, 43, a native Berliner working in the solar industry. "I'm here to show support for the man who might make that happen."

Children were also a large part of the crowd, sitting on shoulders or being wheeled slowly -- and often impatiently -- through the large masses of people. Patricia Gusovius, 48, of Berlin, brought her 5-year-old daughter Hanan to the speech particularly because of Obama's background. "I'm here because my daughter has an Egyptian father and I'm German," Gusovius told SPIEGEL ONLINE. "She can see that Obama is a mix, like her. Mixed race families have a hard time in Western culture, and he can be her role model." After excitedly awaiting her turn to speak, Hanan added: "We spent a whole day at school learning about him."

The crowd also seemed full of thousands of tourists who were already in Berlin and happy to get a chance to see the American politician speak. "We didn't even realize it was happening till we saw it in the hotel's free newspaper this morning," Thea Gaasbeek, 50, a history professor from the Netherlands said with a laugh. "But what a treat."

Reactions to the almost 30-minute speech hit both extremes. "It was excellent, not good, but excellent," said Henry Aikins, 63, a pensioner from Berlin, though originally from Ghana. "It was good he didn't just talk about America, but Africa and other continents as well.  He really moved me in my heart."

Anton Kliegl, however, a 50-year-old managing consultant from Regensburg, didn't see things that way. "In general I have to say I was a bit disappointed," Kliegl said. "The coverage of the primaries created this impression that he was an amazing speaker who could carry away his audience. He didn't do that tonight. I really expected more."