The telephone conversation between German Chancellor Angela Merkel and US President Barack Obama last week had been going quite some time, but Obama still hadn't asked the question that Merkel knew was coming. The chancellor had just learned that the US planned to send an additional 30,000 troops to Afghanistan. She also knew that in a few hours the president was going to specify a date for the beginning of a US withdrawal.

But Obama had still not broached the one question that interested Merkel most: How many additional troops were the Germans expected to send to Afghanistan?

Never one to waste time on small talk, Merkel ultimately asked the question herself. So many numbers have been mentioned in recent weeks, she said. She had heard that some expected 2,000 additional German troops, while another source had even mentioned 2,500. Was this the troop level increase the American administration expected from Germany, she wondered?

He had heard the same numbers mentioned, Obama replied. They didn't come from his staff, though, rather from military experts -- in other words, nothing official. Although his intention was to reassure Merkel, the US president left no doubt as to what he really wants. In his view, the Germans should make a stronger commitment to the war in Afghanistan.

No Less Complicated for Merkel

Now it was Merkel's turn to be vague, as she explained to Obama that she could not reach a decision on the German contribution before a major conference on Afghanistan scheduled to be held in London in late January. And to avoid sounding too defensive, she added: "After all, you have to ask Congress first, as well."

Last Tuesday's conversation between the US president and the German chancellor lasted about 20 minutes, but it didn't make things any less complicated for Merkel. There are already 4,500 German troops stationed in Afghanistan, and on Thursday Germany's parliament, the Bundestag, extended the current mandate by an additional year, despite growing doubts concerning the purpose of the mission. And now, if Obama has his way, even more young Germans will be deployed to Afghanistan.

Merkel doesn't want to flatly deny Obama's request. But if she satisfies the American president, she could face growing discontent among voters at home, where a significant majority believes that Germany should not be involved in the war at all. According to a survey conducted last week for the public television station ARD, fully 69 percent of Germans favor a quick withdrawal of the Bundeswehr, Germany's armed forces.

With less than two months to go before the Afghanistan conference, there isn't much time left to find a way out of the dilemma. By the end of January, Merkel will have to explain how she intends to continue conducting a war that has long ceased to be the conflict German soldiers entered into in 2002. At the time, there was talk of democracy, human rights and girls' schools. But by the time of the manipulated elections in August -- and the West's acceptance of their outcome -- it was clear that this concept had failed.

Today the only real objective is to do everything possible to prevent the radical Taliban from regaining power, as well as to begin withdrawing troops as quickly as possible. This change of strategy is in Germany's interest. Nevertheless, it is unclear how long voters will continue to accept the notion that German soldiers are killing and being killed, merely to stabilize a corrupt system.

When the first Bundeswehr soldiers arrived in Afghanistan in 2002, they were fighting what was perceived as the good fight. The Germans trained police officers and built roads, schools and bridges. But as of last Thursday, when Defense Minister Karl-Theodor von Guttenberg addressed the Bundestag to discuss the bombing of two tanker trucks on Sept. 4, it is now official that the Germans are not always the good guys in this war. The attack claimed the lives of about 140 people, including many civilians -- and was ordered by German Colonel Georg Klein.

Guttenberg told the parliament that he had to revise his initial assessment. After reviewing all reports, he said, he had concluded that the bombing had not been militarily appropriate. This was in contrast to remarks he had made in early November, when he said that the attack was necessary. But now that he had seen new reports, Guttenberg said, he could no longer stand by his earlier position.

Although Guttenberg's about-face merely confirms what was already known, his more recent statement will only amplify the current discontent with the mission. A Bundestag investigative committee will soon begin examining whether the government reacted correctly to the events near Kunduz. This too will only fuel growing doubts within the population.

Obama hasn't made it any easier for the German government. He designed his new strategy without involving Washington's allies, which leaves them with only two choices: play along or refuse to play along. In doing so, Obama is creating a new "coalition of the willing," a term coined by his predecessor, George W. Bush, with the only difference being that Obama's choice of words is not as bleak.

This leaves Merkel with the choice of either casting her lot with Obama and sending significantly more troops to Afghanistan, as the Poles and British have done, or stonewalling along with French President Nicolas Sarkozy. The chancellor does not want the issue to lead to a rupture with Washington and a new rift within NATO. But if she prevails with a new mandate for more German troops, Afghanistan will become her war once and for all.

Militarily speaking, whether Germany sends additional troops to Afghanistan is not crucial, nor does the success of the American strategy depend on it. But the issue is critical on the domestic front. In other words, the war will not be won because of additional Bundeswehr soldiers, but Merkel stands to lose a great deal by deploying more troops to Afghanistan.

If she does, she will run the risk of destroying the consensus with the Social Democratic Party (SPD). So far, Afghanistan has been a war for which the two major parties have held joint responsibility. This has muffled criticism and increased the legitimacy of the mission.

Excuse to Abandon the Mission

In last Thursday's vote on extended the mandate, the Social Democrats proved to be surprisingly united, with only 11 members of parliament voting No and two abstaining. In the future, however, such votes are unlikely to be as clear-cut. "There are those within our ranks who could use the most recent events and the upcoming potential expansion of the mandate as an excuse to abandon the Afghanistan mission altogether," says Hans-Peter Bartels, a defense expert and an SPD member of the Bundestag.

The SPD party leadership has likewise supported the Afghanistan mission. It was, after all, an SPD and Green Party coalition government that sent the first German soldiers to Afghanistan in the first place. But now that the SPD is no longer in government -- and in the wake of the Kunduz affair -- it is becoming increasingly tempting for the SPD to slip into the more comfortable role of the "party of peace."

Former Foreign Minister Frank-Walter Steinmeier, now the SPD floor leader, is still keeping watch to ensure that this does not happen. But the question now is how long the party leadership can and wants to overcome skepticism within its own ranks. Like Merkel, the SPD, for now, is devoting its efforts to playing for time. The government, say SPD officials, should first clarify what it wants, and then the party will respond.

But the SPD is avoiding the key question: What will it say if the government decides to increase troop levels? At this point, no one in the SPD leadership is specifying the party's position. "I cannot say, at this time, what my personal position and that of the SPD will be," says party leader Sigmar Gabriel, adding that the party will have to "openly discuss" the matter in the coming months and "form an opinion within the SPD."

For this reason, officials at the Chancellery are concerned that the investigative committee could exert political pressure on Merkel and Guttenberg. Even if the committee does not bring any new information to light, it will heighten the impression that the government tried to cover something up. This will not make it easier to pass a new mandate for more troops.

The defense ministry, in particular, is worried that two key figures in the Kunduz affair could supply new material against the government. Guttenberg dismissed Bundeswehr Inspector General Wolfgang Schneiderhan and Defense Ministry deputy Peter Wichert because they were allegedly withholding information. Both men would have a personal motive to talk.

Schneiderhan, at any rate, does not seem to be averse to causing trouble for his former boss by taking his information public. In a farewell speech to invited guests at the Defense Ministry last Thursday, he said: "I am grateful that I can now open the tight vest of loyalty somewhat." He added that he was looking forward to no longer just providing answers, but also asking a few questions of his own.

Just how damaging Schneiderhan's potential revelations could be to the government depends partly on how the upcoming proceedings are organized. The administration has a few trumps in its hand, in this case. Because the Bundestag Defense Committee has declared itself as the investigative committee, the principal hearings will be internal, unless the governing parties agree to a public hearing.

Even if the investigation committee does not turn out to be a political success for the SPD, this still doesn't solve the government's problems. Last Friday, NATO announced it would send an additional 7,000 troops to Afghanistan from the 25 member states. Prior to the announcement, Germany was asked to send an additional 2,000 soldiers to Afghanistan. Foreign Minister Guido Westerwelle said in Brussels that the call for more German troops is "not appropriate" -- an odd statement, in light of the decisiveness of many allies.

The debate within the government over troop levels has been underway for some time. From the standpoint of many generals at the defense ministry, infantrymen are most needed: to protect the Afghan population, to protect their own camps and to secure supply routes leading through Kunduz Province.

Merkel and Westerwelle do not believe this to be politically achievable. Instead, they want Germany to do more for the training of Afghan security forces. Although this would require sending additional police officers and soldiers to Afghanistan, it is easier to sell the idea of deploying trainers than combat troops. Besides, the government wants to make it clear to the public that withdrawal is in sight. Whether Merkel will name a concrete date for withdrawal, as Obama has done, is unclear. The Chancellery and the foreign ministry believe it would be unwise. Speaking to the Bundestag, Westerwelle said only that the administration intends to "develop an opinion on withdrawal within this legislative period." This leaves all options open.

Merkel and Westerwelle are consistently sticking to their position, so as not to give the SPD an excuse to reject a new mandate. They insist that specific details will not be provided until after the Afghanistan conference. Before that, they say, goals and strategy should be determined, as the SPD has demanded.

In reality, however, important decisions will have to be made first. The Bundeswehr must prepare its people for the mission, it cannot wait until next year to begin such preparations. The decision over the future Afghanistan strategy will not be quite as transparent as Merkel has promised. 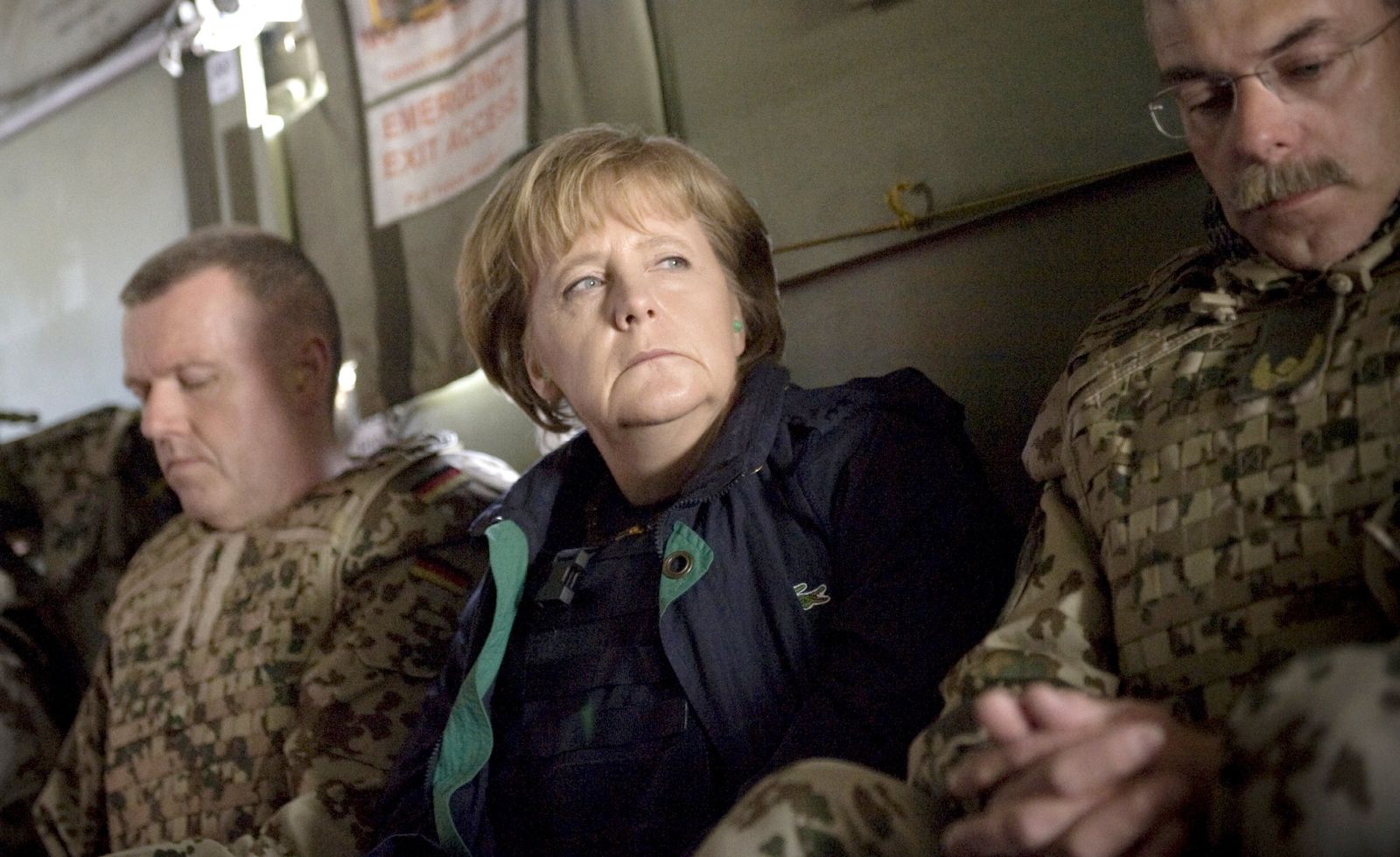 German Chancellor Angela Merkel on a visit to Afghanistan earlier this year.