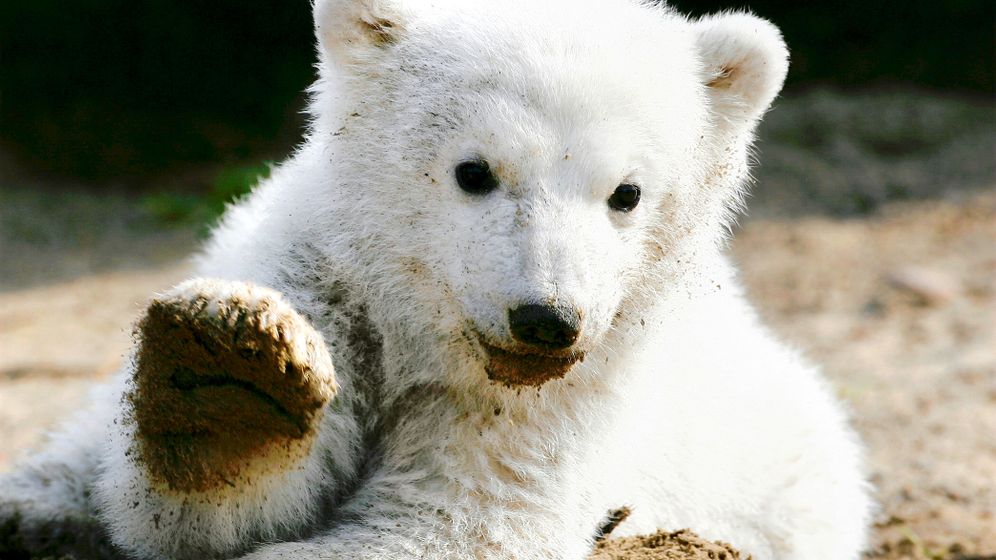 Fairytales aren't meant to end like this. Knut, the polar bear who gave so many people so much joy, deserved a happy-ever-after. He has been deprived of it, and millions of people around the world are feeling the loss after his untimely death on Saturday, at just four years and three months.

On Sunday, hundreds of people gathered at Berlin Zoo to lay down flowers and leave messages. "Thanks for all the happy memories," "Bye Knut," "We loved you so much." Many were in tears. "He was like our child. We watched him grow up," said one elderly lady, with tears running down her face.

People spent a long time gazing at his empty enclosure. The sunshine brought no comfort.

The scene was all the more poignant because it was almost exactly four years ago, on March 23, 2007, a similarly sunny spring day, that Knut toddled happily onto the world stage and into people's hearts when he made his first public appearance at Berlin Zoo. It was a global news event. International broadcasters provided live coverage, satellite trucks were parked in front of a startled rhinoceros and hundreds of photographers and journalists jostled to catch a glimpse of him.

There he was, flanked by the German environment minister at the time, Sigmar Gabriel, and Thomas Dörflein, his devoted keeper. Within seconds, the snow-white ball of fur with black button eyes, playful and mischievous, had gained a fan club that stretched from Berlin to Sydney.

What was all the fuss about? Knut may have been the first polar bear born in Berlin Zoo for over three decades, but new births of the species in captivity weren't uncommon around the world.

There can be no denying that the media turned him into a star. He was a product of the cult of celebrity, and he sold newspapers. SPIEGEL ONLINE was among the news sites that gave him blanket coverage, because so many people would read the stories. The Berlin Zoo, initially reluctantly, went along with the hype in order to make money, but also because it had little choice.

That, however, is only part of the story. Knut was a special bear because he had real character. That spring and summer of 2007, he entertained as many as 15,000 visitors a day by biting Dörflein's backside, hiding under a green blankie and chasing after a ball.

Too Friendly for a Killer

Later on, as he grew, he would stand on his hind legs with his front paws up, seemingly waving to visitors. He would even play with them, grabbing his ball with his snout and tossing it over the moat for them to throw back. He would lay on a veritable Knut Show. It may seem banal, but he had a very friendly face, far too friendly for the lethal predator he was supposed to be. That was the essence of his charm.

Had he been put out into the wild, one could imagine him spending his time sitting on an ice floe, waving at the seals and waiting for a trawler to come by to throw him some croissants -- his favorite food -- and a football.

Animal rights campaigners claim that his almost-human behavior was part of a disorder caused by hand-rearing, and by his strange life in the public eye, facing flashguns and constant shouts of "Knuuuut" from adoring fans.

That may be so. But life tells strange stories, and Knut's had a tragic inevitability. Had the Berlin Zoo not raised him in an incubator and hand-reared him after his mother Tosca rejected him, he would have died. And, let's face it, he was unfeasibly cute even by polar bear cub standards. If he hadn't been, Berlin tabloids wouldn't have got the celebrity circus going by publishing photos of him.

The pictures showing him chewing on a toilet brush, sleeping in his box with his cuddly toys, lying on his back with his paws in the air or standing up with his little tongue hanging out and holding onto the hands of Dörflein, his devoted surrogate parent and friend, were irresistible.

When a wildlife expert demanded he be put down to spare him the behavioral problems he would suffer from hand-rearing, the public uproar was predictable, and the bear came a decisive step closer to superstardom. Kill cute Knut? Murder this furry little ball of fun? Are you nuts? Although the call had never been taken seriously, the stories got international attention. By the time Knut was presented to the public, his celebrity was already feeding on itself, and a rollercoaster life of glamour and fame beckoned for the unsuspecting cub.

He soon featured on the cover of Vanity Fair magazine with Leonardo di Caprio, and spawned a range of merchandise ranging from cuddly toys to marshmallows and expensive porcelain figurines. Berlin Zoo even had to hire security guards to help organize the crowds.

Knut's relationship with Dörflein, his bearded, bear-like keeper, who slept on a mattress next to his charge, bottle-fed him a special porridge, burped him, rubbed baby oil into his fur and patiently played with him, was highly entertaining and delighted the crowds.

All that summer, Knut made people forget their troubles. This was a sunny fairy tale. The spectacle of man and beast interacting so happily satisfied people's desire for harmony. Maybe it was an illusion, but it looked real enough. He became an icon of the city. Seeing Knut became part of every tourist's itinerary, up there with visiting the Brandenburg Gate. Millions came to visit him.

But fate started to catch up with him. His cuteness wore off as he mutated into a chubby bruiser. Dörflein got strict instructions from the zoo management not to go near him any more. Visitor numbers dwindled. Knut started to look lonely in his enclosure. But his diehard fans, many of them middle-aged women who visited him almost daily, remained loyal. And the zoo continued to give him birthday cakes -- fish and vegetables frozen in ice -- every December 5.

In September 2008, when Dörflein died suddenly of a heart attack, the story of Knut took its first tragic turn. Would he cope with the loss of his friend? Was Knut's life blighted? Would he come to a sticky end himself, like so many child stars who can't cope with their fame in later life?

Attempts to get him to make friends with a female polar bear, Gianna, who joined him in his enclosure for a few months, met with mixed success. She would swipe his snout and steal his food, but they seemed to get on all right by the time she returned to her zoo in Munich.

In 2009, Knut fans in Berlin mounted a successful campaign to force the zoo to abandon a plan to move Knut to another zoo.

Then in 2010, he was moved to a bigger enclosure with three older female polar bears, including his mother Tosca. Knut's fans said he couldn't cope with the bullying that ensued. The cause of his death has not been established yet, but animal experts and fans say it could have been an epileptic fit brought on by stress.

"He wasn't happy here. They kept snarling at him and pushing him into the water," Annemarie Bürger, a pensioner who came to see Knut every week, told SPIEGEL ONLINE at Berlin Zoo on Sunday, in between sobs. "He died much too soon."

Another mourner, Roswitha Klekotta-Last, said: "He'll be reunited with Dörflein up there now. That's a bit of comfort."

In Memory of a Bittersweet Tale

Berlin Zoo, understandably, had tried in recent years to treat Knut like any other polar bear. But the strange circumstances of his life had made him unique. That contradiction may have -- inevitably -- contributed to his early death.

What remains? Berlin Zoo has said it may have Knut stuffed, but his supporters find that idea unbearable.

There has never been an animal burial at Berlin Zoo, and simply incinerating him like any other animal would seem deeply inappropriate given what Knut has done for the zoo, for Berlin and for raising the awareness of the plight of polar bears in the face of global warning.

Whatever happens to Knut's remains, the city should put up a monument in his honor, large and prominent, to remind visitors for decades to come of the bittersweet tale of an innocent bear who enchanted millions.