With Tom Cruise in town this week to promote his new Nazi drama Valkyrie, a district of Berlin has quietly posted a warning sign near the city's Scientology headquarters, explaining that local authorities mistrust the organization. 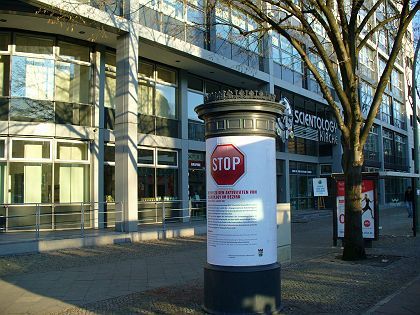 An official warning poster, on a kiosk just outside the Scientology office in Berlin.

A public kiosk on the sidewalk in Charlottenburg bears a poster with a big stop sign and a printed message: The district of Charlottenburg-Wilmersdorf "expresses its opposition to the activities of the Scientology sect in this district and in Berlin, and hopes that responsible parties in Berlin will watch the Scientology sect with a critical eye in the near future, and that any new information will be made public."

Cruise is one of the world's most prominent Scientology members. Posters advertising his new film, about the 1944 attempt by Lt. Colonel Claus Schenk Graf von Stauffenberg to assassnate Adolf Hitler, are plastered across the German capital these days and the film hit cinemas here on Thursday. Cruise said little about Scientology during his publicity tour through Berlin earlier this week, and the poster doesn't mention him. It only says that local officials see "a possible danger to democratic society" in the "increased activities of Scientology in this district."

The Scientology headquarters in Berlin opened in January 2007 amid national controversy.

The German government has never considered the US-based "Church of Scientology" a religion, refuses to exempt it from taxes and spies on it regularly for "anti-constitutional activity" because of aggressive recruitment practices. During a failed attempt to ban Scientology in late 2007, German Interior Minister Wolfgang Schäuble told the Bild am Sonntag newspaper, "fundamental basic and human rights like the dignity of man or the right to equal treatment are restricted or abrogated," by the organization. "It rejects the democratic system."

Sabine Weber, president of the Berlin chapter of the Church of Scientology, called Schäuble's remarks "unrealistic" and "absurd" at the time, and a government poster outside the chapter headquarters may not ease the Scientologists' fear of government persecution.

Some lawmakers in Germany have said the government won't find enough evidence to ban Scientology, but that its recruitment practices are "problematic" because, they say, it is more of a business than a religion and can be difficult to leave.