It is no secret that the German authorities' handling of the massacre of Israeli athletes during the 1972 Munich Olympics was characterized by bumbling and cover-ups. But new documents seen by SPIEGEL reveal that officials concealed even more -- and more blatant -- errors than previously thought. Indeed, there were even several warnings prior to the Games that an attack was imminent.

Previously classified documents from investigative officials, embassy dispatches, and cabinet protocols released to SPIEGEL by the Chancellery, Foreign Office and state and federal intelligence agencies have revealed the lengths to which officials went to hide their mistakes.

In the attack on Sept. 5, 1972, Palestinian terrorists killed 11 members of Israel's Olympic delegation, along with one German police officer. Five of the eight terrorists from the Palestine Liberation Organization (PLO) terrorist group called "Black September" were also killed during the botched rescue attempt by German police at the Fürstenfeldbruck military airport, where the hostages were being held in two helicopters.

Already on Sept. 7, just one day after the memorial ceremony for the victims took place in Munich's Olympic Stadium, a Foreign Ministry official told a special sitting of the federal cabinet what would ultimately become the maxim for both Bavarian and West German officials. "Mutual incriminations must be avoided," a protocol for the meeting reads. "Also, no self-criticism."

Just how closely this advice was followed can be seen in documentation from both the federal government and the Bavarian state government, which falsely described the "precision" with which the terrorists carried out their attack. In reality, officials knew that the "Black September" members were actually so poorly prepared that they even had trouble finding hotel rooms in Munich before their attack.

On the day of the attack, the Palestinians were even known to have gone right past the Israelis' apartments in the Olympic village, encountering athletes from Hong Kong on an upper level of the building instead. An "analytic evaluation" of the attack by the Munich criminal police later explicitly determined that the terrorists had "conducted no precise reconnaissance" ahead of time.

But none of these details were revealed to the public. The fact that Bavarian state prosecutors in Munich were pursuing an investigation against police president Manfred Schreiber and his chief of operation on suspicion of negligent manslaughter also wasn't mentioned in the document.

Concrete warnings of a potential attack also went unmentioned, despite the fact that they were so clear that their dismissal remains difficult to comprehend. On Aug. 14, 1972, a German embassy officer in Beirut heard that "an incident would be staged by from the Palestinian side during the Olympic Games in Munich." Four days later, the Foreign Office forwarded the warning to the state intelligence agency in Bavaria, along with the recommendation to "take all possible available security measures" against such an attack.

Security agencies didn't even register warnings that appeared in the press. On Sept. 2, three days ahead of the deadly hostage-taking, the Italian publication Gente wrote that terrorists from Black September were planning a "sensational act during the Olympic Games." Only later -- two days after the bloodbath in Munich -- was the warning put on record through a tip-off from the Hamburg criminal police.

Responsible officials seem to have attempted to erase any evidence of their failures to prevent the attack, the documents show. A few days afterwards, a chief police commissioner seized information concerning 26 potential crisis scenarios for the Munich Olympics, which had been prepared by a police psychologist to aid in preparing a security concept for the games. One of the scenarios involved an attack by Palestinian terrorists at the Olympic village.

When the Bavarian state intelligence agency inquired after the materials, police officials acknowledged that they had been created and discussed during preparatory seminars ahead of the Olympics, but indicated that a written record was "not available." The documents are still missing today. 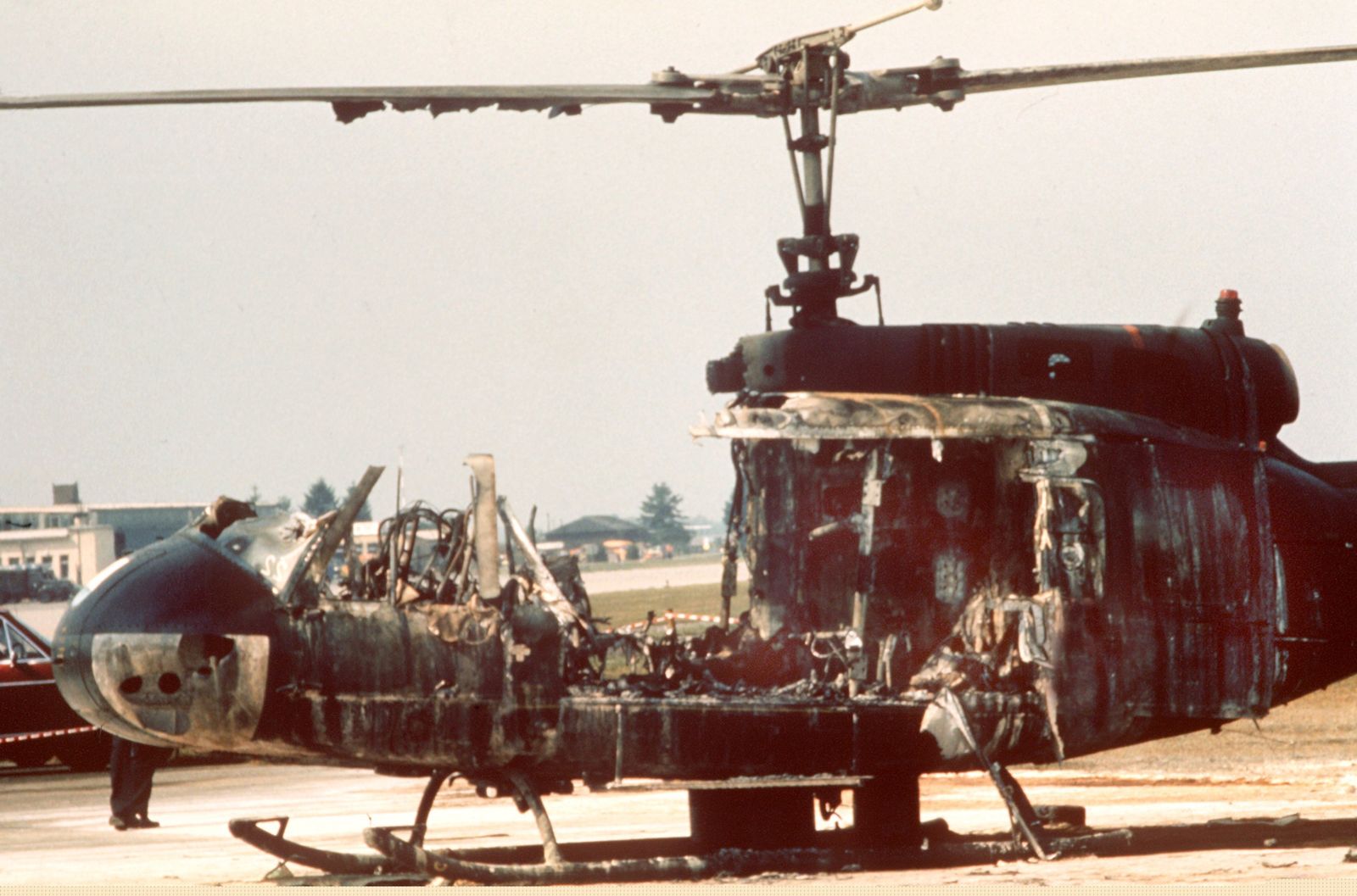 A burned-out helicopter after the deadly attack at the 1972 Munich Olympics.