The official blessing came from the very top. "Wind energy is a very important prospect for the future," Germany's President Horst Köhler said. Green energy, he added, is "in tune with nature."

The industry is in need of Köhler's encouraging words. For the last 10 years the German government and companies have been working on plans to build enormous offshore wind farms. And, yet, not a single blade currently turns off the coast of Germany. The reasons? Technical difficulties, a lack of money and problems with the power cables.

The breakthrough, though, could finally come this summer. In the North Sea, 45 kilometers north of the German island of Borkum, the first offshore wind farm in Germany -- called Alpha Ventus -- is finally taking shape. "Construction starts in August," Lutz Wiese, a spokesman for the project, told SPIEGEL ONLINE. Every single wind turbine will weigh 1,000 tons -- and rise nearly as high as the Cologne Cathedral (see graphic).

The firms behind the project are German energy companies E.ON and EWE along with Swedish power company Vattenfall. It's an odd collection -- the trio of companies are hardly known for their interest in green energy, operating mainly coal and nuclear power plants. That, though, looks to be changing. The companies' top executives are hoping to develop a multi-billion euro business in renewable energies.

The official line is that Alpha Ventus is intended merely as a research project with no current plans to turn it into a commercial operation. The project isn't especially big either: Only 12 wind turbines will be erected, with a combined capacity of 60 megawatts -- enough to provide power to 60,000 homes during a good breeze.

Nevertheless, Alpha Ventus could be the beginning of a German electricity revolution. Experts predict that the new wind park will be just the first of many in the North Sea and Baltic Sea off the coast of northern Germany.

By 2020, 10,000 megawatts-worth of offshore wind turbines -- the output of 10 nuclear power plants -- will be connected to the grid, according to the German government. As a result, the share of renewable energies in the German electricity mix will shoot up from 12 percent to 20 percent. No other energy source has such growth potential. In addition to helping reduce the emissions of greenhouse gases in Germany, such an increase in wind power would also make Germany less dependent on foreign energy sources.

The Federal Office of Maritime Navigation and Hydrography has already opened up 20 areas in the North and Baltic Seas for the construction of wind turbines. Most of the projects are still in the planning phase, but some are more advanced:

What has sparked this boom is Germany's Renewable Energy Law (EEG) -- or more precisely, the changes Germany's parliament's made to it in early June. The EEG sets fixed rates which have to be paid for renewable energy. Until now, the rate was 9 cents per kilowatt hour for electricity coming from offshore wind parks. The change means that operators can now bank on 15 cents per kilowatt hour. "That has an impact," Ulf Gerder of the German WindEnergy Association says. 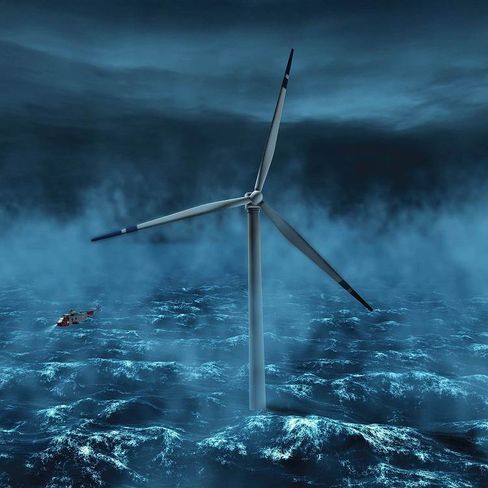 Offshore wind turbines are gigantic. Here, an artist's rendering of such a turbine, planned for the coast of Norway.

The first electricity from the flagship project Alpha Ventus is supposed to hit the grid in October. The 12 wind turbines are supplied by manufacturers Repower and Multibrid, and they will be erected in a lattice-like formation at a distance of 800 meters (a half mile) apart, meaning the wind farm will stretch over an area of four square kilometres (1.5 square miles) -- the size of 550 football fields.

The advantages of such an offshore wind farm are clear. The ones currently being planned in Germany won't be visible from land, so people are unlikely to complain about them. And, because of the strength and consistency of sea winds, wind turbines located off the coast generate more power.

On the other hand, the challenges are greater as well. The water at the site of the proposed Alpha Ventus wind turbines in the North Sea is 30 to 40 meters deep -- and the turbines have to be anchored in the seabed with steel posts. Spokesman Wiese talks about a "world premiere", as the existing offshore wind farms off Scotland and Denmark stand in much shallower water.

Such difficulties also up the price tag. Alpha Ventus is to cost €180 million ($282 million) to build -- nearly three times as much as a similar installation on land. The government is channelling €50 million ($78.7 million) into research. E.ON is footing the €40 million ($62.9 million) bill for the connection to the grid.

Such sums mean that offshore wind parks are likely to remain the province of established energy giants. To reach the government's targets, €20 billion to €30 billion will have to be spent on wind turbine construction in the North and Baltic Seas. Smaller wind farms funded by local investment groups -- a major part of the land-based windmill boom -- won't have a chance.

Maintenance promises to be expensive as well. Indeed, keeping offshore wind parks up and running makes up some 20 to 30 percent of total costs, according to industry estimates. Plus, the turbines have to be built to withstand gusts of 160 kilometers per hour and 15 meter high waves. On top of that there is the salty air -- the Danish manufacturer Vestas, for example, has found corrosion to be a major problem on its offshore turbines.

Taken together, it is unsurprising that offshore wind farms remain something of a rarity. At the moment wind turbines with a capacity of 100,000 megawatts are in operation around the world, of which a mere 1 percent are offshore. The rest are on land.

In Germany, environmental protection must also be factored in. As does the fact that new power lines would be needed to transport large quantities of offshore energy to major urban areas in the country's south and west. Indeed, the list of obstacles means that many view the government's goal as overly ambitious: To produce 10,000 megawatts in 2020 would -- using today's technology -- require 2,000 to 3,000 wind turbines. "We're building 12 such turbines," E.ON CEO Wulf Bernotat said, referring to Alpha Ventus. "Who is going to build the other 2,988?"

Fritz Vahrenholt, former head of wind power firm Repower, is also skeptical. In the coming five years, Germany will produce at most 4,000 megawatts, he said, "if we do our best."