Upon learning that her friends had died, Beate Zschäpe blew up her apartment in the city of Zwickau in the eastern state of Saxony. Then, she disappeared. At 8 a.m. the next morning, Zschäpe, suspected of being a member of a right-wing extremist terror cell, called the parents of Uwe Mundlos and the mother of Uwe Böhnhardt to inform them that their sons were dead.

The suspect's activities on the two days that followed remain uncertain. But on Monday of last week, Zschäpe appeared at a police station in Jena and told officers, "I am the one you are looking for." Sources have told SPIEGEL ONLINE that, prior to turning herself in, she had spent days wandering through Jena searching for an attorney. She is said to have been turned away from one law firm, which had instead pointed her in the direction of a criminal law expert who then took her on as a client. The first law firm, however, denies having had any contact with Zschäpe.

Zschäpe's Nov. 8 appearance at the Jena police station marked the end of more than a dozen years of living underground. But where did she and her apparent co-conspirators Mundlow and Böhnhardt spend those years after disappearing in 1998? There are numerous indications that the trio -- who are the prime suspects in the slayings of nine men in Germany of mostly Turkish origin as well as a policewoman -- had plenty of help. And that, while the trio may have used Zwickau as their base for many years, they had connections in several other parts of the country.

Several sources told SPIEGEL ONLINE that the three had been seen in Winzerla, a neighborhood in Jena, a small university city in the eastern state of Thuringia, between 2000 and 2002. The neighborhood is known to be a hotbed of right-wing radical activity, centering around a city-run youth club. It was a place where concerts were held and new members of the scene could be recruited.

At the time, the three were the subjects of active arrest warrants. The question is whether they had already moved to the neighboring state of Saxony at the time and were possibly just visiting their old hometown.

Some have their doubts. "It would have spread around quickly in Thuringen if they had," said one former friend of the three. Still, he said he would not rule out the possibility that they had been hiding with "other comrades" in other German states.

The source suspects that Holger G., who has been detained by police and is considered a possible fourth suspect in the terror cell, may have helped introduce the three into the neo-Nazi scene in the western German state of Lower Saxony. "He took care of them when they had to disappear from the police -- they had known him for most of their lives, and that was a bond that held them together," he said.

At the time Zschäpe, Mundlos and Böhnhardt disappeared into the underground, investigators already knew that they were close friends with Holger G. When Holger G. moved from Jena to Lower Saxony in 1999, investigators in Thuringia asked their colleagues in Lower Saxony to monitor the man. They suspected at the time that Holger G. might be trying to arrange a place for the three to stay outside of Germany. Accordingly, the authorities in Lower Saxony kept an eye on Holger G. and even reported back to the officials in Thuringia. But they simply added the information to his files without taking any action, and, three years later, they deleted the data.

Still, Holger G. was already on the radar of officials at Lower Saxony's Office for the Protection of the Constitution, the state-level branch of Germany's domestic intelligence agency, which is charged with monitoring possible right-wing extremist activity in the country. He had been spotted by officials at the wedding of one of the best-known members of the neo-Nazi scene in 1999, and that information was registered by domestic intelligence.

The Berlin daily Tagesspiegel reported Wednesday that the three prime suspects also maintained contacts with a leader of the right-wing extremist scene in the eastern state of Brandenburg. The man is said to be the twin brother of a leading neo-Nazi in Saxony who is believed to have helped the Zwickau cell produce the DVD in which they claim responsibility for the murders of nine people, including eight men of Turkish origin and a Greek man. The German Federal Prosecutor's Office, however, has refused to comment on the possibility of additional suspects.

According to the report in Tagesspiegel, the man from Saxony is believed to have planned frequent political actions together with his twin brother. The newspaper states that the Brandenburg-based extremist has close ties with the "Stützpunkt," or "support base," of the neo-Nazi group Young National Democrats (JN) in the state capital, Potsdam. The "support base" is dominated by neo-Nazis who have apparently fallen out with the German far-right National Democratic Party (NPD). Neither officials with the State Office of Criminal Investigation nor the state Interior Ministry would comment on the report.

So does that mean that the Zwickau cell had outside support? One observer of the right-wing scene in Saxony said that even homogenous groups like the Zwickau cell -- even if they cut themselves off from the outside world -- are still unable to completely shut off their social lives. He is convinced that Zschäpe, Mundlos and Böhnhardt lived in Zwickau since 2001, but that they also maintained their contacts with Holger G. in Lower Saxony and with other right-wing extremists.

The mass-circulation daily Bild reported Tuesday that Zschäpe even attended an NPD Christmas party as well as a demonstration in March 2004 in the town of Georgsmarienhütte, in Lower Saxony. A former friend of the three told the newspaper events of that nature were generally quite large, making it easier for individuals to blend in.

"The individual isn't as conspicuous," the friend said, "but, of course, they would have had to assume that one of their comrades might inform an official in Thuringia that they had been there." The right-wing extremist scene, after all, is filled with numerous informants who share information about the events with Germany's domestic intelligence agencies.

Zschäpe is reported to have told people that she was the founding member of the Zwickau cell, known as the National Socialist Underground (NSU), and that the group had 11 members, Bild reported. But a source who has since abandoned the right-wing extremist scene but met with Zschäpe several times, said that is unlikely. He says the three likely had a relatively normal social life but avoided bragging about radical acts within the scene.

Observers of the scene are keen to point out the particularly close ties the NPD maintains to potentially violent neo-Nazis in the eastern state of Saxony. Until 2000, the state was home to the Skinheads Sächsische Schweiz (SSS), named after a region in Germany, a group that was banned after a police raid uncovered explosives and guns. At the time, former SSS members linked up with other neo-Nazi comradeships in the area as well as NPD circles.

SPIEGEL ONLINE has learned that two NPD members in the state of Thuringia also maintained close ties to Thomas G. from the city of Altenburg, who shares the same last name as the suspect arrested on Sunday night. Like the three main murder suspects, he was also active in the group "Thüringer Heimaschutz," or Thuringia Homeland Protection, the same neo-Nazi group the three suspected terrorists belonged to during the 1990s, and he frequently visited Zwickau.

Togther with Thomas G. of Altenburg, Kapke and Wohlleben organized the ironically named "Fest der Völker," or "festival of peoples," a neo-Nazi event that has taken place in the past in the cities of Jena, Altenburg and Pössneck in Thuringia. He is also believed to have established the "Freies Netz" or "Free Network," a grouping of militant comeradeships in the eastern states of Thuringia, Saxony and Saxony-Anhalt. He is also reported to have built up the neo-Nazi scene in Zwickau by sending his friend Daniel P. from Altenburg to Saxony in order to recruit members.

Together with Daniel P., Thomas G. set up a joint apartment for fellow neo-Nazis in downtown Zwickau -- in the same part of town where suspect Zschäpe had lived since 2001. But Thomas G. is said to have never lived there himself. Further actions were said to have been planned there. Meanwhile, in a house located on the same street, the NPD opened up a local branch office for Peter Klose, who served as a member of the Saxony state parliament with the party from 2006 to 2009 and also as the NPD head in Zwickau.

Klose said he wouldn't rule out the possibility that the members of the terror cell also took part in NPD party events. "It may well be that I crossed paths with them at events or major demonstrations," said Klose, a man who is alleged to have close ties to the militant scene and is infamous for hanging the black-white-red flag of the German Reich (which, in addition to the Nazi flag, was flown in Germany until the end of World War II) from his window on April 20, the anniversary of Adolf Hitler's birthday. In addition to hanging the flag this year, Klose also demonstratively quit the NPD that day and has since served on the Zwickau city council as an independent.

Until last week, Klose went by the name "Paul Panther" on Facebook, which is the German name for the "Pink Panther," and he used an image of the cartoon character for his profile photo. The DVD produced by the Zwickau terror cell to document their murders also uses the cartoon character to summarize the killings that took place. Klose said he also could have chosen the German characters "Fix and Foxi" for his profile "because of the black-white-red border in the cartoons," just like the Reich flag, but that he just preferred the "Pink Panther" as an animated series.

He said there was no "deeper meaning" in the use of the character and that the fact that it had also been used in the video by the terrorists had merely been a coincidence. After seeing the video by the suspected terrorists on the Internet on Monday, he changed his Facebook profile, adding a photo of himself and using his real name.

An earlier version of this article cited a report in the Westdeutsche Allgemeine Zeitung newspaper stating that the former national chairman of the NPD, Thorsten Heise, visited a "fellowship evening" of the NPD together with Thuringia NPD members André Kapke and Ralf Wohlleben and the suspected terrorists Zschäpe, Mundlos and Böhnhardt. In one instance they were also reportedly stopped together with Uwe Mundlos in a car by police, the article cited Thuringen state security sources as saying. The police then let all of them go.

SPIEGEL ONLINE has retracted the published statements because they are no longer considered to be accurate. 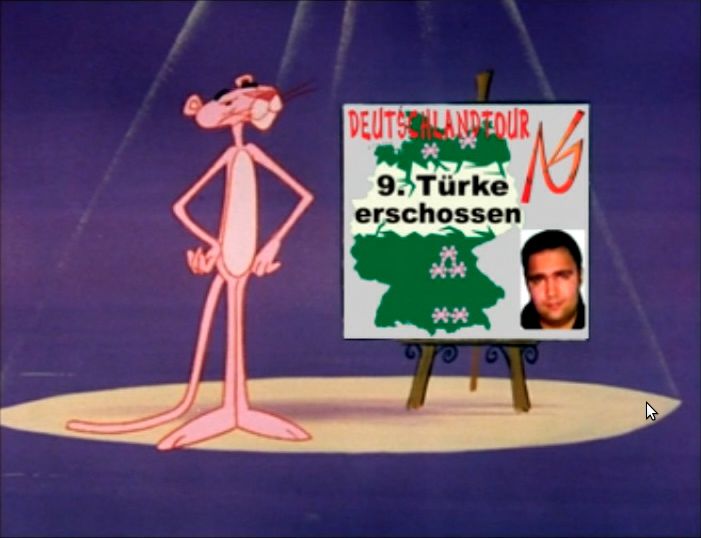 A still from the DVD video made by the Zwickau-based neo-Nazi terror cell.