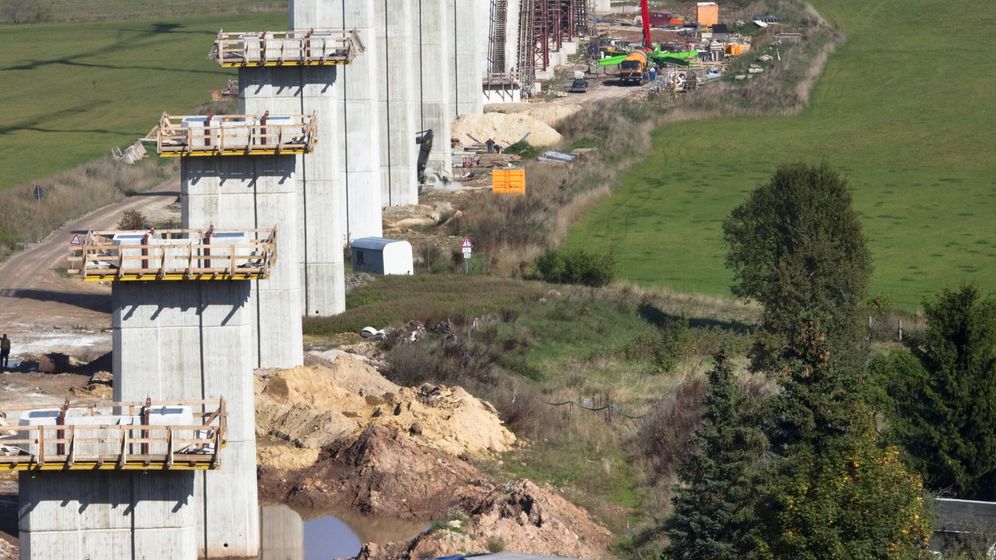 The event last Wednesday was supposed to be a nice, pleasant occasion -- the sort of thing that the two speakers, Deutsche Bahn CEO Rüdiger Grube and Transportation Minister Peter Ramsauer, haven't had much of lately. They were in Berlin to select Germany's most attractive train station at a photography exhibition in the city's main train station.

The winners were Baden-Baden and Darmstadt, both in southwestern Germany. "As a rule, our train stations are clean and orderly," Ramsauer said. During his trips, the minister personally sees to it that everything is as pleasant as possible for passengers -- that the wastebaskets are emptied, the platforms swept, the underpasses well lit and the employees friendly.

And what about Stuttgart, asks someone? What about its central train station, a building on the historical registry, which many consider Germany's most attractive station?

There are currently ongoing protests in the city over a massive construction project called "Stuttgart 21" which will see the station redesigned and railway lines placed underground. It will also involve demolishing the north wing of the station, which is already being torn down despite attempts by local residents to save it. The project also involves the construction of a new high-speed line connecting Stuttgart to the city of Ulm, which will cut travel times between the two cities nearly in half, to only 28 minutes.

Even before demolition, the building was "too unattractive on the outside and too conservative on the inside," said Dirk Flege, who organized the contest with his lobbying group, the Pro-Rail Alliance. Grube and Ramsauer smiled thinly.

The massive and costly project has become a stress test, both for the German national rail company Deutsche Bahn and German transportation policy. If Stuttgart 21 fails, the entire strategy for the German rail network will have been damaged.

It is a strategy that emphasizes high-speed routes, no matter what the cost. It is constructed around European transportation axes like the routes from London to Warsaw and Copenhagen to Marseilles and, in the process, has allowed rail connections in less densely populated areas to atrophy. It is also a policy in which, for a long time, money was no object.

Ever since Deutsche Bahn was founded in 1994 as a result of a merger between the former East and West German railway companies, it has been improving its rail network to comply with the political objective of increasing rail traffic. The national railway has already received €60 billion ($76 billion) in taxpayer money to fund the effort, spending more than a third of the money on new high-speed routes like the Cologne-Frankfurt and Nuremberg-Munich lines.

Nevertheless, the political target was not met. From 1994 to 2009, the number of passengers on national routes declined by 16 million to 123 million. Although there was an increase in freight traffic, it was insignificant. Only suburban and local traffic increased, thanks to hefty subsidies. And despite billions in federal money, the rail network became less and less comprehensive. Deutsche Bahn has closed a total of 7,579 kilometers (4,707 miles) of rail lines since 1994.

Does this mean that the goals of railway reform have failed? Should Deutsche Bahn renovate its low-density routes instead of sinking billions into the region between Stuttgart and Ulm?

The transportation committee of the German parliament, the Bundestag, met on June 9. Other parties attending the meeting were the national railway's major customers and competitors, representatives of local transport associations, private and freight railway companies, all of them organized within Deutsche Bahn's so-called network advisory council. These are the people who are most familiar with the strengths and weaknesses of the railway network.

The advisory council estimates the total cost of new and expanded routes that are under construction or approved to be €37 billion. This figure was included in the presentation material that LNVG head Hans-Joachim Menn distributed at the meeting.

If the federal government continues to provide about €1 billion a year in funding for these projects, the last of the projects will be paid for in 2043 -- a scenario that the experts consider to be unacceptable.

The advisory council has therefore made its position clear: There needs to be "a substantial reorientation" of government investments, it argues. The council believes that priority should be given to those projects that eliminate bottlenecks in the existing network and can be completed in a relatively short time. Menn and his colleagues are calling for politicians to take a reality check, instead of entertaining unaffordable visions for the middle of the century.

Anyone traveling between the cities of Hamburg and Dresden can experience the two sides of Germany's current rail network. The first stage, the 280-kilometer trip from Hamburg to Berlin, takes a little more than an hour and a half. Trains depart every hour and are usually on time. The high-speed ICE trains have priority on the route.

The trains traveling from Berlin to Dresden are Intercity trains (express trains which are not as fast as the ICE), but there is only one departure every two hours. The cars are often 30 to 40 years old and there are repeated "unscheduled stops" between stations. Construction or run-down tracks often force the Intercity trains to crawl along at speeds of only 30 kilometers per hour (about 19 mph). The 170-kilometer route from Berlin to Dresden takes two-and-a-quarter hours -- at least. Ten years ago, the trip took less than two hours.

Things are even worse when it comes to freight traffic. Many trains creep through the country at an average speed of 50 kilometers per hour, so that the trip from the Lower Rhine region near the Dutch border to Heilbronn in the southwest can take up to nine hours. This comes as no surprise, given that the last significant investments in a freight traffic route were made 30 years ago.

No one knows how the federal government and the Deutsche Bahn expect to increase rail freight traffic under these circumstances. According to a report by the Federal Environment Agency, it would cost €11 billion to upgrade the rail network to allow for a substantial increase in goods transported by rail. But this kind of money isn't in the transport minister's budget, unless he bids farewell to projects like "Stuttgart 21" and planned high-speed routes like Stuttgart-Ulm.

New questions are now being raised about precisely this project. As recently as July, the costs of the route were estimated at €2.9 billion, while the federal government originally expected it to cost about €2 billion. An expert report on the issue, which was commissioned by the Green Party and carried out by the Munich transportation consulting firm Vieregg & Rössler, was unveiled on Wednesday. It concluded that the new Stuttgart-Ulm route will cost at least €5.3 billion -- more than twice the original estimate. "Stuttgart 21 and the new Stuttgart-Ulm route threaten to become a bottomless pit," said the Green Party's Winfried Hermann, chairman of the Bundestag's transportation committee. "In normal life you would call that deception."

Railroad expert Karl-Dieter Bodack arrives at similar results when he compares the Stuttgart-Ulm project with the Nürnberg-Ingolstadt route completed in 2006, where a large number of tunnels drove up costs. He expects the same issues to apply to the Stuttgart-Ulm route, which passes through the hills of the Swabian Alps. He estimates the total cost at €5.2 billion.

If these estimates are correct, the federal government can expect to face considerable costs down the road. Ramsauer's predecessor Wolfgang Tiefensee, a member of the center-left Social Democrats, had pledged, on the basis of the original cost estimate, that the federal government would assume all cost increases over and above its share of €925 million.

Experts at the Transport Ministry are also increasingly skeptical. For months, ministry officials have been developing cost-benefit analyses for all new construction and expansion projects. They had planned to release a new list in early September, but that is now unlikely to happen until at least the end of the year.

However, the reassessment is already available for Stuttgart-Ulm, the most controversial route. Until now, it was relatively high up on the ministry's priority list, on which it was categorized as a level two or three project ("high priority").

Now the officials have downgraded the route, mainly because of its lack of suitability for freight trains. It is now a category one project ("moderate priority"), which, according to the administration's criteria, puts it in the same group as projects that are barely considered economically justifiable.

For Anton Hofreiter, the transportation policy spokesman for the Green Party's parliamentary group, Ramsauer's list is hardly worth the paper it's printed on. "They know perfectly well that it'll never be possible to pay for these projects," he says, accusing the ministry of "organized irresponsibility."

Sticking to Their Vision

The minister and the head of Deutsche Bahn, on the other hand, say this is nothing but fearmongering. And at their appearance in Berlin last Wednesday, they weren't about to allow anyone to spoil their good spirits.

Once again, Grube touted his vision of a European high-speed rail network. "The new route is indispensable for a fast connection from Paris to Bratislava," he said.

Ramsauer also believes that everything is on track. "I can't imagine that a project like this will be cancelled at this point," he said -- as he fidgeted nervously with his hands.