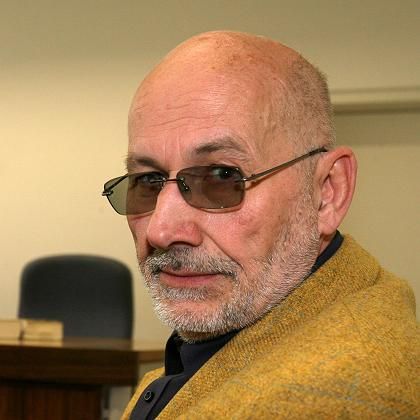 Back in the slammer.

A regional court in Erding, outside of Munich, found that Horst Mahler had broken the law when he greeted journalist Michel Friedman with the words, "Heil Hitler, Herr Friedman."

Friedman, who had previously served as the vice president of the Central Council of Jews in Germany, met Mahler in an airport hotel in October 2007 to speak with him for the German edition of Vanity Fair. A month later the magazine ran the conversation uncut, with a pre-emptive apology: "We're publishing this interview because we believe it to be an unparalleled exposé of German right-wing ideology -- even if (Mahler) says things that are illegal in Germany: (He) denies the Holocaust and uses a Hitler greeting."

Mahler defended himself during the trial, denied the Holocaust again in open court on Monday and was ordered out of the room by the judge -- who called him "utterly incorrigible."

Nazi symbols, praise of Hitler and denial of the Holocaust are "anti-constitutional" in Germany and therefore against the law. But breaking these laws is nothing new for Mahler. When he started a jail sentence for a similar crime in 2006, he gave a stiff-armed salute just outside the gate. He had just finished that sentence last August when he met Friedman in October.

A Trapeze-Swing to the Right

Both men have high profiles. Friedman is a 52-year-old TV personality who stepped down as vice president of the Central Council of Jews in 2003 after a scandal involding drugs and prostitutes. His parents were saved from Auschwitz by German businessman Oskar Schindler.

Mahler is a 72-year-old lawyer with who has a long history of offending German sensibilities. During the 1970s he co-founded the far-left Red Army Faction, as a communist radical opposed to West Germany's so-called "Fascist state." He spent 14 years in jail for his involvement in various RAF-related crimes. Later he swung to the far right, and for a while, after 2000, served as a lawyer for the neo-Nazi National Democratic Party of Germany (NPD).

Charges against Mahler include sedition, using gestures of an anti-constitutional organization and criminal insult. Holocaust denial in Germany falls under the crime of sedition, or Volksverhetzung, because it's regarded as an incitement against Jews as an ethnic group.

During the interview he said, among other things: "Hitler was the liberator of the German people. He is demonized as the liberator of Satan." His statements roused criticism nationwide, and a lawsuit was lodged against Vanity Fair last November by a Holocaust survivor for providing Mahler with a platform for his extremist views.