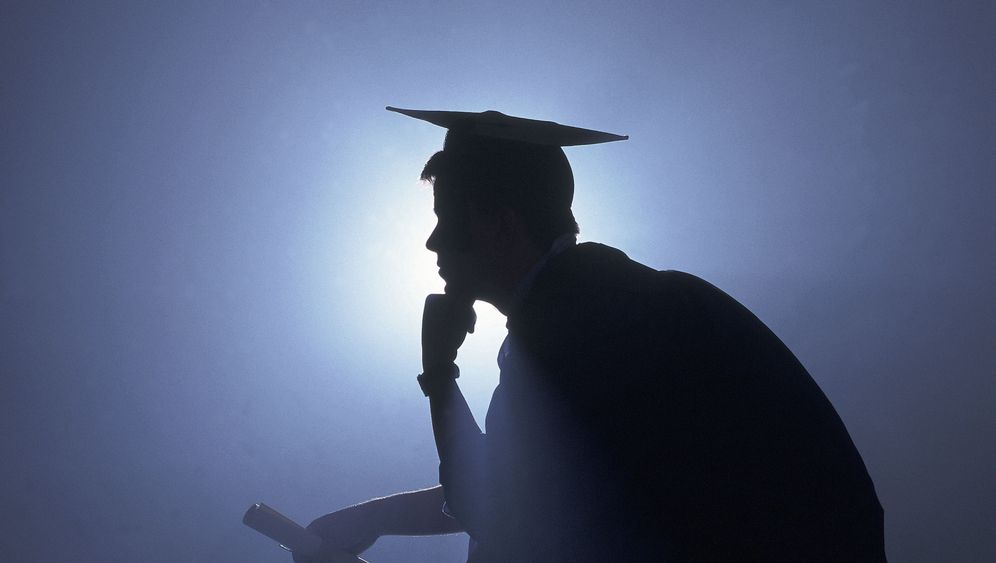 It was seen as an Internet sensation. Just two weeks after a law professor from the University of Bremen first went public with accusations that Karl-Theodor zu Guttenberg, Germany's defense minister at the time, had plagiarized portions of his doctoral thesis, Guttenberg was forced to resign from Chancellor Angela Merkel's cabinet in March.

During those 14 days, people from across Germany joined the hunt for suspicious passages, all of which were amassed on a Wiki which graphically displayed the growing indications of plagiarism. Guttenberg has since lost his Ph.D. title and completely withdrawn from public life.

But the plagiarism hunters are still hard at work. Ten to 20 of them have spent the last two weeks perusing the Ph.D. thesis of Silvana Koch-Mehrin, a senior member of the Free Democrats, Merkel's coalition partners in Berlin. Prior to that, they found numerous sections in the dissertation of Veronica Sass -- the lawyer daughter of former Bavarian Governor Edmund Stoiber -- that had apparently been copied.

The group, which calls itself VroniPlag, a reference to Sass' nickname, is constantly on the lookout for more suspicious academic papers to put under the microscope. The project is a spinoff from a similar platform, called GuttenPlag, which brought down Guttenberg.

"The goal is to guarantee the integrity of doctor titles in Germany," reads a note on the VroniPlag website. "The work performed here is neither politically motivated nor is it aimed at personal defamation or anything like it."

Who, though, are the people behind VroniPlag? Those interested in finding out must log into a chat on the website ( German only) or fill out an online contact form. Not long later, the telephone will ring: "This is VroniPlag," the voice on the other end of the line says. Most of those digging through the dissertations of prominent Germans want to remain anonymous. Group members often only know their colleagues by their chat names. But they also want publicity.

And they want to make a difference. The group has established contact with the University of Heidelberg, which awarded Koch-Mehrin her doctor title in 2000. They call the rector's office when they find new segments of the dissertation considered suspicious. A university spokesperson emphasized that the university is examining Koch-Mehrin's dissertation independently of VroniPlag and will meet at the end of the month and again in May to determine whether to request a statement from Koch-Mehrin, a member of the European Parliament.

VroniPlag, which includes Ph.D. holders and several professors, also keeps the media updated on its findings. In a report issued on Tuesday, the group indicated that they had found plagiarized segments on more than 25 percent of the pages in Koch-Mehrin's 201-page work. While many of the plagiarized parts of Guttenberg's dissertation were key analytical passages, most of those found in Koch-Mehrin's doctoral thesis comprises descriptive text from standard works. Koch-Mehrin has so far refused to comment on the accusations.

Many of the investigators at VroniPlag say maintaining anonymity is a way of keeping the focus of the debate on the subject matter. Some, though, say they fear that their activities could result in impediments to career advancement.

And they are sensitive to accusations that their work is politically motivated. All the authors of dissertations that have thus far been targeted by the cyber detectives -- including a Christian Democratic politician in Baden-Württemberg -- have been center-right politicians from southern Germany.

"We are looking desperately for a Social Democrat from northern Germany who has plagiarized," says Debora Weber-Wulff, only half joking. A professor at Berlin's Technical University, Weber-Wulff is one of the few people asssociated with VroniPlag who has chosen not to remain anonymous. "I am just a very small part of it," she says.

Almost a decade ago, she found that almost one-third of the papers turned in by her students had been at least partially plagiarized. Since then, she has made it her mission to uncover copycats in the academic world. She tests anti-plagiarism software and offers seminars to train other professors on how to find falsifications and plagiarized paper segments.

Weber-Wulff considers the work of her anonymous colleagues to be reputable and legitimate. Each suspect section must be verified by two other VroniPlag members, working independently of each other. Discussions over each segment are posted on the website.

Stefan Weber, who graduated in media studies from the University of Salzburg and is widely known as a plagiarism investigator, also praises the work of VroniPlag. "The anonymous, unpaid work of the net community will reveal a number of cases," he told the German public radio station Deutschlandfunk recently. "That is outstanding."

The group chooses its targets with the help of people who write in to the site proposing a dissertation for examination. If there are grounds for suspicion, VroniPlag sets to work, digging through page after page of works which are, as a rule, not exactly page turners. 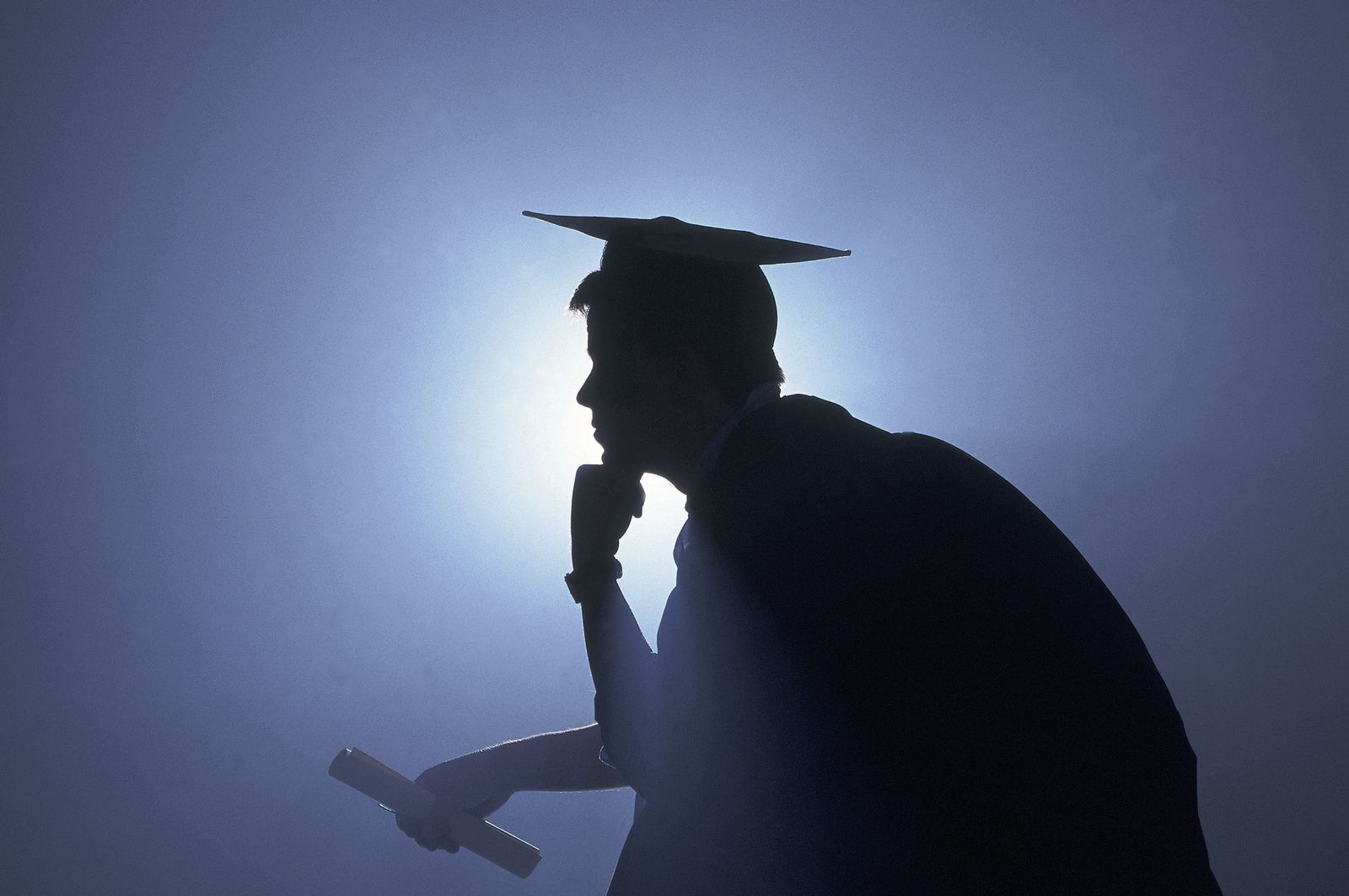 A group of online activists in Germany has begun targeting academic plagiarism, taking a look particularly at the Ph.D. dissertations of politicians in the country. They are under no illusions that they will be able to repeat their coup earlier this year when their research helped bring down Defense Minister Karl-Theodor zu Guttenberg. 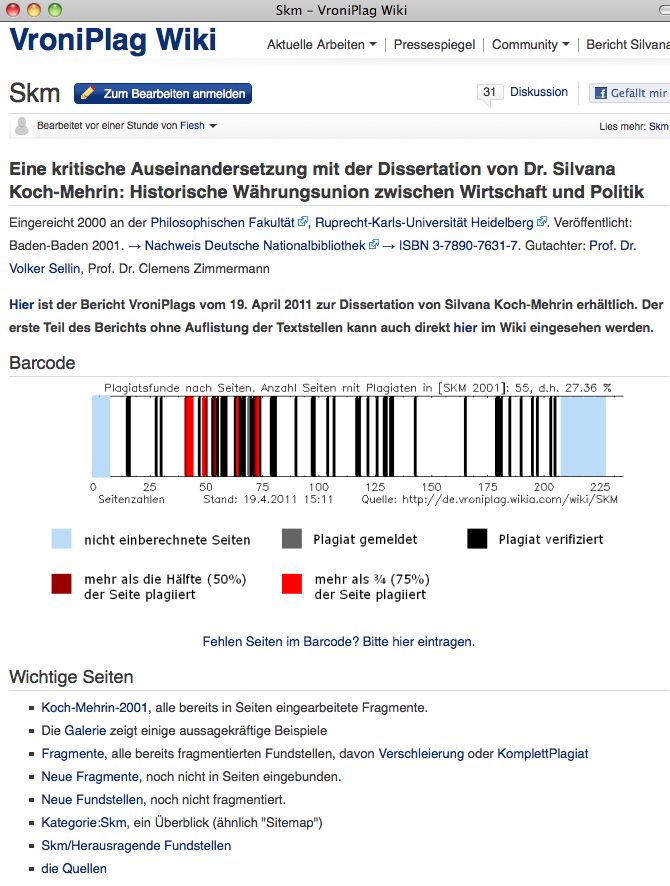 The Wiki VroniPlag displays the results of its research as a bar code. Red indicates pages on which three-quarters of the text has been plagiarized. Black shows verified instances of plagiarism. The darker red indicates that more than half of the page indicated has been plagiarized. Gray is for pages where someone has reported plagiarism but it has yet to be checked.