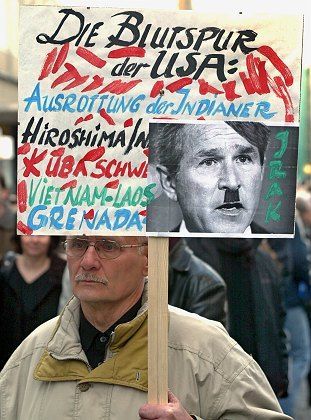 A German man carries a banner with a picture of Bush as Hitler during a 2003 demonstration against the Iraq war in Leipzig. Bush-bashing is something of a national sport in Germany.

Now they believe that the United States is a greater threat to world peace than Iran. This was the by-no-means-surprising result of a Forsa opinion poll commissioned by Stern magazine. Young Germans in particular -- 57 percent of 18-to-29-year-olds, to be precise -- said they considered the United States more dangerous than the religious regime in Iran.

The German political establishment, which will no doubt loudly lament the result of the poll, is largely responsible for this wave of anti-Americanism. For years the country's foreign ministers fed the Germans the fairy tale of what they called a "critical dialogue" between Europe and Iran. It went something like this: If we are nice to the ayatollahs, cuddle up to them a bit and occasionally wag our fingers at them when they've been naughty, they'll stop condemning their women to death for "unchaste behavior" and they'll stop building the atom bomb.

That plan failed at some point -- an outcome, incidentally, that Washington had long anticipated. Iran continues to work away unhindered on its nuclear program, and President Mahmoud Ahmadinejad reacts to UN demands with an ostentatious show of ignorance. The UN gets upset and drafts a resolution.

Another item on the Iranian president's wish list is the annihilation of Israel. But that will take a bit longer. In the meantime, just to make sure it doesn't get out of practice, the regime had 15 British soldiers kidnapped a few days ago. But it's still all the Americans' fault -- that much is obvious.

We've known just what they're like for a long time. The 19th-century German author Karl May taught us about the American Wild West, and Karl Marx warned us about unbridled capitalism. Besides, we've all been there at least once -- on vacation, of course. Be it in California or Florida (that's where you get the best deals on rental cars, you know), we can see right through the Americans.

For us Germans, the Americans are either too fat or too obsessed with exercise, too prudish or too pornographic, too religious or too nihilistic. In terms of history and foreign policy, the Americans have either been too isolationist or too imperialistic. They simply go ahead and invade foreign countries (something we Germans, of course, would never do) and then abandon them, the way they did in Vietnam and will soon do in Iraq.

Worst of all, the Americans won the war in 1945. (Well, with German help, of course -- from Einstein and his ilk.) There are some Germans who will never forgive the Americans for VE Day, when they defeated Hitler. After all, Nazism was just an accident, whereas Americans are inherently evil. Just look at President Bush, the man who, as some of SPIEGEL ONLINE's readers steadfastly believe, "is worse than Hitler." Now that gives us a chance to kill two birds with one stone. If Bush is the new Hitler, then we Germans have finally unloaded the Führer on to someone else. In fact, we won't even have to posthumously revoke his German citizenship, as politicians in Lower Saxony recently proposed. No one can hold a candle to our talent for symbolism!

Anti-Americanism is the wonder drug of German politics. If no one believes what you're saying, take a swing at the Yanks and you'll be shooting your way back up to the top of the opinion polls in no time. And on the practical side, you can be the head of the Social Democratic Party and endear yourself to the party's hardcore with a load of anti-American nonsense, and still get invited back to Washington -- just look at Gerhard Schröder. In fact, you could, like leading German politicians in the debate over the planned American missile shield in Europe, be accused of having "an almost unbelievable lack of knowledge" by a former NATO general, and even that wouldn't matter. It's all about what you believe, not what you know.

Anti-Americanism is hypocrisy at its finest. You can spend your evening catching the latest episode of "24" and then complain about Guantanamo the next morning. You can claim that the Americans have themselves to blame for terrorism, while at the same time calling for tougher restrictions on Muslim immigration to Germany. You can call the American president a mass murderer and book a flight to New York the next day. You can lament the average American's supposed lack of culture and savvy and meanwhile send off for the documents for the Green Card lottery.

Not a day passes in Germany when someone isn't making the wildest claims, hurling the vilest insults or spreading the most outlandish conspiracy theories about the United States. But there's no risk involved and it all serves mainly to boost the German feeling of self-righteousness.

Iran is a different story. The last time someone made a joke on German TV about an Iranian leader, the outcome was not pleasant. Exactly 20 years ago, Dutch entertainer Rudi Carell produced a short TV sketch portraying Ayatollah Khomeini dressed in women's underwear. Carell received death threats. The piece, which lasted all of a few seconds, led to flights being cancelled and German diplomats being expelled from Tehran. Carell apologized. Jokes about fat Americans are just safer.

Daniel Jonah Goldhagen, the American historian who in his 1996 book "Hitler's Willing Executioners" deprived the Germans of the belief that they didn't know what was going on back in the day, is currently studying the history of genocides in the 20th century. One of the things he has noticed is that the politicians or military leaders who planned genocides and had them carried out rarely concealed their intentions in advance. Whether the victims were Hereros, Armenians, kulaks, Jews or later Bosnians, the perpetrators generally believed that they were justified and had no reason to hide their murderous intentions.

Today, when Iranian President Mahmoud Ahmadinejad talks about a world without Israel while dreaming of an atom bomb, it seems obvious that we -- as Germans of all people -- should be putting two and two together. Why shouldn't Ahmadinejad mean what he says? But we Germans only know what we believe.

The Americans are more dangerous than the ayatollahs? Perhaps the Americans should take the Germans at their word for a change. It's high time for a new round of re-education. The last one obviously didn't do the job.