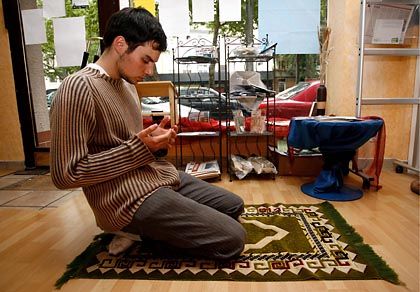 German converts to Islam make a valuable contribution to dialogue between Muslims and non-Muslims.

Recently the German press has been filled with stories about how German Muslims are a hidden threat to German society. As an anthropologist who has conducted a year-long ethnographic research project among German Muslims, I observed a very different picture.

Rather than being a theat, ethnic German converts to Islam are in fact a very valuable asset to Germany. They serve as a bridge between immigrant Muslims and non-Muslim Germany, and by doing so they help to create a well-integrated German society.

And just as it would be wrong to assume that all leftists in Germany could potentially be supporters or even members of violent organizations like the left-wing RAF terror group, it would be a mistake to associate tens of thousands of peaceful and law-abiding converts to Islam with the two converts who were caught planning massive attacks last week.

During my research, I met dozens of Germans who had embraced Islam. With some of them I conducted formal interviews about how Islam came to their lives and what had been transformed in their lives as a result. With others I had the opportunity to develop closer ties and get to know them better as people over the course of a year.

One of the most significant observations that came out of my study is that ethnically German Muslims do a tremendous job of bridging the gap between practicing Muslims who have an immigrant background and the (post-) Christian German society. Historically, because many of the Muslims who immigrated to Germany were not well-educated, German converts to Islam have played an active role in mediating between the Muslim community and German officials and the media.

Today, many German converts who are too humble to take leadership roles are contributing to the lives of immigrant Muslims by teaching German classes in mosques; increasing their accessibility to legal institutions by bringing in police officers to give classes to Muslim communities; working as teachers in pre-schools attended by immigrant students; and taking up the duty of writing reader letters to newspapers when they notice discriminatory treatment of Muslims or Islam.

One often finds it is converts to Islam who are at the forefront of efforts to establish dialogue between Christians and Muslims. When schools or other groups approach mosques asking for a brief lecture on the subject of Islam, they will often find a German Muslim who volunteers their time for this (sometimes demanding) task. Most converts I met are willing to do this kind of work because they find it personally and politically important to keep channels of communication open between Muslims and non-Muslims.

Probably the most important contribution of German converts to Muslim life in Germany is their demand for German-language services and lectures in mosques. Today, to my knowledge, only seven of over 90 mosques or praying rooms in Berlin rely mainly on the German language. In these mosques, German converts to Islam are very active.

When Islamic leaders give lectures in German, German converts ask endless questions to find what is only a "tradition" and what is "essentially" Islamic. These efforts help German converts to adapt Islamic practices to make them suitable to their lifestyles in contemporary Germany.

Most practicing Muslims do not like the phrase "German Islam" because they promote the understanding that there is only one Islam. Yet, if German Islam means embracing this religion in a way that fits German culture and daily life, converts to Islam are at the forefront of creating this formula.

For example, German Muslim women design modest clothes that are not showy, and hence fit the taste of German converts rather than reflecting the latest Islamic fashions from the Muslim world. Or German converts who grew up with dogs as pets say they embrace (respected Islamic scholar) Imam Maliks legal approach to dogs, in which he claims contact with dogs does not make the religious ablution for prayer invalid -- a tiny detail, to be sure, but one that demonstrates how converts find ways to accommodate German culture in their Islamic practices.

Another major contribution of German-speaking mosques facilitated by German Muslims is that they bring Muslims from different cultures together. In Berlin, only in the German-Speaking Muslims Group (DMK) in the district of Wedding, or at youth-group gatherings at the organization Muslim Youth in Germany (MJD) in Kreuzberg, can one meet mixed groups of close friends consisting, say, of Turks, Germans, Lebanese, Ethiopians and Latvians. And only in these mosques is it normal to find mixed Arab-Turk or Pakistani-German couples and children representing diverse cultures playing with each other in German.

German converts to Islam bring their own cultural practices to these mosques. In the DMK, all representatives of the mosque administration are democratically elected. Women play a very active role in making decisions, giving speeches, and questioning some patriarchal practices by finding counter proofs from the Koran and sayings of the Prophet. In their monthly picnics, women play badminton and volleyball as men play chess.

The Weimar Institute in Potsdam, which mostly consists of converts to Islam, follows a progressive method for the education of the community's pre-school children with the intention of developing their creativity and independence. Following Sunday gatherings, they serve organic food in the backyard of the beautiful house of prayer. Like many other left-wing Berliners, members of this community believe in the importance of sharing resources and resisting capitalism.

Apart from their contributions to the life of Muslim communities, German converts are living proof that Germany is moving towards being a well-integrated society. In Germany, many politicians talk about non-integrated immigrants. Needless to say, integration is inevitably a two-way street. When two parties have true contact, both of them will find themselves transformed in the process.

Through my stay in Germany, I met many Turks, Kurds, Arabs and Iranians who have very similar religious dispositions to non-immigrant Berliners. They are atheist or agnostic, do not think about God in their daily life, but nevertheless buy a tree at Christmas, especially if they have children. They speak to their children in German and give them German-sounding names so that they are not discriminated against in their future lives. I also met a small number of ex-Muslim immigrants who had converted to Christianity.

It is only normal that as a result of contact with Muslims, some Germans choose to embrace Islam. I take conversion to Islam to be a sign of integration in German society, particularly because all the Germans I met had converted as a result of genuine social contact with Muslims. The initial step toward conversion can take many forms: In some cases it is a romantic relationship, in others curiosity about a best friends religion in high school, admiration of the strong ties among members of a family with an immigrant background, or friends made during a vacation to a Muslim-majority country.

If the current government is serious about promoting integration in German society and wanting Muslims to feel like they are both Muslim and German, as Chancellor Angela Merkel said at the opening of the Islam Conference in Berlin in autumn 2006, it should recognize the valuable role German converts to Islam play in this society.