Something strange is happening in the land of boredom. Until last Friday, German politics seemed neat and orderly. The next "grand coalition" (or GroKo) was to be formed -- with familiar faces, modest projects, no surprises. The planned third edition of the pact between the conservative Christian Democrats and the center-left Social Democrats (SPD) under Angela Merkel's chancellorship didn't promise Germany, Europe and the rest of the world much, but at least it seemed to guarantee stability.

But that may be about to change. The SPD has forced out its chairman, Martin Schulz, who had just finished coalition negotiations quite successfully from his party's point of view. He also abandoned his aspirations to become the next foreign minister.

To be sure, the coalition agreement still needs to be confirmed by a vote of the SPD party base in the coming weeks. Schulz was to be the one to convince a doubtful party base. Whether the agreement will pass the test, is now a wide-open question. If that vote fails, it could trigger an explosive chain reaction.

Germany, which in recent years seemed like Rock of Gibraltar in a sea of global uncertainty, suddenly looks rather shaky.

It's conceivable that we are close to a meltdown of Germany's party system -- with far-reaching consequences. This notion is by no means exaggerated. What has been possible elsewhere, could also happen in Germany.

In France, the centrist Emmanuel Macron and the hard-leftist Jean-Luc Mélanchon have revolutionized politics by creating new movements that have brushed aside traditional parties. In the United Kingdom, the ruling Conservatives are falling apart, while the Labour Party has morphed into a truly Socialist Party under Jeremy Corbyn's leadership. In Italy, with elections due in early March, the left-wing populist Five Stars Movement is leading in the polls; even the grandmaster of Euro-populism, Silvio Berlusconi, is back in politics.

For decades, Western democracies were pretty stable affairs. But now politics has become fluid -- and often erratic. Why should Germany be immune to this trend?

Global financial markets are already hypersensitive, with investors fearing that central banks will act on growing inflation concerns. Expectations of interest rate hikes have led asset prices to tumble at a time when the global upswing is only just beginning to take hold in the real economy. A prolonged political crisis in Germany, with all its possible side-effects on the eurozone, threatens to bring additional uncertainty to the markets.

Fundamental structural change is disrupting political systems everywhere. Firm party structures are no longer needed to be successful in politics; new movements can be organized quickly via social media like Facebook or Twitter. Ties to traditional sectors of society and organizations, e.g. churches or trade unions, have loosened. Barriers to entry into political markets have been lowered considerably, to the extent that activists and political startups have gained leverage.

This new political framework has the potential to induce dramatic changes. We live in times of turbo democracy, a system that although highly agile is also prone to the kind of crises seen in turbo capitalism.

Few anticipated the outcome of the Brexit referendum. Few considered Donald Trump's election possible. Today, few believe that Italian voters could opt for a parliamentary majority that strives to exit the euro. And few expect Germany's party landscape to be transformed by major tectonic shifts, even though that's not such a far-fetched scenario.

Stop TTIP, No GroKo, No Euro?

At the SPD party congress in January, only a narrow majority of delegates voted in favor of starting formal coalition talks with Merkel's party. Now that the coalition treaty is completed, a vociferous "NoGroKo" opposition within the SPD is mobilizing against the party leadership, while leading figures, who are supposed to win over a skeptical party membership, are fighting each other in public. Under these circumstances, it would come as little surprise if the party referendum was lost. The results are due in early March.

Such an outcome would spell trouble not only for SPD leaders, but also for the leadership of Angela Merkel's CDU and its Bavarian sister party, the Christian Social Union (CSU). Half a year after the election and endless negotiations with potential partners, Merkel would still lack a majority in parliament. This would add to the pressures she already faces from within her party for caving in on too many issues. If, in the end, she can't even deliver the next stable government, her reputation as an effective political manager would be severely damaged.

Merkel has all but ruled out creating a minority government under her leadership. But if another election were held this year, new movements transcending traditional parties could stand to profit from the current vacuum. Sahra Wagenknecht and Oskar Lafontaine, leading figures of the far-left Left Party, have already toyed with the idea of creating a leftist movement that could appeal to disenchanted SPD voters as well as alienated left-wing Greens after the party's recent appointment of an all-centrist leadership. It might even lure some protest voters away from the right-wing populist Alternative for Germany (AfD).

With the far-right gaining ground in the polls, it's conceivable that another election could yield a situation in which the parties that have run the country for decades could no longer continue to do so. Under these circumstance, it is entirely unclear what a future government would look like and what agenda it might pursue. For Germany, once the land of reassuring boredom, that would be a downgrade. Europe's strong center might become the Continent's hollow middle.

I do not consider this scenario desirable. Unfortunately, though, it is far from outlandish.

Democracies no longer work the way they used to. Power has shifted from backrooms filled with party officials to a hyperactive public sphere prone to mood swings. Political parties also no longer have the same kind of hold on individual political issues that they once did. Even if another GroKo can be formed, it must prepare for issue-specific protest movements. It's worthwhile remembering that the last grand coalition was confronted with an anti-TTIP campaign that killed the trans-Atlantic free trade agreement long before protectionist Trump even got elected. It would come as little surprise if the next government faced a massive anti-euro movement.

The GroKo parties have agreed to strive for more integration, both at the EU and at the eurozone level, a stance that is rather unpopular in Germany and that neither the Christian Democrats nor the Social Democrats have campaigned for. I agree that a more federalist Europe is needed to put the common currency on a stable footing. Given, however, that few have bothered to even try to persuade voters of the necessity of these moves, the ground is fertile for a counter-movement that has the potential to muster support from large swaths of the political spectrum, from staunch conservatives all the way into the middle class.

These days, public debates tend to be loud, aggressive and pointed. At the same time, political issues have become more and more complex thanks to globalization, Europeanization and digitization. That's why many voters are forming their opinions on the basis of thin knowledge. Balanced, rational decision-making hardly seems possible on such a narrow information base. Instead, citizens delegate the difficult details to leaders in whom they trust. Mr. Macron shook up French politics in this way.

But these ties may not be long lasting. Moods can swing rapidly, as Martin Schulz has experienced during his political rollercoaster ride during the past 12 months. Because voters who behave like fans, also might eventually grow bored with their stars, thus adding to political instability.

Then there's another factor. In a media that is increasingly placing a greater emphasis on entertainment value than debating real issues, serious politics is becoming boring for a lot of people. Citizens who follow popular political figures the way fans do rather than being driven by political convictions of their own may be more likely to turn to the next act swiftly, irrespective of performance in office. Simply because, at some point, there's gotta be something new.

It would be a tragedy if politics were to turn into some kind of "Germany's Next Top Chancellor" spectacle. As I mentioned before, I do not consider this scenario desirable. But it appears that boring politics could quickly get frighteningly exciting.

This article has also been published in German.

Henrik Müller is a professor of economic policy journalism at TU Dortmund University. 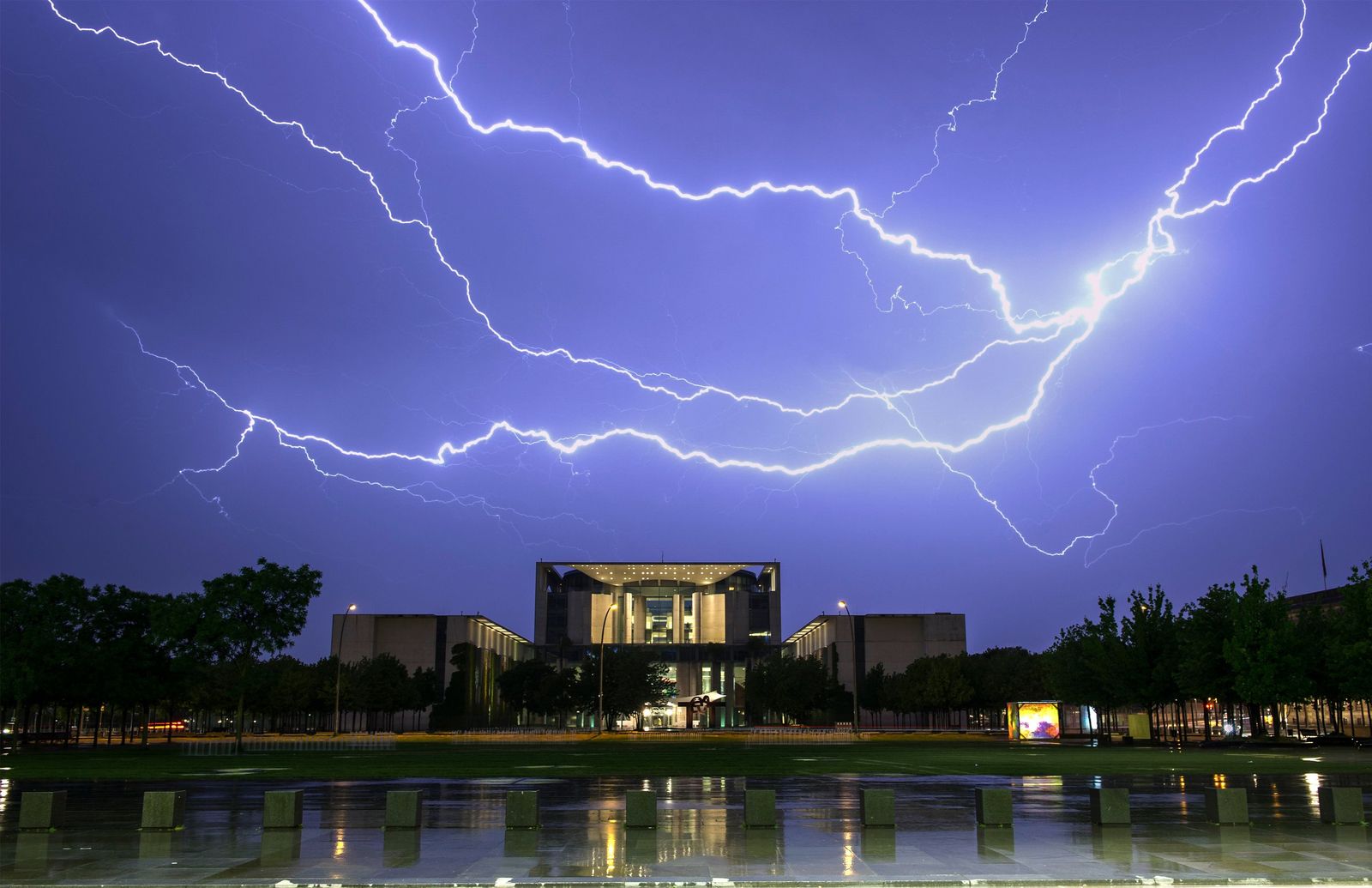 The German Chancellery in Berlin