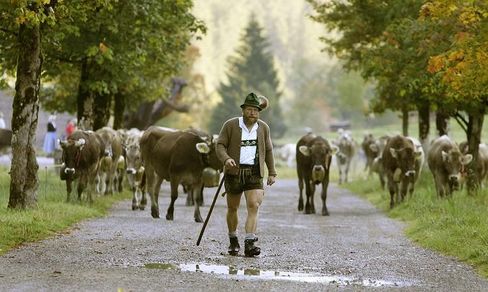 A Bavarian farmer walks with his cows south of Munich.

"Germany is not a country of immigration," Roland Koch said this month as he sought to revive his campaign for a third term as governor of the western state of Hesse by calling for a crackdown on "criminal young foreigners."

The statement, borrowed from former Chancellor Helmut Kohl, is untrue. Some 15 million people, or just under a fifth of the German population, have an immigrant background. The real message is: We dont want Germany to be a country of immigration.

Foreigners -- theyre often called that here even if they and their parents were born here -- get that message loud and clear in their everyday lives. That steely look of disapproval in shops when a customer expresses an enquiry in accented or broken German. The difficulty of finding an apartment to rent if your surname isnt Müller.

Just speaking English can get you into trouble on a Berlin S-Bahn train. A number of youths, presumably of far-right persuasion, glared at me during a recent ride through the east of the city. One muttered piece of shit, while another shouted nigger! before rushing out -- and Im white.

Id hate to be living here if I had brown or black skin. Statistics on racist assaults prove that parts of eastern Germany are no-go zones for ethnic minorities.

I recently interviewed an asylum seeker from Cameroon who was living in Potsdam, just west of Berlin. He said he was so used to people calling him "nigger" or making ape sounds at him that he no longer paid attention. The thing that really got to him, though, was being followed around shops or the local library by staff expecting him to steal something. Or seeing how guests in a cafe would remove their clothing from the coat stand he had just put his jacket on.

Koch knew exactly what he was doing when he followed up his call for tougher youth sentencing with a six-point list of values which included implied German virtues of punctuality and hard work as well as a guideline for immigrants: The slaughtering (of animals) in the kitchen or unusual ideas about waste disposal run counter to our principles."

Koch has evidently struck a chord with citizens in his state. At a campaign luncheon with a womens association in Frankfurt this week, several participants said they strongly supported his tough talk on foreigners. We let everyone in, they cause problems and we can't let them just do what they want, said one Frankfurt woman after Koch had held his speech.

Maybe its the Germans romantic yearning for purity and cleanliness, for a Heile Welt, a Perfect World, that renders them prone to a collective xenophobia. This nation of dog lovers goes for pure breeds -- walk around Berlins Grunewald Lake on a Sunday afternoon and you will see plenty of dachshunds, Alsatians and terriers. Dont even bother trying to spot a mongrel.

Try spotting an immigrant in a civil service job, in the police or in corporate management. Germany lags far behind Britain and the United States in integrating its immigrant population into the broadcast media, and a government minister in 2006 called on the networks to start recruiting more journalists and TV presenters from ethnic minorities.

Chancellor Angela Merkels steadfast backing for Kochs campaign shows how unintegrated immigrants are in this country. Their utter lack of political power makes it easy for Merkel to ignore them. Representatives of the countrys 3.2 million mostly Turkish Muslims have been crying out in vain for her to rein in what one immigrant group called this political arsonist."

They shouldnt have been surprised. After all, just a few months ago she told her conservative Christian Democrats that mosque minarets shouldnt be as high as church steeples.

Immigrant groups say the debate is threatening to divide the country. But it's already divided. "Multikulti," or multiculturalism, has become a dirty word. The debate over integration over the last decade has been shaped by conservative demands that immigrants adopt a German "Leitkultur," or "leading culture" -- a vague mix of Beethoven, sausages and Alpine cowbells, presumably.

It makes one wonder why Germany has never had race riots like the ones seen in Britain in the 1980s and France two years ago. Maybe the reason is that immigrants in Germany havent reached the stage of integration where they have serious political aspirations. That notion is hard to believe, though, given that the first wave of post-war immigrants, the Turkish and Italian "guest workers," helped build the countrys wealth.

"German society has more of a problem with homegrown intolerance than it does with foreign criminals," said Jens Jessen, the cultural editor of venerable German weekly newspaper Die Zeit, in a video blog this week.

This homegrown intolerance isnt the only obstacle to integration, though. Germany may have some of the worlds most desirable brands, but the country itself isnt the best brand to buy into.

The country, or at least the west of it, has done an impressive job of atoning for the crimes of the Nazis, but that history will continue to cloud Germanys national identity, and surely deters immigrants from rushing to embrace any kind of German-ness.

So instead of telling its immigrants not to slaughter sheep in their kitchens, Germany would be well advised to be nicer to its immigrants. Like it or not, theyre here to stay.

Editor's Note: SPIEGEL ONLINE International is currently collecting the experiences of foreigners living in Germany -- both good and bad. If you want to share your experiences or your opinions about the current immigration debate, send us an e-mail at spon_feedback@spiegel.de .