The nuclear catastrophe in Japan has sparked an international debate on nuclear energy -- one that is especially fierce in Germany. After Fukushima, it can no longer be viewed as an energy source for the future. German Chancellor Angela Merkel is bound to alter her pro-nuclear stance.

There are, of course, several arguments in favor of nuclear energy. In contrast to coal-fired power plants, atomic reactors produce little in the way of CO2 emissions -- which is good news for the climate. In addition, the technology is helpful for regions which may not have natural gas reserves, for example. Nuclear energy means a certain degree of independence and a modicum of political autonomy when it comes to determining energy policy. Furthermore, energy produced from nuclear power plants tends to be cheap, making it popular with consumers.

A False Sense of Security

But none of that counts -- at least not anymore. After the earthquake and tsunami in Japan followed by the ever-worsening stream of terrible news relating to the countries nuclear power facilities, even the last remaining advocates of the technology must realize that we can't go on like this. It is over. Done. Finished. Nuclear energy cannot be controlled by humans, no matter how good the arguments might be in its favor. The danger of disaster is real, and it can happen at any time -- even in a super high-tech country like Japan. And it could also happen here in Germany. A sense of security when it comes to atomic reactors is no longer possible. Not anywhere.

The earthquake in Japan is emerging as a decisive turning point in the history of nuclear technology. People learn from experience, and the lesson is clear: Not everything that is technically possible is a good thing. New ways need to be found to cover the energy needs of a growing population. And people need to move faster on this issue than they have so far.

That is true worldwide and also, of course, in Germany. After the events of the weekend, anyone who tries to claim that it couldn't happen here looks ridiculous. In Japan there was a chain of unfortunate events: the devastating earthquake followed by the disastrous tsunami. That is true. But what is a disaster apart from a chain of unfortunate events? Be it plane crashes, car accidents or core meltdowns, something will always go wrong when people are involved. At some point this unfortunate chain of events will also hit us -- or our neighbors, like France, a nation which is so fond of nuclear energy. And what will happen then?

Signs of a Dying Industry

Crisis meetings, security summits, special checks, those are the signs of a dying industry and the rearguard action of its political helpers. At some stage Germany will exit nuclear power -- and sooner than advocates of the technology like to think. Old fears of a massive nuclear meltdown have resurfaced in Germany. Traditional nuclear critics within the Green Party and the center-left Social Democrats will exploit these fears. A diehard pragmatist like Merkel will certainly recognize this. And she will change her course. That much is certain.

But how quickly will Berlin be able to shift its tack on the issue? Is the country really moving quickly enough in its adoption of sustainable energies? Certainly not. The companies operating Germany's nuclear power plants are earning billions, but only a tiny fraction of those profits are being channeled into the expansion of the country's use of alternative energies. That must change.

Of course it would be nonsense to switch off all of Germany's power plants overnight just to appease the critics. But the development of sufficient quantities of renewable energies requires political resolve. And that resolve can only be generated once it becomes clear that Germany's nuclear power plants will soon be taken off the grid permanently. That was the logic behind the decision to phase out nuclear energy in Germany by 2022 -- a policy established over a decade ago by Chancellor Gerhard Schröder's Social Democrats and their coalition partners, the Greens.

But that plan was reversed last autumn when Merkel's Christian Democrats, together with the business-friendly Free Democrats, put a halt to the phase out and passed legislation extending the operating lives of Germany's nuclear power plants. Now it is clear: That decision was a mistake. And that mistake must now be corrected.

No, it is no longer tempting to argue in favor of nuclear power. Not anymore. 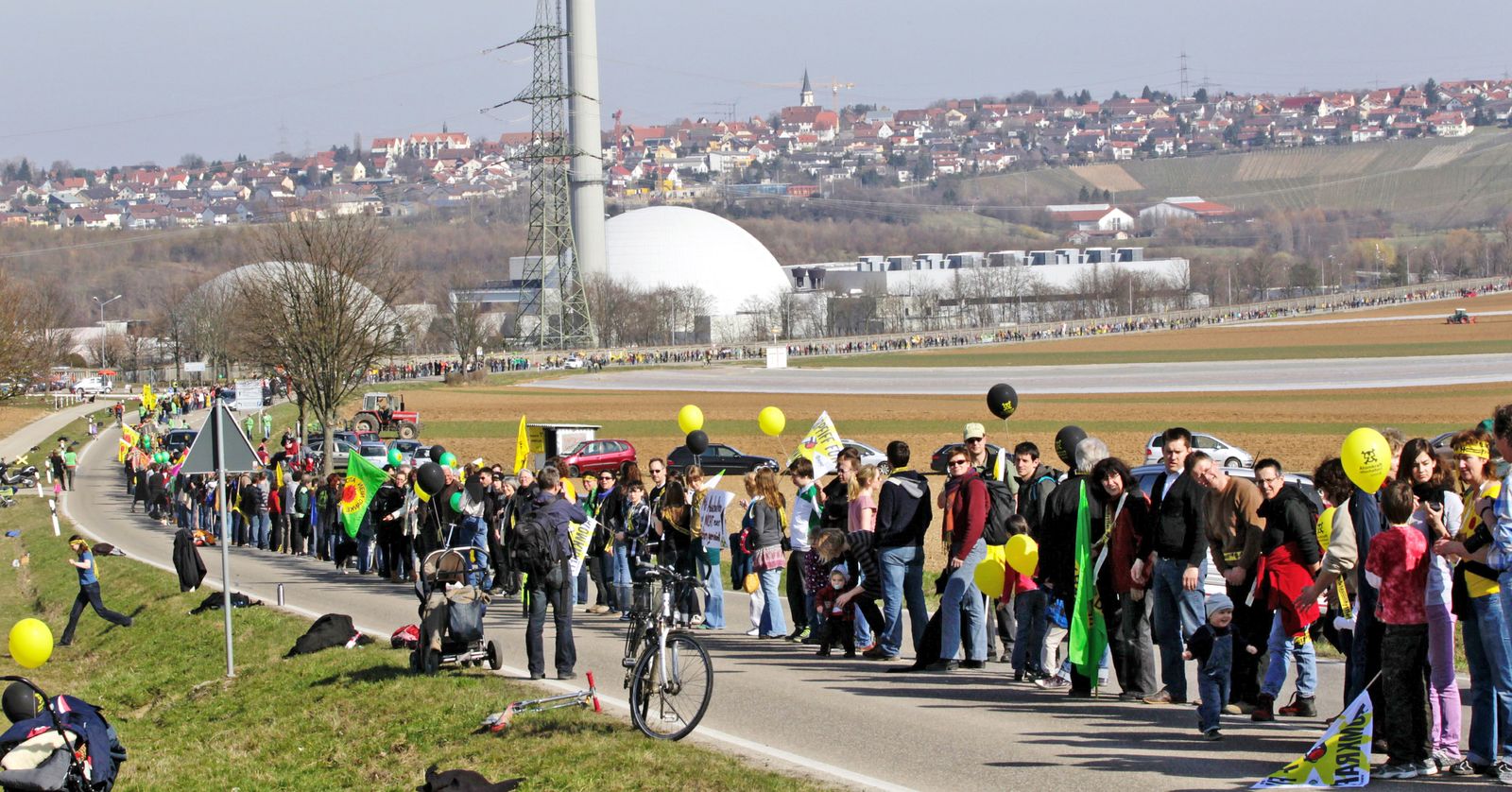 Protesters form a 45-kilometer human chain on Saturday between the Neckarwestheim nuclear power plant and the city of Stuttgart in southern Germany.