These are strange times -- times in which facts have less influence on political realities than mood and emotion. Numbers hardly count anymore, not as much, at least, as fear and hate, rumors and mutterings of conspiracy. That's why the German right-wing populist party Alternative for Germany (AfD) was able to do so well in the September 4 state election in Mecklenburg-Western Pomerania. The vote was essentially a referendum on Chancellor Angela Merkel's refugee policies, yet there are hardly any foreigners living in the state. We have more data and facts available to us than ever before, and yet we have entered a post-fact era. Why?

Were Germany a company, we would speak of structural change, of upheaval. The country -- blessedly safe and prosperous -- is surrounded by regions in crisis. The problems elsewhere reach us digitally -- permanently and amplified. But they also reach us in actuality. Our country is changing, with a feeling of uncertainty having become a paramount emotion these days, combined with a sense of indignity.

Angela Merkel has become a victim of this mood, and that is one side of the defeat suffered by her party, the Christian Democratic Union (CDU), in the Mecklenburg-Western Pomerania state election, where it received fewer votes than the AfD. The situation in the country, according to the facts, at least, is quite a bit different than it was in 2015. Residency laws have been tightened and the borders are back under control. But the AfD, which rails against a presumed "Merkel Dictatorship" on the country's market squares and baits people who are fleeing from poison gas, is fueled by post-fact politics (as is the Christian Social Union, the Bavarian sister party to Merkel's CDU). Just as American demagogue Donald Trump is able to keep up with Hillary Clinton, AfD leader Frauke Petry nips at the chancellor's heels with emotion. But that's not the whole story.

Many politicians, companies and institutions fail because they miss decisive shifts or deceive themselves. Former German Chancellors Adenauer and Kohl thought they were irreplaceable and became sluggish -- and didn't notice when they began losing ground. Kodak saw digitalization coming, but didn't want to see it. In the 1970s, Ford built a car, the Pinto, that everyone in top management knew would explode if it was rear-ended, but they all convinced each other that the problem didn't exist. Psychologists refer to such self-deception as the "normalization of deviance," and it works great -- until it doesn't.

A Bit of Self-Pity

Angela Merkel has made mistakes that could soon cost her the Chancellery and make a dignified departure impossible. Those mistakes are the other -- for her, painful -- side of the defeat. A head of government cannot allow herself petulant mood swings. After a decade of showing little interest in migration, Merkel was suddenly deeply moved in the summer of 2015 and decided to follow her emotions. Then, in the winter that followed, Merkel's actions once again cooled in response to public outrage, but she continued to defend the warm decisions she had made in the summer. She has never adequately explained the incoherence.

It was nice to experience a Germany exhibiting as much solidarity as it did in the summer of 2015. But a chancellor must also consider the possible effects of selfies taken with refugees. She has to think about whether the federal police force and other agencies will be able to keep up when the chancellor suddenly changes course. Shrewd governance requires clarity about, and the effective communication of, goals, strategy and tactics.

No leader can cede control of essential state responsibilities in times of upheaval yet Merkel, in claiming that the borders could not be controlled, did exactly that. Today, the Chancellery has come to accept the following facts: For eight weeks, the state lost control and was powerless. That control was soon regained, but in the post-fact era, a nucleus is all that is needed. The attacks in Paris and Brussels, the sexual assaults on New Year's Eve in Cologne, the attacks in Nice and Ansbach and the shooting spree in Munich: None of them had much to do with refugees, but they have prevented a return to calm and have kept alive the perception of loss of control that Merkel triggered in the summer of 2015. It has become simple to fan the flames of xenophobia.

What was once celebrated as Merkel's composed determination is now being condemned as obstinacy and the chancellor is taken aback. She thinks it's unfair, which is a bit self-pitying, but she remains interested in the problems she faces. As always, Merkel wants to continue, but it would be more astute for her to recognize the shift that is underway and the challenges it presents. And to determine in which moments facts and figures make sense and when might appeals to emotion be more useful. What strategies and which members of her inner circle have been effective thus far and what must be changed to confront the changed political reality?

She needs to go back to the beginning and find clarity about her own course. She must then rebuild trust, and provide extensive and repeated explanations for her actions. Because if she wants to ultimately leave office on top, she must reach out to voters who have thrown their support behind the AfD, to her own party, to CSU head Horst Seehofer and to Social Democratic party head Sigmar Gabriel. Nobody can confront structural change all alone. 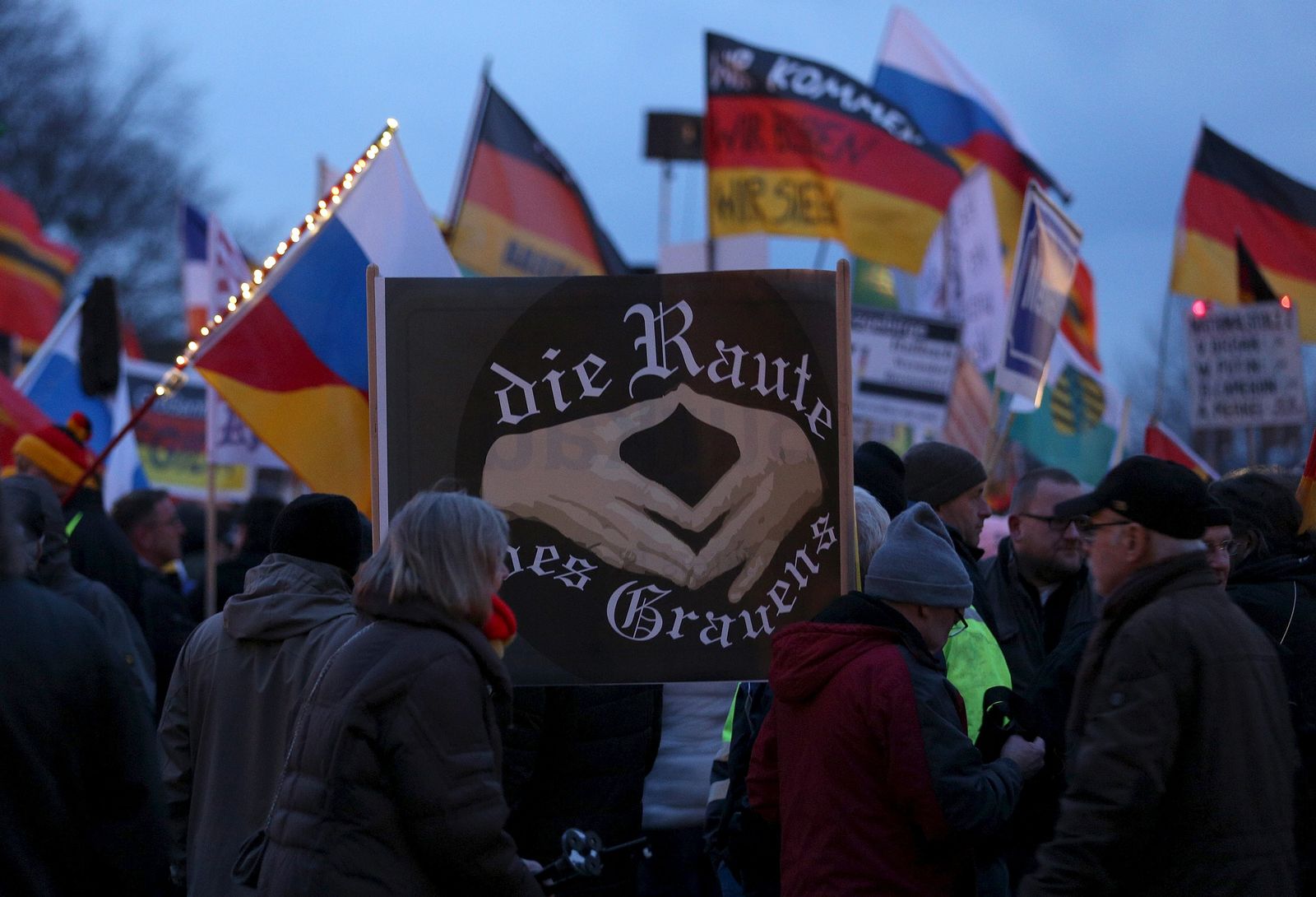 An anti-Merkel sign at a Pegida demonstration in March