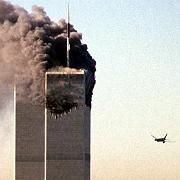 Have you heard this one before?

Jupp says to his friend Willy: "Hey, how's your wife in bed?" Willy says to Jupp: "Some say she's good, some say she's not."

Everything, as it happens, is relative. Three hairs in a bowl of soup are three hairs too many, while three hairs on someone's head are relatively few. Even the oldest jokes about this theory of relativity, the ones that wouldn't even get a laugh out of drunken fools, suddenly become precious pearls of humor to those who saw Tuesday's ZDF documentary titled "Sept. 11, 2001 -- What Really Happened."

Some might say the documentary was relatively harmless compared with the wildest conspiracy theories that have been circulating since the attacks, such as the one claiming that 4,000 Jewish New Yorkers who worked at the World Trade Center didn't show up for work on Sept. 11. But if we hold a documentary up to a different standard, the ZDF broadcast was relatively malicious, misleading and, most of all, deceptive from beginning to end. On its Web site, the network claimed: "ZDF research bears out accusations against authorities." The facts behind the documentary were supposedly provided by "well-known skeptics, experts and eyewitnesses to the attacks." ZDF also claimed that it would contain "never before published documents and footage."

Viewers asked who was really behind 9/11

The network trumpeted the documentary at full volume. But in reality, the "never before seen footage" consisted of a few close-ups from the engineering rooms of the Twin Towers, which could have just as easily been shot in ZDF's furnace room. The "well-known skeptics" were the usual suspects who have long been performing their acrobatics in the 9/11 circus. One was a former chairman of a local chapter of the German Social Democratic Party. He served as Minister of Research and Technology under former Chancellor Helmut Schmidt and has spent the last 25 years publicizing his revelations about the practices of intelligence agencies. Another one of ZDF's competent experts was a 23-year-old American who produced a "documentary" on his laptop that became a hit on the Internet and will soon be released as a film. 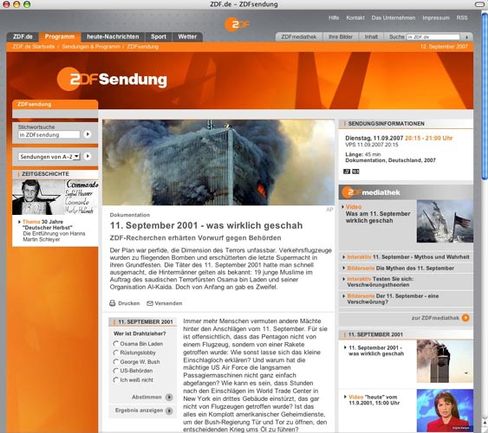 ZDF wants conspiracy buffs to have their say. Was it Osama, the arms lobby, President Bush or US authorities behind the Sept. 11 attacks?

In the interest of balance, several eyewitnesses to the Sept. 11 attacks were also interviewed. But almost everything they said was attacked and qualified by the skeptics and experts.

ZDF's Web site offers a glimpse of what happened after the show was aired. In an "online vote," viewers were asked who they believed was in fact behind the attacks. Twenty-five percent thought it was George Bush; another 25 percent blamed the US government; 15 percent thought it was the gun lobby's doing; 27 percent voted for terrorist leader Osama bin Laden and 6 percent had no opinion. This means that two out of three viewers swallowed the conspiracy theory offering, even though it was partially debunked at the end. Little remained of the "charges against the authorities," except for the fact, now well known and documented by a congressional panel, that the US security system failed when put to the test, and that no one was willing to admit it afterwards.

What makes the ZDF documentary on 9/11 so scandalous is not that it recycled old news and sold it as sensational new information -- this is not that uncommon among Germany's publicly funded television networks. The real outrage is the shamelessly light-hearted way in which it opened up the facts to question.

Of course, the re-evaluation of reality has become a daily occurrence. It includes Nazi family policies, for which new admirers are constantly emerging, as well as the "communism lite" that was practiced in East Germany and the "idealists" of Germany's notorious RAF terrorist group, who some are now claiming were no "ordinary murderers" because their goal was not to enrich themselves.

It has also become routine practice to distinguish between "political" and "criminal" motives for murders and hostage-taking scenarios.

Reality, it appears, no longer exists. Instead, what we have today are only various takes on reality, based on a "general absence of feeling," a circumstance political philosopher Hanna Arendt pointed out in her first book, "Visit to Germany," in 1949. In it, she wrote: "One feels smothered by a general public stupidity, which one cannot trust to correctly judge even the most elementary things"

In the case of 9/11, we have to ask ourselves a few questions before considering any conspiracy theory: Did Bush also order up the videos issued by Osama bin Laden and his associates, in which they claimed responsibility for the attacks? How can a government that can't even sweep a minor corruption scandal under the rug manage to sacrifice 3,000 of its own citizens without one person in the know coming forward with the truth?

Public stupidity, which we cannot trust to reach a sound verdict on even the most elementary issue, doesn't just believe that Bush and the gun lobby were behind 9/11, but also that the moon landing was faked, Lady Di was murdered, Elvis is still alive and that Captain Nemo sank the Titanic.