Chancellor Angela Merkel has probably saved her chancellorship -- but the price that her conservatives will have to pay for it is high. The election result for the center-right Christian Democratic Union (CDU) and its Bavarian sister party, the Christian Social Union (CSU), is lower than in 2005. Nevertheless, she can form a coalition government with the business-friendly Free Democratic Party because support for the FDP has increased in a way that until recently pollsters would scarcely have thought possible.

However, the interior architecture of the new Merkel-led alliance will be fundamentally different from "black-yellow" coalitions -- the name is inspired by the parties' official colors -- of the past. In the governments of former Chancellor Helmut Kohl, it was always clear who was calling the shots, because the Christian Democrats had four or five times as many seats as their liberal junior partner. That has now changed -- perhaps forever.

In the new constellation, Merkel will hardly be able to keep the promise that she made shortly before the election, namely that in a CDU/CSU-FDP coalition she would soften any demands by the pro-free market FDP that were too radical. Given the fat majority that the Christian Democrats and the FDP have in Germany's upper legislative chamber, the Bundesrat, it looks like Merkel will be able to have a smooth ride in terms of governing -- but whether the weakened Christian Democrats will be able to set the course seems doubtful. FDP leader Guido Westerwelle will be taking the initiative in the future government. The big question is whether he can do something with the support that the voters have given him.

The charge that Merkel handed victory to the competition because she had such a low profile in her position as leader of the conservatives will not be long in coming from within the ranks of the Christian Democrats. The attack on her position as party leader need not happen immediately, but it is safe to assume that the regional CDU governors will soon be discussing and preparing it. There is no shortage of candidates who have their eye on the CDU leadership, including the powerful governors of the states of Hesse, Lower Saxony and North Rhine-Westphalia. This means that, over the coming months, Angela Merkel will be waging a battle on two fronts: in a coalition where she will be fighting for influence with the FDP as junior coalition partner, and within her own party.

The wounded CSU will be of no help to Merkel in her bid to keep power over her coalition, but rather an obstacle. The FDP looks set to get more than twice as many Bundestag seats as the CSU, which only got 41 percent of the vote in Bavaria Sunday -- its worst result in decades. In Kohl's day, the CSU and FDP were either equally strong or the Bavarians were in the lead. This too marks a historic turning point for German politics; here too, the CDU/CSU-FDP power relations are shifting in favor of the FDP.

Nevertheless, the big loser of Sunday's election is still undoubtedly the center-left Social Democrats. Their result is below even the historic low that the party suffered in 1953 and which took it years to recover from. After 11 years in government, the party, whose status as one of Germany's two main parties seems to be in question since Sunday's election, is going into the opposition. The party is only 10 percentage points ahead of its upstart far-left rival, the Left Party. The Left Party is the result of a merger between the Party of Democratic Socialism (PDS) -- the successor to the communist party that ruled East Germany -- and WASG, a group of trade unionists and disgruntled former SPD members based in western Germany, and has managed to significantly eat into the SPD's share of the vote since it was founded in 2007.

Up in the Air

Left Party co-chair Oskar Lafontaine was once the chairman of the SPD. If it was his goal to humiliate the party that he left in 1999, then he has succeeded. It's safe to assume that a battle will now break out within the SPD for the subjugated soul of German social democracy. Everything else, however, is up in the air.

SPD chancellor candidate Frank-Walter Steinmeier has failed in his attempt to at least force a continuation of the current "grand" coalition with the CDU in a bid to win time. One can assume that almost everything is now up for negotiation: the role of the current two leaders, Steinmeier and party chair Franz Müntefering, in any case, but also the party's current moderate left-leaning politics, which its supporters in the end apparently saw only as a collection of empty promises. Which of the party's current policies will be sacrificed first? The raising of the retirement age to 67? Germany's controversial military mission in Afghanistan? The last legacy of the 1998-2005 SPD-Green Party coalition government under Gerhard Schröder, which marked a shift to the center for the SPD, will now be hawked off. But things do not necessarily have to stop there.

The mood that is now gripping the SPD could easily be described as panic. Already on Sunday, Frank-Walter Steinmeier staked his claim to be the party's floor leader in parliament. By doing so, he wants to send out a message of continuity during this hour of worst possible defeat. But the developments on Sunday night look less like continuity than a break with the past. Germans are experiencing the end of an SPD as they have known it since the 1960s. It was a party that was embedded in the leftist mainstream of West Germany but that also supported ties with Western allies, a party that developed policies not just for its political base, but also for the entire country. But in terms of its share of the vote, the SPD now has more in common with a special interest party than a major political force. What that means in political terms will now be the focus of bitter internal struggles.

When the Slaughter Is Over

Up until now it was considered a sure thing that the Left Party and the SPD would have to undergo a rapprochement if either party wanted any real chance of governing at the national level. But after Sunday, Left Party leaders Gregor Gysi and Oskar Lafontaine will be disputing this premise. With results that are just 10 points shy of the Social Democrats and even better than the Green Party, the Left Party won't need to be making any quick decisions. The Left Party leadership will wait for the SPD, once the internal party slaughter is over, to come to them. The other opposition parties, the Greens and the SPD, will now have to come to terms with the Left Party's new role as the driving force within the left-wing camp. And the Left Party itself will be perfectly satisfied with that role for the time being.

The Greens have gained votes, but to what purpose? Internally, the party has long been in the centrist mainstream, even if its leaders and members perceive themselves to be part of the leftist camp. But how can the Green Party hope to get into government with an SPD that has fallen so far and a Left Party that is politically regressive? After Sunday's vote, the Greens are the only party which is in a position to shake up Germany's established political camps, which until now have consisted of the CDU/CSU and FDP on one side and the SPD and Greens on the other. But it is doubtful whether they will have the courage to do so. The first answer to that will come soon in the states of Saarland and Thuringia, where the Greens are currently in coalition negotiations following recent state elections. In Saarland, for example, the Greens have to decide if they want to form a coalition government with the SPD and Left Party or with the CDU and FDP -- and they are keeping their options open.

After Sunday's election, the old West Germany, with its capital in the sleepy town of Bonn and its clear-cut political camps and power centers, is nothing more than a blurry memory. But the clearer the new political order becomes over the coming months, the more Germans will miss the sedate old days. 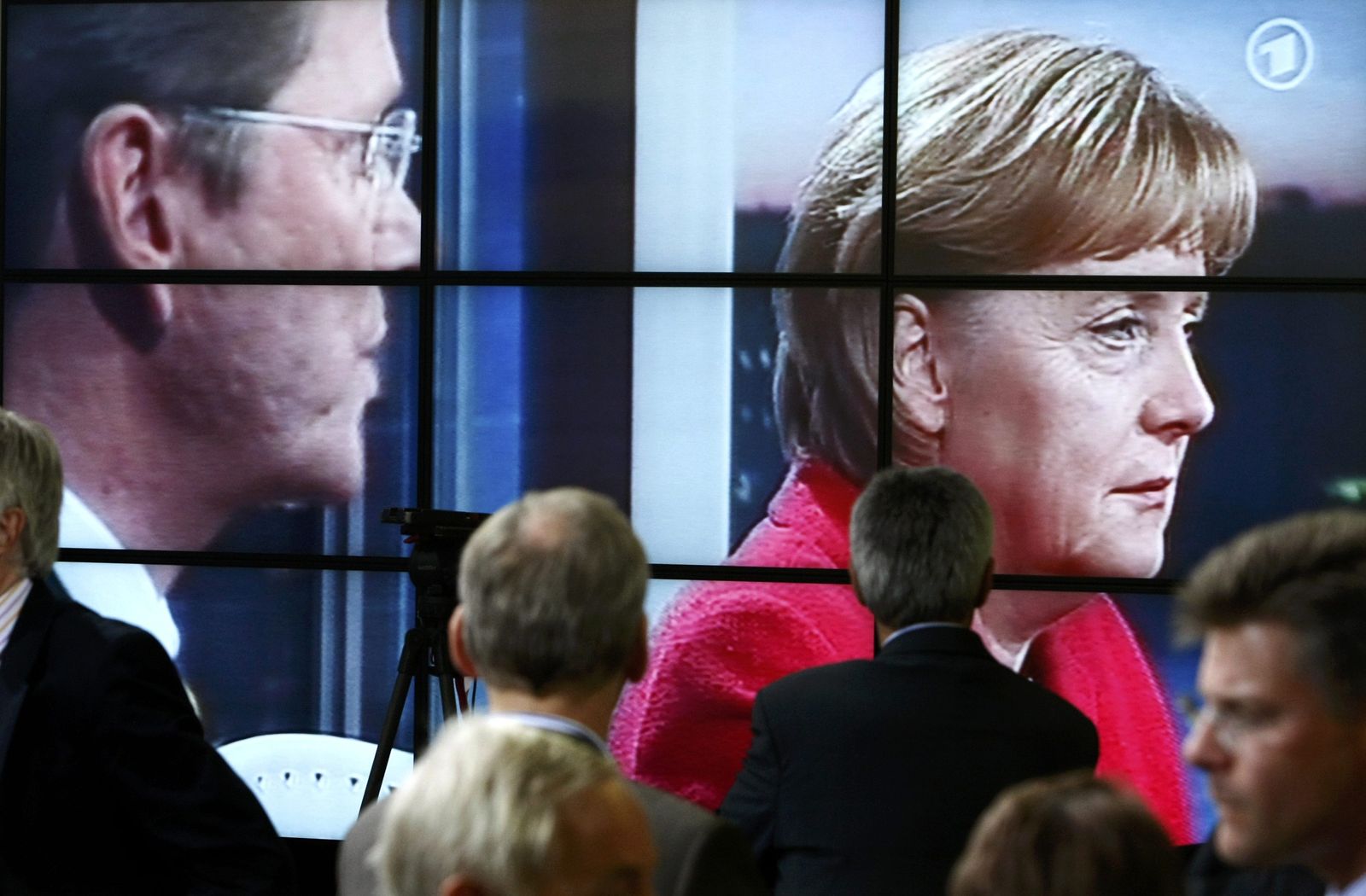 Angela Merkel has won a second term as chancellor of Germany -- but at what price?