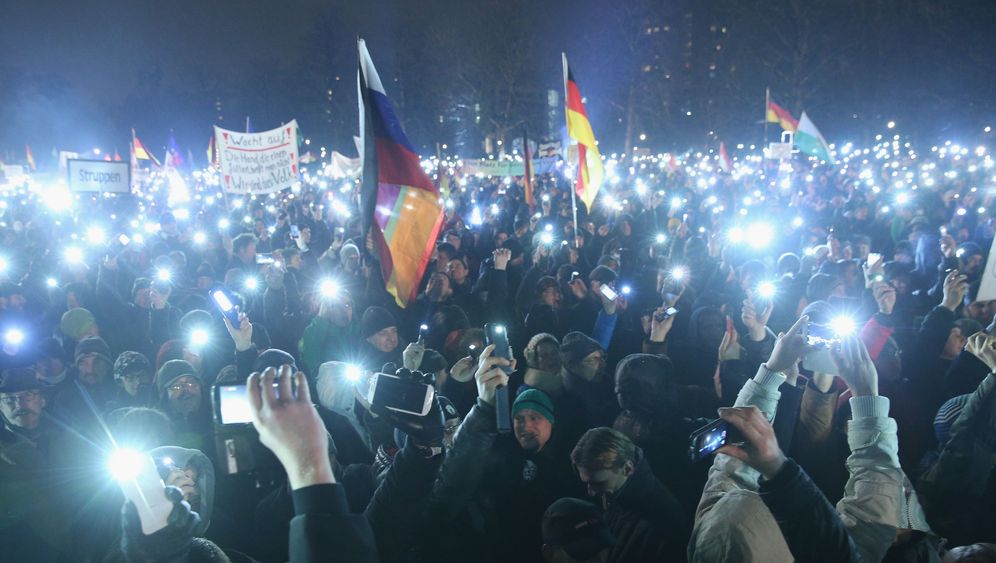 Photo Gallery: The Birth of a Movement

The proprietors of the Zentralgasthof, a concert and variety show venue in the town of Weinböhla in the Elbe River valley near Dresden, know what people of the region like. "Folk hits," are part of their program as is a Dresden-based cabaret artist known for his imitations of Erich Honecker, the former leader of communist East Germany.

On a Friday evening last November, the stage was turned over to Thilo Sarrazin, the bestselling anti-Muslim author. Outside the entrance, some 50, mostly young demonstrators were gathered. They called Sarrazin a "misanthrope and a blusterer"; one poster read: "Those who believe what Sarrazin says also believe the world is flat." But inside, there were 10 times as many people, cheering the author on as an iconoclastic thinker who has the courage to say what everyone feels. The audience was full of office workers, small businessmen and tradespeople. Normal folks.

Also in the audience were Siegfried Däbritz and Thomas Tallacker. They had both read Sarrazin's wildly popular book "Deutschland Schafft Sich Ab" -- or "Germany Is Doing Away With Itself" -- about the supposed dangers of immigration. But they were no longer satisfied with simply reading about the issues addressed in the book. Late last autumn, Däbritz, a security guard, and Tallacker, an interior designer, began marching at the front of regular demonstrations held by the still largely unknown group calling itself Pegida, an acronym for "Patriotic Europeans against the Islamization of the West."

The two men are among Pegida's foremost organizers: With eight others, they form the anti-Islam movement's core and they regularly meet to talk about the group's agenda and prepare the weekly marches, held every Monday evening. They also maintain contact with other protest groups across the country. Shortly before Christmas, they registered Pegida as an association.

Since last November, the number of people turning out for the marches has been growing, week after week. Fully 18,000 people gathered in the Dresden city center for the most recent march. This Monday, following last week's murderous attack on the editorial offices of Charlie Hebdo in Paris, it is to continue, with organizers expecting yet another record number of protesters to turn out. This time, they have asked people to wear a black mourning band in memory of the Paris victims -- a request which has led French caricaturists to condemn Pegida. 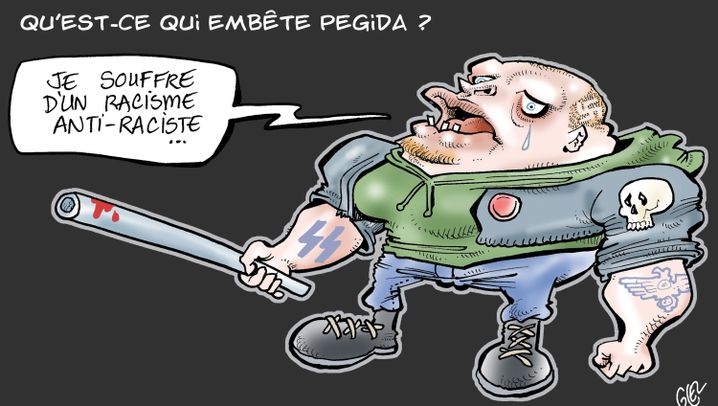 A Dash of Aggression

The movement has had trouble gaining traction elsewhere in Germany, with marches in Berlin, Cologne and elsewhere only attracting a few hundred people. And counter-marches have been sizable in Dresden as well. But the Monday marches have transformed Dresden into a destination for Islamophobes of all stripes, with people traveling to the Saxony capital from across the country just to take part.

But what are the motives driving those behind the demonstrations? How reflective is the movement of societal beliefs? Where did its name come from and how did xenophobia become its most important mobilizer?

The group's leaders frequently reject press inquiries, leading SPIEGEL, after several scheduled interviews were cancelled, to go digging elsewhere to find information about those who launched the movement. The result is an image of a group that seems to have come together more by accident than by design -- and one that soon became overwhelmed by its own success. Däbritz and Tallacker, who attended the Sarrazin reading together last November, are representative of mixture commonly found in the region: A significant amount of middle-class sensibility paired with commonly held fears of foreigners along with a dash of aggression.

It all began on Oct. 10, 2014. Lutz Bachmann, who has a small photography studio in the town of Kesselsdorf, located near Dresden, posted a video on YouTube showing a Dresden rally in support of Kurdish fighters battling Islamic State. One day later, he founded a Facebook group called "Peaceful Europeans against the Islamization of the West," which ultimately turned into Pegida.

The Facebook group quickly became a place where normal people came into contact with chauvinists and outright racists, as a look into Bachmann's virtual network reveals. Some of the first to join his army of defenders of the West included people who were also members of Facebook groups such as "I fucked it and now it's mine" or "Swallow, baby." They frequented strip clubs and were linked with motorcycle clubs and the notoriously right-wing fan groups of the third-league football team Dynamo Dresden. Pegida, in other words, began as a collection of right-wing rogues.

'We Are the People'

On Oct. 16, before the first demonstration took place, Siegfried Däbritz posted a comment to Bachmann's Facebook group. "We want to gather to oppose the advancing Islamization of our country. We don't want terrorist, Islamist powers to fight their religious war on our streets. We are against IS, PKK, al-Qaida and all the others," Däbritz wrote.

A phrase which later became one of the movement's main rallying cries could also be found in his Facebook post: "For this reason, let us take to the streets and show our region that WE ARE THE PEOPLE and that we are tired of paternalism, political correctness, Islamization and the constant insulting of us as Nazis just because we stand up for our country and for Europe!" "We are the people," of course, is the legendary rallying cry of protesters in East Germany in the months leading up to the fall of communism in the country.

Däbritz and Tallacker are among Pegida's earliest creative minds. Both grew up in East Germany in families of limited means. And, following the collapse of communism, both became involved in centrist political parties. In Meissen, the town just downriver from Dresden where they both live, the pair continues to be seen as respectable members of the middle class.

In addition to his security job, Däbritz, 39, also operates a guest house in the Meissen old town with his parents. His father spent years as a functionary of the local chapter of the business-friendly Free Democratic Party and his son initially followed in his footsteps. In 2009, he was elected to the leadership committee of the Meissen FDP chapter.

Däbritz rarely attracted much attention within the party. Instead, he posted quotes from Adolf Hitler in the Internet. He also belittled Muslims in other online comments, calling them "Mohammedan camel abusers" among other insults. Of the Kurds, who are currently fighting against the extremist Islamic State, he wrote: "They are just as big a danger to civilized Europe/Germany as all other currents among the Mohammedans."

Däbritz is a member of the German Rifle Organization, is thought to have ties with motorcycle gangs and hooligan groups and is believed to be a member of the German Defence League, a group of Islamophobes under surveillance by German domestic intelligence. Last fall, he also took part in the violent demonstration in Cologne organized by the group called "Hooligans against Salafists" (Hogesa).

Tallacker, 46, who runs an interior design shop, has also become more radical of late. He spent many years in the Meissen city council as a member of the Christian Democratic Union, the center-right party led by Chancellor Angela Merkel. Just a year and a half ago, he helped organized "Buntes Meissen," an initiative seeking to counter racism. He designed flyers for the group and helped assemble the stage prior to events. On Christmas, he would invite homeless people in for a meal.

On the Internet, however, he leads a different kind of life. In the summer of 2013, when he was still a member of the town council, he wrote on Facebook: "What should we do with the 90% uneducated hordes that milk welfare here and bleed our social state dry?" He also insulted the Green Party, calling its members "sluts". Following reports of a stabbing at a nearby lake, he wrote: "Surely it was again a deranged or half-starved Ramadan Turk."

Friends of Tallacker say that his political views are malleable and that he can be led astray, but that he is not a neo-Nazi. That may, perhaps, explain why the CDU was initially unable to find an adequate response to Tallacker's Internet musings. Geert Mackenroth, a CDU member of Saxony state parliament from Meissen and the state government's commissioner for immigration issues, didn't initially believe that any kind of discipline was necessary. Only when public pressure began to rise did the CDU force Tallacker to resign from the Meissen city council. It has since begun the process of kicking him out of the party.

Eight men and two women are listed as official members of the registered Pegida association. In addition to Bachmann, Däbritz and Tallacker, business consultant Kathrin Oertel, who functions as the group's spokesperson, is also a participant. A businessman who used to operate a Turkish bath in Dresden is likewise listed.

In the beginning, the group wrangled over what they should call their group. Some organizers were dissatisfied with the name "Peaceful Europeans against the Islamization of the West." One wrote: "I think the name is much too nice and compatible with the do-gooder faction. Do we need that?? Why does the word peaceful have to be in there? European? I am German ... NATIONAL is the word." Another wrote to Bachman: "Lutz, I'm leaving. I am too far to the right for the group ... but good luck anyway. And when you take up arms, let me know."

A Shot in the Arm

Pegida founders also talked about how they could avoid their group being seen as right-wing extremist by the German public. "We want to emphasize that this here is not to become a collection of right-wing crazies, neo-Nazis or the like but is the first step for a Germany and a Europe where people can once again say what they want, where patriotism is no longer a crime," Däbritz warned. Bachmann added: "It is clear that people will accuse us of being Nazis. But why should we make it easy for them rather than being clear about where we stand from the beginning: PATRIOTIC and not Nazi!"

Early on last fall, it seemed possible that the wave of demonstrations would cease before people outside Saxony even took notice. By the beginning of November, the Monday marches were only attracting a few hundred people.

But on Nov. 6, the Turkish-German writer Akif Pirinçci came to Dresden for a reading. In his book "Reflections on Germany," Pirinçci baits Muslims, homosexuals and what he sees as the hypocritical "tolerance republic." Many Pegida supporters were at the event, including Siegfried Däbritz. In an image he posted to the Internet, he can be seen holding up the Pirinçci book and wearing a T-shirt on which the word "Do-Gooder" is crossed out.

The evening with the anti-Muslim populist was organized by the head of the local FDP chapter. And the fact that it could take place at all was also thanks to an FDP member. Originally, the Goethe Institute branch in Dresden was to host the event, but cancelled at the last minute. The local Holiday Inn jumped in as an alternative; its manager is the former head of the Dresden chapter of the FDP.

People close to the Pegida organizers say that Pirinçci's reading helped to give a boost to the protests. An unprecedented 1,500 people came to the first march after the event.

Däbritz, too, was also apparently inspired by Pirinçci's reading. He has since become a member of the right-wing populist party Alternative for Germany.

8 Bilder Photo Gallery: The Birth of a Movement 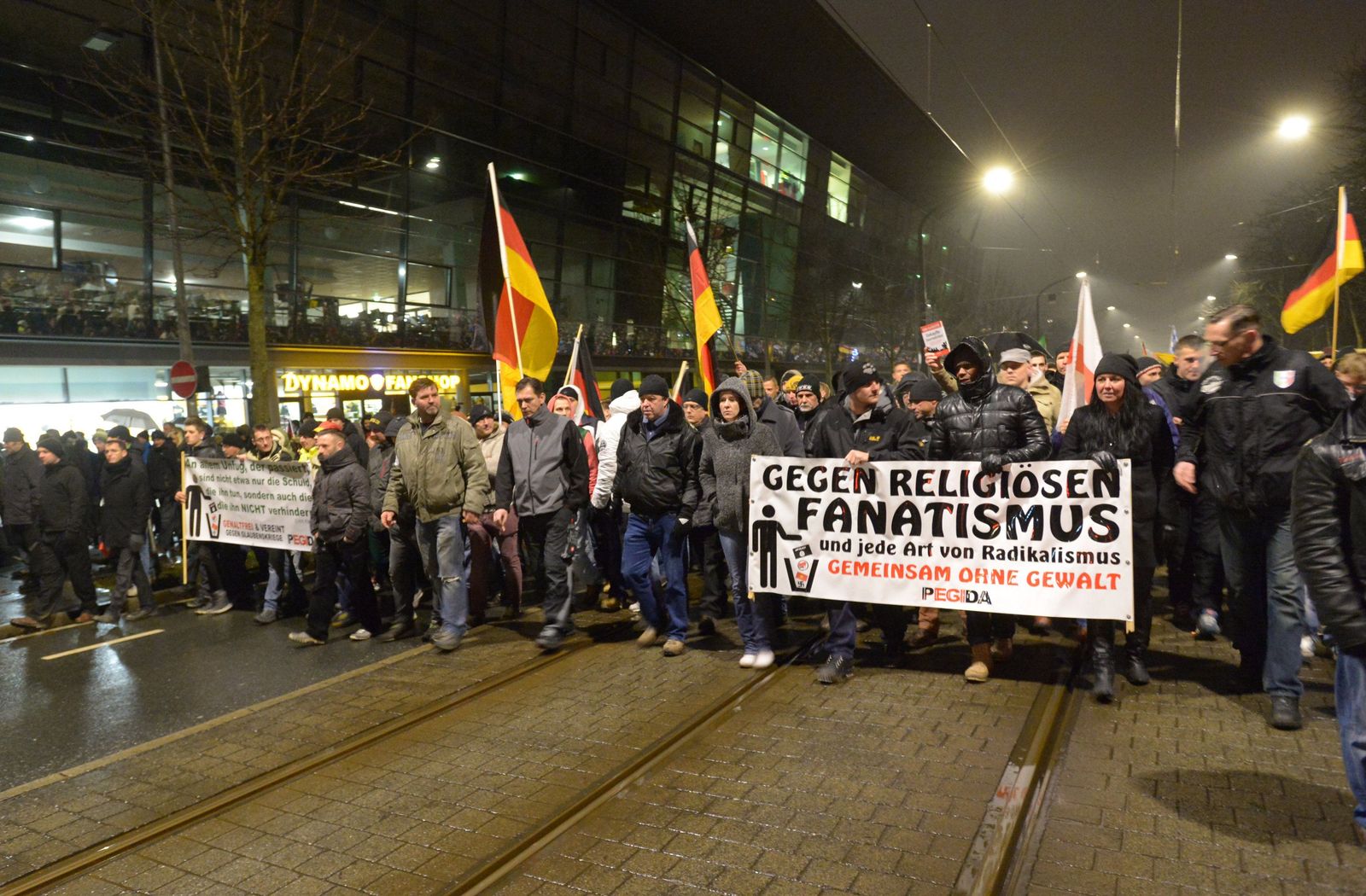 Demonstration participants on Jan. 5. Though the group has tried to keep radical right-wing sentiments at arm's length, some of its organizers have authored dubious Facebook posts. Siegfried Däbritz, for example, has referred to Muslims as "Mohammedan camel abusers" on the Internet.