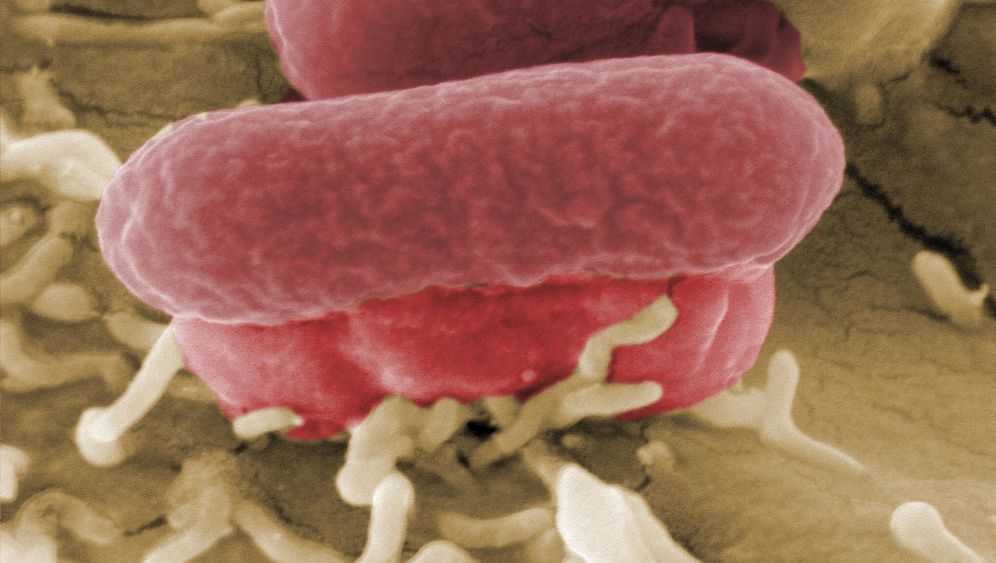 Teams of scientists and investigators are desperately hunting for the cause of Germany's deadly E. coli outbreak as doctors struggle to treat a growing number of patients. But as the deadliest ever recorded outbreak of E. coli continues to spread in Germany and to other countries, one thing has become clear -- health authorities were not fully prepared. Experts say the country's alert system is rudimentary compared to those in other developed nations.

The pursuit of the dangerous pathogen's origin began on May 19 after findings from the University Medical Center Hamburg-Eppendorf (UKE) set off an E. coli alert at the country's disease control center, the Robert Koch Institute (RKI). The next morning four RKI officials traveled from Berlin to Hamburg to question patients who were still conscious about what they had eaten, and where. What followed seemed like an incredible success. Many patients said they had eaten raw tomatoes, cucumbers and lettuce, and when Spanish cucumbers sold in Hamburg's central wholesale market tested positive for E. coli, health officials there proclaimed on May 26 that they had found at least one source of the outbreak. But the relief lasted just five days. Further tests revealed the bacteria was not the same serotype as the one isolated in patients.

Back where they started from, researchers then discovered that they were dealing with a very rare strain of the bacteria Enterohemmorhagic Escherichia coli (EHEC), never before seen by scientists in an outbreak before. The mutant strain of two separate E. coli bacteria was particularly aggressive, the World Health Organization said.

On Monday, hospitals all over northern Germany struggled to treat thousands of patients suffering from the effects of the bacteria. More than one-third of the people infected with E. coli have also come down with a life-threatening complication known as hemolytic-uremic syndrome (HUS) which attacks the blood, kidneys and brain, and has left doctors racing to save lives. Ambulances have reportedly raced between cities to get desperately needed dialysis treatments for victims' failing kidneys as demand for machines became unmanageable. Meanwhile, clinics have cancelled routine operations in order to focus on emergency rooms filled with people infected by the bacteria, which causes watery or bloody diarrhea.

At least 21 people have already died from the E. coli outbreak in Germany, where some 2,200 infections have been registered, mainly centered in and around Hamburg. But other cases have spread throughout the nation and beyond, with another death and even more cases reported in other European countries, including Sweden, Denmark, the Netherlands and elsewhere. Most of those infected are believed to have visited Hamburg or other parts of northern Germany.

Over the weekend, fresh sprouts became the latest suspected culprit. On Sunday, Gert Lindemann, agriculture minister for the western state of Lower Saxony, said officials were conducting lab tests on samples from a farm in the Uelzen district near Hamburg. Indications were apparently so strong that sprouts were the cause of the outbreak that the state's Consumer Protection and Food Safety Ministry recommended consumers avoid eating them. By Monday afternoon, however, the ministry revealed that 23 of 40 samples taken from various locations on the sprout farm had tested negative for the bacteria. The remaining 17 samples must still be examined, the ministry said. On late Monday afternoon, ministry officials said suspicions remained that the sprouts may have caused the outbreak.

Evidence does, however, indicate the outbreak is somehow linked to Hamburg's large wholesale produce market -- the same place where the contaminated Spanish cucumbers were found -- though officials remain uncertain whether the contamination occurred on the farm or during shipping, storage or packaging. "In recent days we've had long conference calls with other agencies and have determined that clues repeatedly point to Hamburg's wholesale market," an unnamed Bremen health ministry official told SPIEGEL. "It seems to play some kind of role or another."

Vendors at the huge market hall, which is as large as 30 football fields, have suffered immensely from a general fear of raw produce arising from the RKI's daily renewal of its recommendation for consumers to avoid tomatoes, cucumbers and lettuce. Meanwhile, the initial warning about Spanish cucumbers has sparked diplomatic tensions with Spain, which is now demanding compensation for lost sales. Though many of the some 150 fruit and vegetable wholesalers at the Hamburg market have voluntarily handed over their produce for testing, all of it coming back E. coli-free, some report they are still unable to sell up to half of their products. Thousands of cartons go to waste each day, shipped off for compost or biogas plants. With the produce destroyed, it may be too late to ever discover the bacteria's origin, experts warn.

"As the first people took ill, the contaminated batch had probably long since been sold," said Lothar Wieler, director of the Institute of Microbiology and Epizootics at Berlin's Free University. As the first HUS cases emerged, the vegetables would have already been eaten or thrown out, ultimately leaving the source a mystery. But therein lies the fatal mistake of the German health authorities. Eighteen valuable days were lost between when the first patient came down with diarrhea around May 1, and when the RKI was finally alerted.

While part of this may be because those infected waited until their cases became severe to see a doctor, the delay also indicates how unprepared German doctors were to properly report and handle the outbreak. Many fail to consider the possibility of an E. coli infection at all, sending patients with diarrhea home with a prescription and failing to take stool samples. But the larger problem is that local German health authorities are given abundant time to relay news of E. coli infections in their area. Infections, evidence of E. coli sources and even resulting deaths must be reported to state authorities just once a week, at the latest on the third working day of the week following initial identification. State authorities then have another entire week before they must inform the RKI. "Why can't this just be directly sent electronically?" asked Wieler of the Institute of Microbiology and Epizootics in Berlin.

Time is Running Out

While news of a potentially deadly outbreak can take up to two weeks to reach top German health authorities, other developed nations such as the United States and Japan, have instituted early warning mechanisms. A swift reaction is crucial in such situations, said Robert Tauxe, deputy director of the Division of Foodborne, Bacterial and Mycotic Diseases for the Centers for Disease Control and Prevention in the US. In 1993, officials there responded to an unprecedented E. coli outbreak by creating a registry system for every suspicious group of gastro-intestinal infections. Since 2001, every state and some large cities have had laboratories that analyze stool samples from potential outbreaks and catalogue different strains of the bacteria. The CDC checks it daily, Tauxe said, saying a similar system should already be in place not just for Germany, but all of Europe.

While such a system would be likely to curb another outbreak, fighting E. coli remains a daunting task. Although it was first identified in the early 1980s, relatively little is known about the bacteria. Until the latest outbreak, an average of 800 isolated cases were reported by doctors and clinics in Germany each year, but small outbreaks are also common. Some nine years ago in southern Germany experts determined that contaminated fresh apple juice from a farm stand had sickened 48 people. Three years ago in Lower Saxony, more than 30 elementary school students ingested the bacteria when they drank raw milk during a field trip to a local farm. These were small incidents compared to the worst E. coli outbreak on record, which happened in Japan in 1996, when contaminated radish sprouts at a school cafeteria caused about 10,000 infections and 12 deaths.

Part of the problem in identifying the source of an outbreak is sluggish testing. Though veterinarians, chemists, scientists and laboratory staff at the RKI are working "in accord," Silke Klotzhuber, an official with the Lower Saxony State Office for Consumer Protection and Food Safety, said, sample test results require some 36 hours. Final test results take a total of two to three days -- and even these aren't definitive. Only Germany's national reference lab can determine whether a sample truly matches the O104:H4 strain believed to be causing the outbreak, requiring even more precious time.

In the meantime, investigators are focusing on cucumbers, tomatoes, lettuce and, most recently, sprouts. They have monitored every domestic producer, following their channels of distribution, but without success. With so much time gone by, and another major failure on Monday, hope of finding the source appears to be running out. 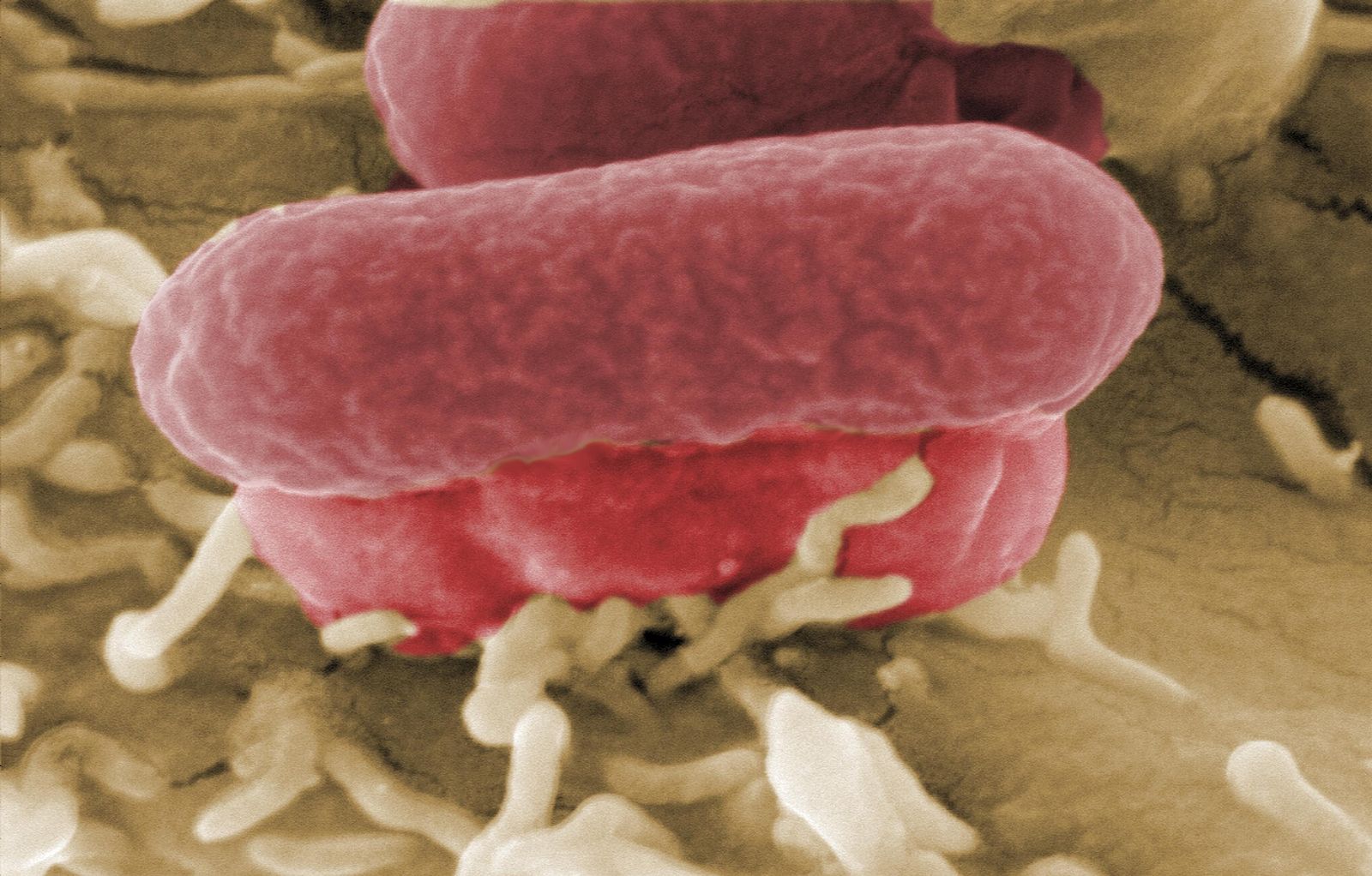 A look at E. coli bacteria through an electronic microscope. Scientists have failed so far to find the source of the E. coli outbreak that has been plaguing Germany since early May. Some 2,231 people in Germany have been infected by the enterohemorrhagic E. coli (EHEC) bacteria. Dozens of people from the Netherlands, Denmark and other European countries have also been infected. These are typically people who have recently visited northern Germany. 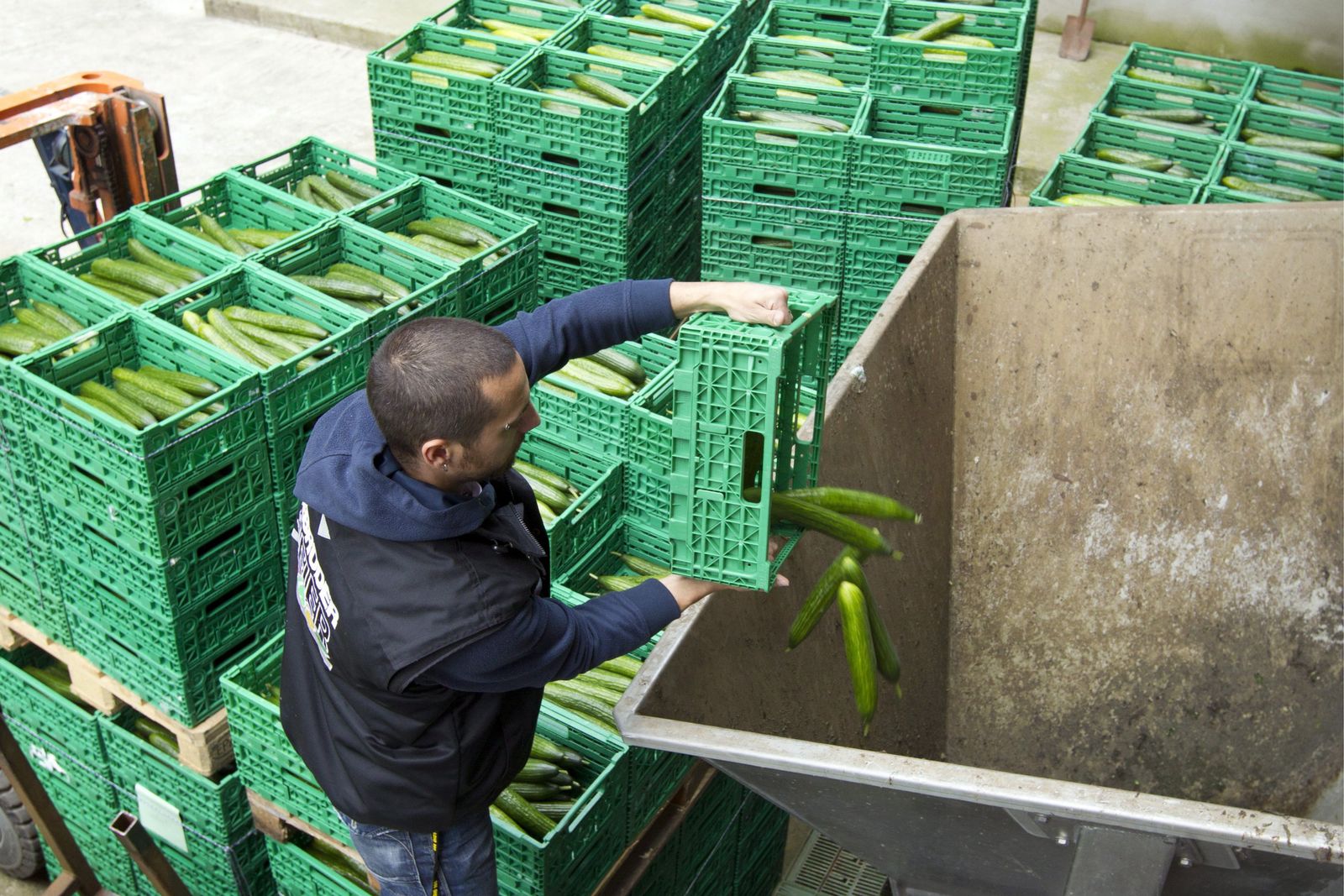 Agricultural industries in Spain estimate that farmers in the country lost up to 200 million euros per week due to the E. coli accusations. Spanish Health Minister Leire Pajin said on Monday that Spain wanted compensation for the damages suffered. But the German Health Ministry has defended its actions. 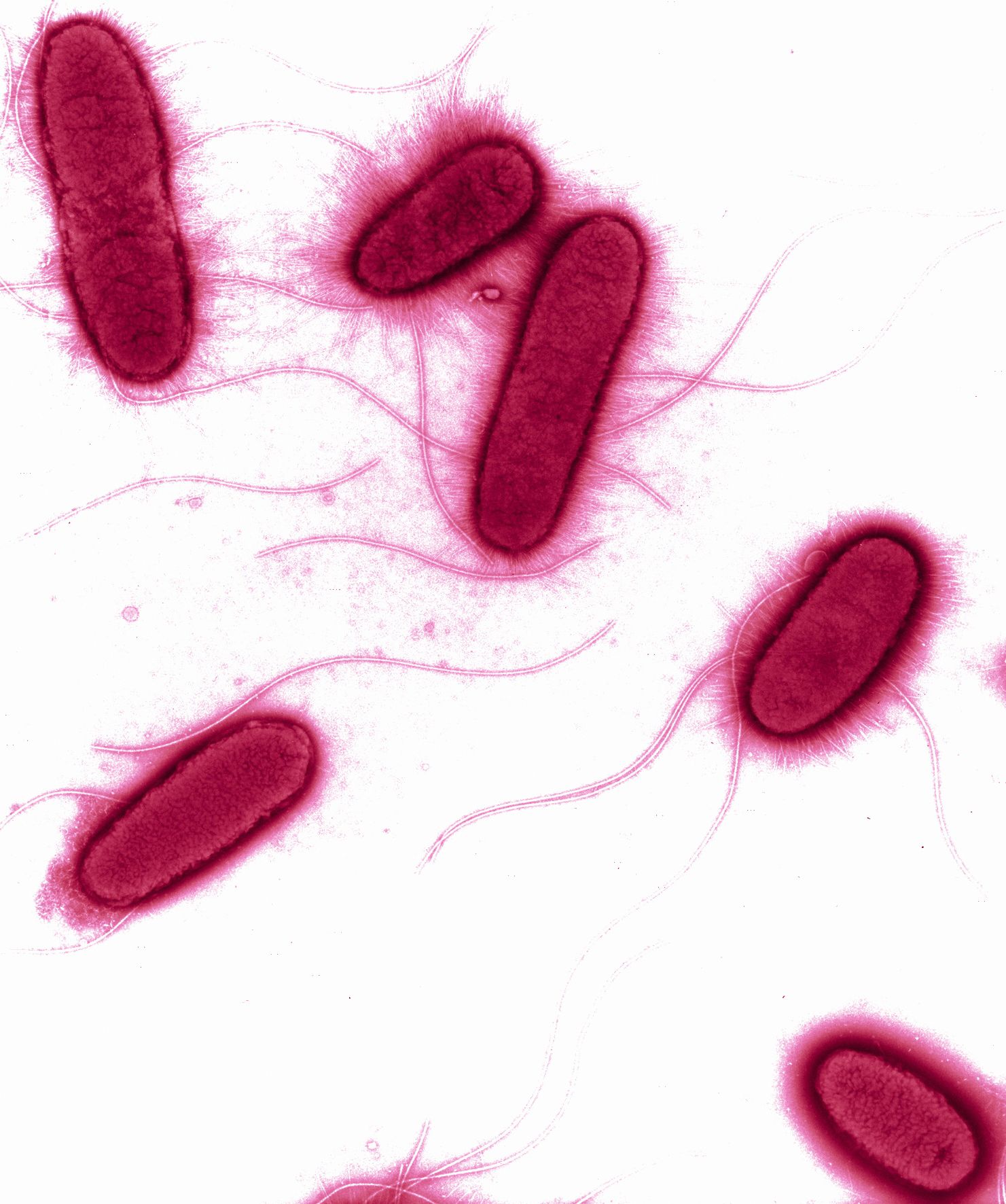 A microscopic image of the bacteria. Consumers are so scared that sales of vegetables and lettuce have plummeted in Germany.