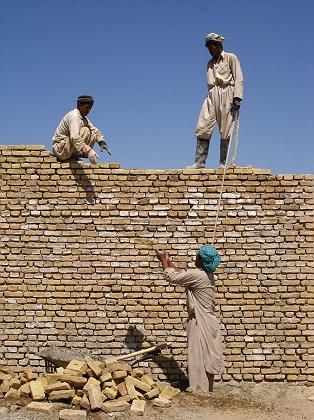 Workers build a school in the northern Afghan province of Saripul as part of a project funded by Welthungerhilfe, the German NGO.

Germany's foreign intelligence agency, the Bundesnachrichtendienst (BND), spent years spying on an office of a German aid organization in Afghanistan. The BND has informed the group, Deutsche Welthungerhilfe or German Agro Action, that it monitored the e-mail traffic of Afghanistan NGO Safety Office (ANSO), an agency run by Welthungerhilfe, between October 2005 and April 2008.

The surveillance was conducted "to identify and counter international terror attacks" and the analysis of the e-mail traffic served to "assess the general security situation in Afghanistan," and to protect German institutions in the country, the aid agency was told.

Intriguingly, during the period in question, Welthungerhilfe was run by Ingeborg Schäuble, the wife of German Interior Minister Wolfgang Schäuble.

ANSO is a joint operation based in Kabul which is funded by the European Union, Switzerland and Norway, and run by Welthungerhilfe. Its job is to bundle information gathered by NGOs. It has field offices in four Afghan provinces and the network is a "seismograph" for developments in Afghanistan, according to Welthungerhilfe.

BND evidently wanted to get hold of this internal knowledge as quickly and comprehensively as possible. The BND monitored at least 2,000 telephone calls, e-mails and faxes.

Welthungerhilfe issued a statement on Monday confirming that the BND had written to it about the surveillance operation. The aid agency said it was "appalled" at the revelation and would be taking legal advice.

"We Expect (an) Apology"

Its general secretary, Hans-Joachim Preuss, called on German Chancellor Angela Merkel to investigate the operation and to ensure that aid workers would not be put under surveillance in future.

"We find it astonishing and irritating that German state organs should monitor an independent German development agency," Preuss said in the statement. "We expect those politically responsible for this operation to apologize. And we expect them to pledge that such surveillance operations against the projects and the staff of humanitarian organizations operating in a dangerous environment will not be repeated in the future."

Nic Lee, project leader of ANSO, said: "It's an evident waste of taxpayers' money when organizations are spied even though their reports are publicly available. It undermines confidence in us. We will find it harder to get information from other non-governmental organizations if one has to worry about being under surveillance."

Deutsche Welthungerhilfe says it has been working in Afghanistan continuously since 1980. It focuses on improving rural infrastructure with projects to provide drinking water and irrigation, as well as to boost food production and protect land from erosion.

It has also carried out work to create job alternatives for farmers currently growing opium.

Uhrlau has been vehemently criticized by officials in Merkel's chancellery for his handling of an incident in Kosovo at the end of November when three BND agents were arrested in Pristina on suspicion of being behind a bomb attack on the EU headquarters in Kosovo.

The men were held for a week and German media reported that the BND had ignored alerts from the agents in advance of their arrest and had subsequently made a string of errors that meant the agents were kept in jail longer than necessary.

German news agency DDP on Sunday quoted unnamed "high officials in the Federal Chancellery" as saying Uhrlau was in "freefall" and had shown yet again "that he simply doesn't have his house under control."