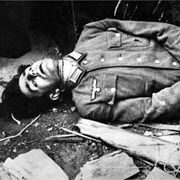 The Nazis executed more than 30,000 Wehrmacht soldiers. Thousands, however, still bear the scarlet letter of conviction -- in many cases unjustly.

Consider the case of the German soldier who, in May 1944, attempted to smuggle 13 Jews out of Hungary into Romania in order to save them from the Auschwitz gas chambers. At a border check, his illegal cargo was discovered hiding in the back of his army truck. A military court sentenced the soldier, whose name has been lost to history, to death for treason.

Or the July 1944 case of Adolf Hermann Pogede, likewise handed over to the hangman for treason. His offense? He allegedly told Soviet prisoners of war that Hitler was leading Germany into the abyss, thereby awakening the prisoners' resistance instincts. Or Josef Salz, shot in February 1944 for writing in his diary that, in the words of a certain General Hoernlein, "he was a friend of Jews and Bolsheviks and that he reviled the German Volk, its leadership and army."

The three all have two things in common. They were all convicted by the notorious Nazi military courts of so-called Kriegsverrat -- treason committed by members of Hitler's Wehrmacht. And they all belong to the final group of Nazi military court victims who still haven't been rehabilitated in post-World-War-II Germany. But a new draft law -- presented to Germany's parliament, the Bundestag, in May -- aims to nullify all such treason convictions. And German Justice Minister Brigitte Zypries seems to be listening.

A Question of Political Will

"When it comes to the victims of the Nazi military courts, those convicted of treason represent the last group that hasn't yet been rehabilitated," Wolfram Wette, a Wehrmacht expert who has just finished a new book -- "The Last Taboo: NS Military Justice and Treason," due out in July -- told SPIEGEL ONLINE. "When you read the case studies, you can't do anything but (rehabilitate them.) It's a question of political will."

At the Berlin opening of a travelling exhibit dedicated to victims of Nazi military justice last week, Zypries seemed to indicate that the political will might very well be at hand. Just a year after rejecting a blanket rehabilitation of World War II military treason cases, Zypries indicated the Wette's research might be enough to change her mind. "This study gives lawmakers cause to discuss anew the topic as to whether one should lift all convictions of military treason across the board," she said in her speech last Thursday.

Yet despite the renewed momentum towards righting a six-decade-old wrong, it is by no means sure that the draft law, presented by the far-left Left Party on May 10, has a chance of passing. After all, Germany has confronted the issue of Nazi Military Court victims before. In 1998, the Bundestag passed a law rehabilitating those convicted by the Nazis of refusing to serve in the Wehrmacht. Germans found guilty of undermining the war effort, treason convicts and spies were likewise rehabilitated. In 2002, military deserters were added to the list.

Soldiers convicted of treason, though, were left out of both laws, parliamentarians preferring that they be dealt with on a case-by-case basis. And the concerns voiced in both 1998 and 2002 are still alive and well today.

Causing the Deaths of Comrades

"Those convicted of committing military treason were often guilty of criminally harming their comrades, of putting their lives in danger and of causing their deaths," argued Norbert Geis, a legal expert for the conservative Christian Social Union in German parliament, in a May 10 speech submitted to the parliamentary record. "For example, if the treasonous soldier crosses to the enemy lines  and reveals the positions of his own comrades."

In other words, Geis told SPIEGEL ONLINE, "those who didn't commit treason should be rehabilitated. Those who did should not be."

It is a point of view that Wette has difficulty understanding. He says arguments like Geis' come from a lack of clarity about the soldiers convicted of military treason and what they did. Which is why he spent years looking into the cases of 69 convicted Wehrmacht soldiers, none of whom are still alive. His findings? Only very few of those actually convicted had any contact at all with enemy soldiers. Indeed, most of those convicted, he says, were involved in political resistance to the Nazi killing machine, helping Jews or prisoners of war, or fighting for the resistance.

"When you read the case studies, you can't do anything but change your mind," Watte says.

Jan Korte, the Left Party parliamentarian behind the new draft law, agrees. "It is one of the last chapters from World War II that needs to be closed," he told SPIEGEL ONLINE. "What can be more honorable that betraying the Nazis' war of extermination?"

Korte points to the fact that Germany's military courts, which passed down fully 30,000 death penalties during the Third Reich, were one of the most powerful arms of Nazi oppression. They sentenced four times as many people to death as Hitler's notorious Volkgerichtshof -- or "People's Court." Responding to Geis' argument, Korte said: "It is unbelievable. A catastrophe. A scandal. I can't believe he said that now in 2007."

The brewing argument about how to handle those convicted of military treason represents one of the final open chapters from Germany's World War II history. For decades, the country has confronted issue after issue in an attempt at penance or resolution. Earlier this month, €4.4 billion ($5.927 billion) worth of reparation payments to forced laborers brought to work in the armaments factories of Nazi Germany came to an end. Indeed, some of the most heated recent World War II-related arguments have been in Berlin, where signs of monument fatigue seem to be emerging: With so many memorials already in place in the capital, how many more should be built in memory of the victims of Nazi crimes?

Historians Further along than the Politicians

The current debate on military treason convicts threatens to degenerate into more of a political spat than a historical discussion. Korte's Left Party, as a successor to the East German Communist Party (SED), is not well loved and is hardly the group to build a broad coalition. Even the center-left Social Democrats (SPD) are hesitant about Korte's bill.

"If one can show me research that shows that all treason convictions were fueled exclusively by Nazi ideology, I'd be in favor of a blanket ruling," Carl-Christian Dressel, the parliamentarian who has taken the lead for the SPD on the issue, told SPIEGEL ONLINE. "As is often the case with Korte's party, their proposal is broad and general where a bit of differentiation might be better."

And historian Wette? He thinks it's only a matter of time until the military treason convictions are nullified. "We had a similar debate over the last 20 years about the deserters. There were similar reactions," he says. "The military treason group are small people who have been left behind by justice. As usual, the historians are much further along than the politicians."