US General Stanley McChrystal, the commander of United States and NATO forces in Afghanistan, has heard the question before: Will more soldiers die in Afghanistan in 2010 than in previous years? The US four-star general, who is standing in Berlin's Ritz-Carlton Hotel in front of a small group of journalists on Wednesday, breathes deeply and pauses for a long while before answering.

When he finally speaks, he gives a non-answer. No, he says, he has not come to make predictions or prepare the German government for even more deaths. He couldn't do that even if he wanted to, he says.

McChrystal wants to explain what he has in mind. He believes that NATO can succeed in Afghanistan, he says. And no matter how hard the journalists press him, he does not mention a single demand. "I am not asking for more troops," McChrystal said. Instead, he said, he is putting the 5,000 additional American troops that are being deployed to northern Afghanistan unconditionally under German command.

With his comments, the general revealed a refreshingly realistic view of the Afghanistan conflict. His message: We can win the mission, but that's not a given.

Last year McChrystal shocked many with his revelation that the Taliban, and not NATO, had gained the upper hand in Afghanistan. Now, according to his analysis, the situation is reversing -- but very slowly. "We must act now, otherwise it will be too late," he said. What he was effectively promoting was a final attempt by the US to somehow bring about a successful end to the Afghanistan mission.

At first glance, the outcome of McChrystal's visit to Berlin was surprising. Observers had expected new demands, in the form of requests for more German soldiers and a greater willingness to take risks on the part of the Germans. Some newspapers had already spoke of a supposed "wish list" that McChrystal was bringing with him. Instead, the general repeatedly praised the German armed forces, the Bundeswehr. He said he was "deeply moved" by the achievements, professionalism and sacrifice of the Germans. He also expressed his regrets over the recent deaths of seven German soldiers in Afghanistan.

With his mild words, McChrystal was trying to accommodate the German government. Some three hours after the event at the Ritz-Carlton, McChrystal, dressed in an immaculate dark green dress uniform with sparkling medals, was standing next to Defense Minister Karl-Theodor zu Guttenberg. Guttenberg didn't need to explain to him how difficult it is to sell the Afghanistan mission politically in Germany, where a majority of Germans oppose the Bundeswehr deployment. As recently as Wednesday morning, Bundeswehr Inspector General Volker Wieker had returned home from Afghanistan with the four soldiers who died in a Taliban attack last Thursday.

In their discussions, the two officials paid particular attention to McChrystal's exit strategy. That strategy envisions training as quickly as possible tens of thousands of Afghan soldiers who will then be responsible for the security of their country. It is supposed to happen quickly: US President Barack Obama wants to start withdrawing the first US soldiers as early as 2011. To make that happen, McChrystal has developed a new approach. Speaking in Berlin, McChrystal became enthusiastic when he talked about so-called "partnering," in which international soldiers train Afghans more or less by fighting together at the front.

From McChrystal's perspective, the new approach represents the key to success. "The international forces have better weapons and more fighting techniques," he said. "The Afghans speak the language, know the customs and have much better access to information." The best approach, therefore, is for units to fight, eat and live together, he said, explaining that that is the way camaraderie is built.

These are the moments in which the soldier in McChrystal can be heard. It's clear that he would like to be taking part in the training himself.

For the Germans, the new strategy involves far greater risks than before, as the deaths of the four soldiers last week made clear. Although the operation "Taohid II" that the soldiers were participating in did not make any real use of partnering, it was intended as a kind of blueprint for how the Bundeswehr can give practical training to Afghan soldiers. The aim was to drive the Taliban out of the Baghlani-jadid area with 3,000 Afghan soldiers using concentrated force. The Germans were to support the operation with logistics and technology. In last week's attack, three soldiers were killed by a booby trap and a doctor died when the armored ambulance he was traveling in came under fire.

Guttenberg assured McChrystal that the Bundeswehr would also train the Afghan National Army (ANA) in combat operations beginning at the start of 2011. The defense minister is speaking these days in increasingly realistic terms about the new approach. The partnering strategy conceals "new and greater risks" than current Bundeswehr activities, he said Wednesday. The situation in the north will become "dangerous, in parts even very dangerous," he said, adding that there was no point in "beating around the bush" when discussing the issue.

Apart from his official appearance, McChrystal also spoke very directly about the mission, in particular about the German-controlled north of Afghanistan. During the session at the Ritz-Carlton, he announced, without giving details, more military operations against the Taliban in their strongholds around Kunduz and Baghlan. "We have already achieved a lot there, and together we will do even more this year," he said. He described the German-led Regional Command North as "extremely important," particularly because of an vital new NATO supply route, which will transport cargo from Latvia to northern Afghanistan via Russia, Kazakhstan and Uzbekistan.

With McChrystal's visit, both sides wanted to signal that they now want to work together rather than at cross purposes, as has often been the case in the past. As well as his meeting with Guttenberg, the US general also spoke with the heads of Germany's intelligence services and called for a better exchange of information on the Taliban. Guttenberg, for his part, paid tribute to the US pilots and medics who risked their lives to rescue German soldiers from the two recent deadly skirmishes in northern Afghanistan.

German forces will be increasingly dependent on US help in the coming months. The Bundeswehr has long suffered from significant gaps when it comes to the air transport of troops and special forces. The US Army is now moving quickly to fill these gaps. McChrystal will redeploy at least 56 US helicopters to Kunduz and Mazar-e-Sharif in the coming weeks.

This massive aid will also, however, make it harder for the Germans to resist the new, at times very robust, American strategy -- including the relentless pursuit of the Taliban. 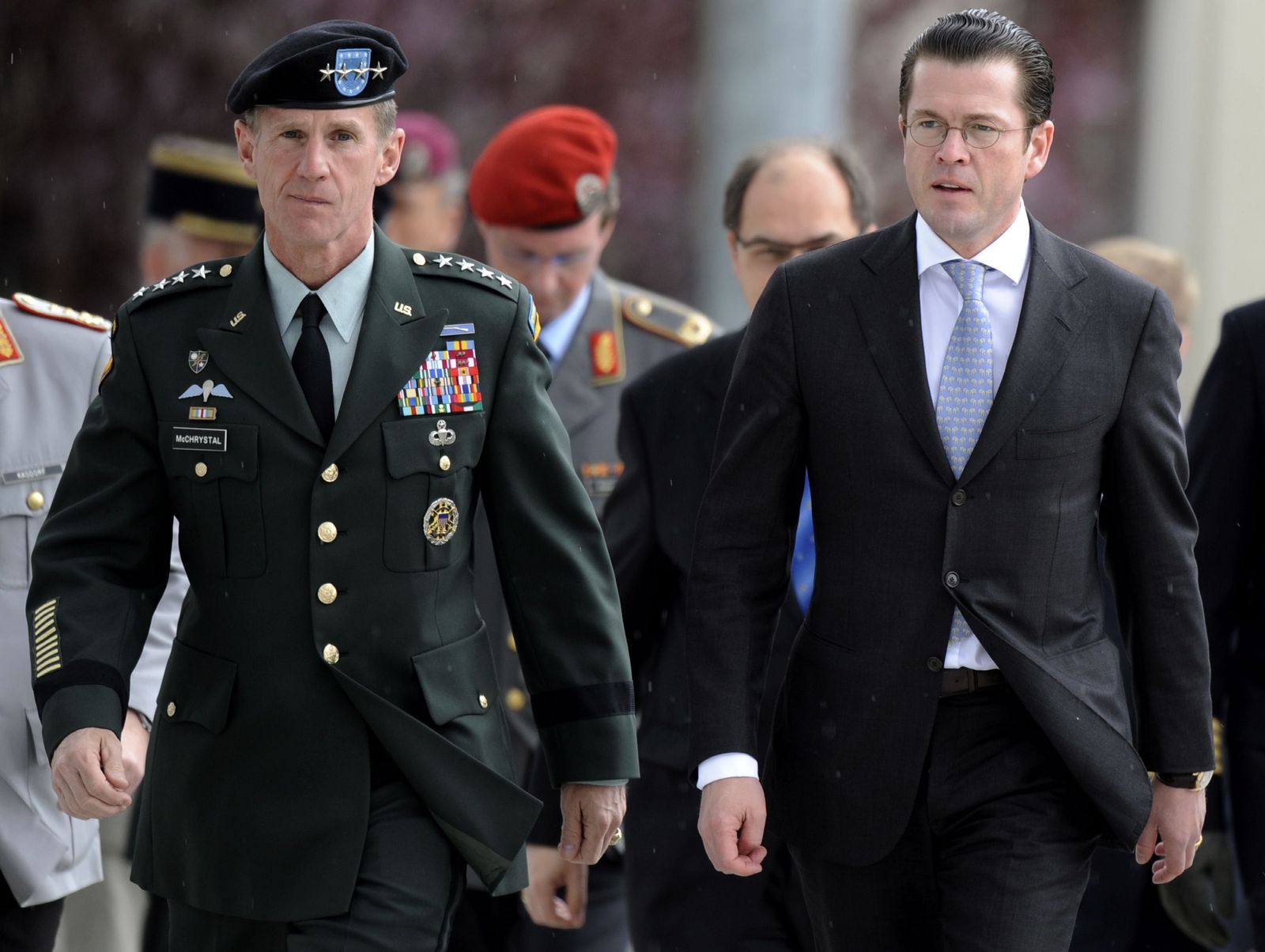