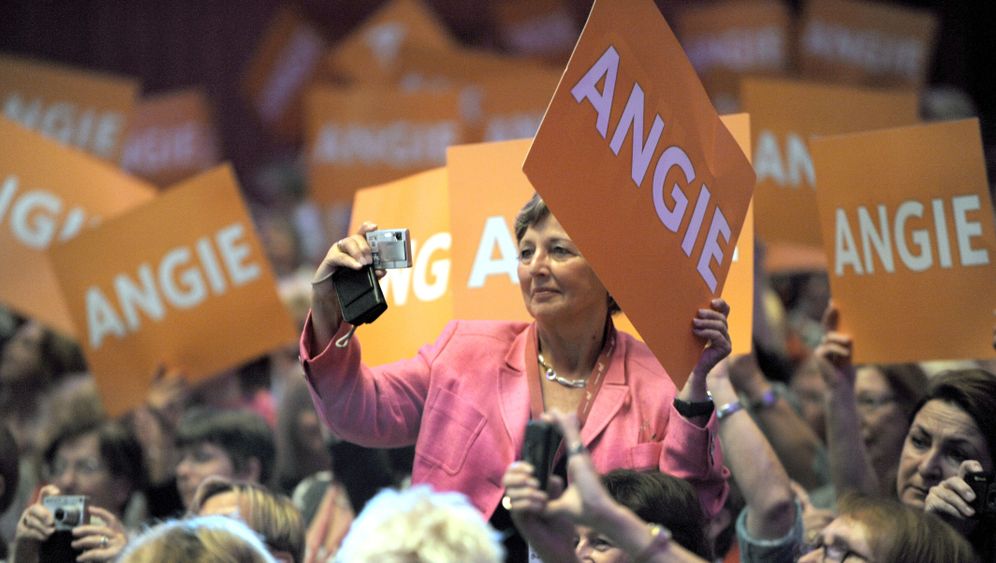 On that auspicious day, Angela Merkel wore black. In a buttoned-up pantsuit, she sat in the front row of Germany's parliament. Then she approached the front of the room, raised her right hand and swore the oath of office. It was November 22, 2005, and Germany had gained its first female chancellor, something women across the country hoped would bring them beneficial changes. Emma magazine, a key publication in the women's movement, rejoiced with the headline, "We Are the Chancellor!"

Seven years on, the prevailing mood is one of disillusionment. Two weeks ago, Merkel rubberstamped legislation approving a controversial childcare allowance known in German as Betreuungsgeld, a pet project among older, male politicians in Merkel's center-right Christian Democratic Union (CDU), and particularly in its Bavarian sister party, the Christian Social Union (CSU). At the same time, Merkel has brushed off the European Commission's proposal to institute a gender quota for non-executive boards across the EU. Nor has the chancellor taken up the cause of female retirees, although many people have called for her to do so. Emma editor-in-chief Alice Schwarzer, initially so euphoric about Merkel's election, later concluded that the chancellor seemed to have learned to steer clear of certain things, "at least when it comes to women's issues."

The CDU's party convention in Hanover this December will likely be an opportunity for women to express their frustration. The party's regional conferences in recent weeks have shown that the euro crisis is not the only issue on the minds of the party's voter base. Women's issues loom large as well, from gender quotas to the childcare allowance to pensions for mothers. But Merkel has remained passive. When it comes to women's issues, Merkel keeps her distance.

Annegret Kramp-Karrenbauer, governor of the state of Saarland and a member of the CDU, sits in her office at Saarland's representation to the federal government in Berlin and takes a deep breath. The governor has recently done something few within the CDU would dare -- she risked open conflict with the chancellor. When asked whether Merkel pursues policies that are good for women, Kramp-Karrenbauer doesn't make angry statements. Rather, her disappointment in Merkel becomes clear through her actions.

Kramp-Karrenbauer wants to establish a fixed gender quota for the supervisory boards of companies listed on the stock exchange. This September Hamburg, a state whose government is headed by the center-left Social Democratic Party (SPD), introduced an initiative on this topic to the Bundesrat, the upper chamber of the German parliament, which represents the 16 individual states. Kramp-Karrenbauer declared her support.

'We Need to Take Action'

The chancellor wasn't happy. In a preliminary discussion the evening before a vote on the issue, Merkel told the Bundesrat that she didn't think Hamburg's solution was bad. "But we won't be able to implement it with the FDP," she concluded, referring to the pro-business Free Democratic Party, junior partner in her center-right coalition. For Merkel, that meant the discussion was over. But Kramp-Karrenbauer stood firm and voted in favor of the Hamburg approach the next day.

"Angela Merkel is a realpolitik politician through and through," Kramp-Karrenbauer says. In cases where the chancellor knows she will face stiff resistance, for example from her party's coalition partner, she chooses simply not to raise the issue at all. But for Kramp-Karrenbauer, that's not enough. "Our economy has a glass ceiling that women are not breaking through," the she says. "As the governing party, we need to take action."

Other areas of conflict are emerging as well. Kramp-Karrenbauer and a number of other women in the CDU, for example Minister of State Maria Böhmer, want mothers whose children were born before 1992 to also have three years of child-rearing added onto the career span used to calculate their retirement pensions. This is a matter of justice, they say. The CDU has pushed for this plan multiple times, but nothing has come of it. Now the conflict threatens to escalate at the party's convention in December unless the chancellor manages to create another compromise. "One solution would be to scale mothers' pensions according to how many children they have," Kramp-Karrenbauer suggests.

What has Merkel achieved in terms of policies that affect women? Kramp-Karrenbauer can think of just one issue: "She advanced the expansion of daycare facilities enormously. That was a great cultural achievement."

The country and the CDU have indeed changed since Merkel took the helm. Germany's parental benefits, known as Elterngeld, as well as a system that allows additional parental leave if it is split between both mother and father, have helped make women with both careers and children more of the norm. But this particular success is largely due to the efforts of former Family Minister Ursula von der Leyen. Merkel's main contribution was allowing von der Leyen the freedom to make such decisions, and in providing targeted support to other women around her.

One such example is Hildegard Müller, who met Merkel in the early 1990s when Müller was head of the CDU's youth organization known as the Young Union, and Merkel was the CDU's secretary general. The two women got along well and held one another in high regard, and began establishing a network with other CDU women that quickly came to be mocked as the "girls' camp." When Merkel became chancellor, she brought Müller along to the chancellery as her minister of state.

Then Müller became pregnant. "I immediately offered to resign, but that was out of the question for Merkel," Müller says. Merkel made it all possible, offering her minister of state the opportunity to leave her position for her first year of motherhood and then return. Thanks to Merkel, Müller experienced no professional setbacks, no break in her career.

In 2008, Müller moved into a highly paid position in the private sector, heading the German Association of Energy and Water Industries (BDEW), a lobbyist group in Berlin. When she speaks of Merkel now from her large office, her loyalty and gratitude are clear. But ultimately even she sounds a bit disappointed in Merkel's women's policies. There was certainly a hope that a female chancellor would show more of a presence on women's issues, Müller says, but concludes that the euro crisis was simply too dominant.

A contrary coalition partner party, an epic currency crisis and a party that in many places is still dominated by men -- there are doubtless outside forces preventing Merkel from devoting more attention to women's issues. But she also seems to possess an internal resistance, a deep-seated incomprehension of some gender debates that she herself never engaged in.

When Merkel joined the CDU in 1990, the West German dialogue about equality was something foreign to her as someone who grew up in the German Democratic Republic, where working mothers were the norm. And as a physicist, Merkel had held her own in a men's world, and didn't experience her gender as a disadvantage. In 1991, Helmut Kohl appointed her minister for women's affairs, a position she didn't quite know what to do with. At the time, Merkel's view was, "There is something degrading and insulting about a quota."

But by the time Merkel became head of the CDU, she sensed she had become a symbol, and that her role as a powerful woman was awakening hope in others. "What concerned me most was that an incredible number of expectations from women were being projected onto me, including the wishes of women who don't care about the CDU in the least, with the result that I can't help but disappoint them," Merkel told her biographer Evelyn Roll.

After seven years as chancellor, it is time for Merkel to show her colors. Will she continue to distance herself? Was that it for women? Or is there still something more to come?

Those close to the chancellor insist Merkel has changed on women's issues -- for example, they say, she now supports implementing a quota, and in fact wants it to be as binding as possible. From her time as Environment Minister, Merkel knows that counting on companies to commit to such policies voluntarily sounds good in principle, but often does no good in the end. Stodgy business owners from former West Germany annoy her just as much as self-satisfied CDU men do -- and sometimes she shows it.

"Women have been terribly neglected in the economy," she declared this October at a Young Union gathering in the city of Rostock. And in her welcoming speech to the Federation of German Wholesale, Foreign Trade and Services (BGA) several weeks ago, Merkel glanced over the rows of men in gray suits and commented, "This group could stand to have a few more join it. Women, I mean."

What keeps Merkel from a full commitment to a gender quota is calculated strategy. The topic is a troublesome one, because both the FDP and Bavaria's CSU oppose it. If Merkel ends up governing together with the center-left Social Democratic Party (SPD) or the environmentalist Green Party in 2013, the gender quota will be part of the coalition agreement, the chancellor's aides say, pointing out that Merkel is perfectly pragmatic on this point.

Kramp-Karrenbauer finds that prospect too vague, and besides, the European Commission has now come out in favor of an EU-wide quota. "If we don't move on the gender quota issue, we'll end up being forced to do so by Brussels," the Saarland governor says.

To Kramp-Karrenbauer, the CDU itself is the best proof that quotas really work. In 1996, the party introduced a quorum so that more women would advance within its ranks. The result could be seen in Ludwigshafen last Tuesday, where the CDU held a regional conference in a hall packed with 1,700 attendees. Of the seven party leaders who took seats onstage, four were women, including Kramp-Karrenbauer. Next to Merkel sat Julia Klöckner, head of the CDU in the state of Rhineland-Palatinate, with the two women whispering together and looking quite close.

"The more we grapple over the pros and cons of a legal quota, the more pressure there is on companies to promote," Klöckner later said backstage. Klöckner herself has benefited from a gender quota, something she openly acknowledges. The CDU's quorum provided her a good position on the party's candidate list in 2002, which landed her in the Bundestag, Germany's lower house of parliament. She became the party's parliamentary liaison to the Ministry of Agriculture, then the CDU's leader in Rhineland-Palatinate. Without the quota, Klöckner says, she wouldn't have made it as far.