Germany's Social Democrats have finally zeroed in on a candidate to run against Chancellor Angela Merkel in next year's general elections. Senior party officials confirmed to SPIEGEL ONLINE on Friday that the SPD plans to present former Finance Minister Peer Steinbrück as the center-left party's lead candidate.

The news comes on the heels of reports that SPD parliamentary floor leader Frank-Walter Steinmeier, who led the party in its 2009 loss to Merkel's conservatives, had withdrawn his name from consideration. A press conference is planned for Friday afternoon.

The timing of the news comes as something of a surprise given the SPD's plan to refrain from choosing a candidate until later this autumn, or even as late as next January. In an interview with SPIEGEL published on Monday, Steinbrück said: "You can't let a candidate run for too long," he said. "He will be dragged along, cut apart, put back together and ripped to shreds again -- from both the political opponents and the media."

But it had also become clear that SPD head Sigmar Gabriel, originally part of the trio of party leaders under consideration for the candidacy, was simply not popular enough among the population at large to be the party's face in a general election campaign. A recent survey pitting Gabriel head-to-head against Merkel gave him only a 16 percent popularity rating against 60 percent for the chancellor.

Steinmeier, for his part, had long been lukewarm about leading the SPD into the general election campaign again. In 2009, the party received a paltry 23 percent, the SPD's poorest showing since World War II. Steinmeier, who was foreign minister in Merkel's first cabinet as well as former Chancellor Gerhard Schröder's chief of staff, was heavily criticized within the party in the aftermath of the debacle.

The Most Dangerous Candidate

Still, despite the hard-to-miss signs that Steinbrück was emerging as the front-runner, the party had maintained its stance that a candidate wouldn't be announced until November at the earliest.

Steinbrück is widely respected in Germany for his handling of the financial crisis as Merkel's finance minister in the 12 months following the 2008 bankruptcy of Lehmann Brothers in the US. By all accounts, he and Merkel worked well together in helping Germany weather the economic storm.

Recently, Steinbrück has been in the news following the presentation of his concept for controlling the financial markets and preventing a repeat of the financial crisis. The report calls for splitting off investment banking from the traditional lending and savings functions associated with retail banking. It also foresees the creation of a bank-funded aid fund to bail out troubled financial institutions, as well as controls on certain types of transactions. Both the timing and scope of the report made it seem like a significant plank in a campaign platform.

A Steinbrück candidacy is not free from controversy within the party, though. The left wing of the party views him with skepticism, accusing him of being too conservative, and his grassroots support is not as robust as it could be. He also currently doesn't hold an office within the party.

Political analysts, however, believe that Steinbrück is the most dangerous of the three for Merkel. His centrist stance could allow him to poach middle-of-the-road voters from Merkel's Christian Democrats and he has excellent name recognition in the country. His greatest challenge, however, will be that of mobilizing left-wing SPD voters to his cause. 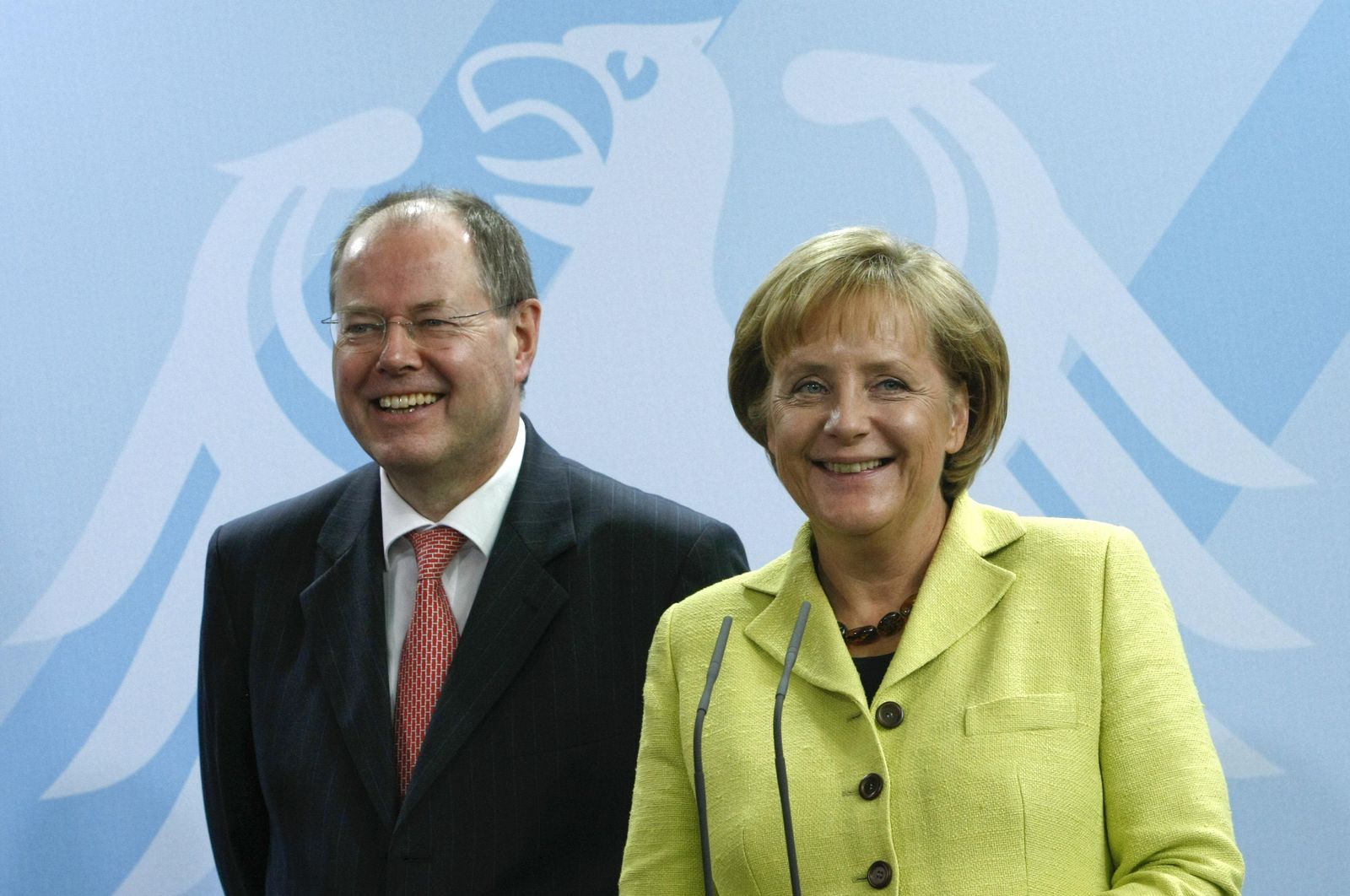 SPD chancellor candidate Peer Steinbrück together with Chancellor Angela Merkel in 2009, when he was finance minister in Merkel's cabinet.