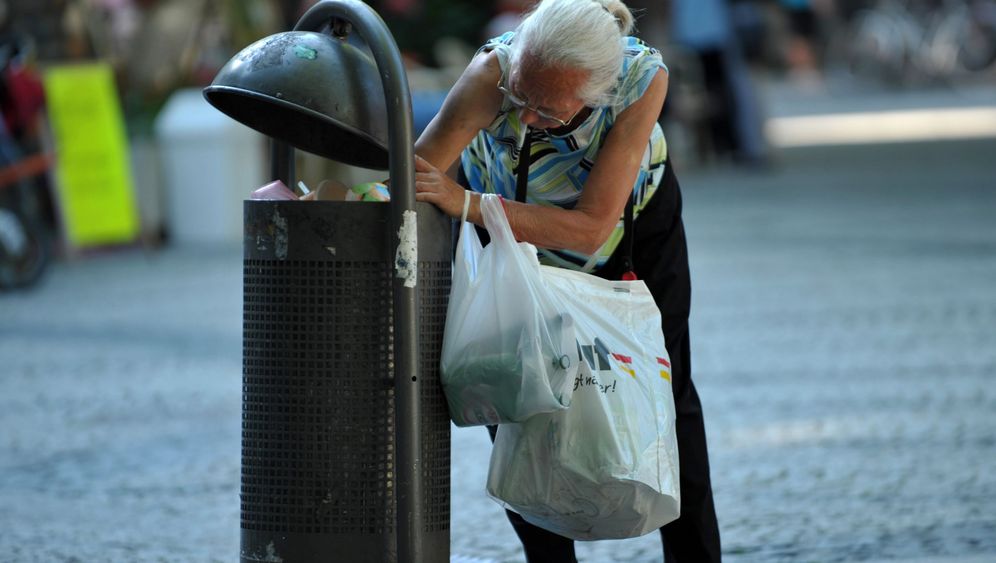 To see Günther rummaging through trash cans in Berlin, you might assume he was homeless. But the 61-year-old is actually one of a growing number of pensioners looking to earn extra cash through bottle recycling.

Significant numbers of financially destitute people are now resorting to collecting discarded glass and plastic bottles, which carry a redeemable cash deposit, as a means of supplementing their income. But whereas the majority of those collecting used to be the homeless, alcoholics and drug addicts, more recently it is Berlin's pensioners and long-term unemployed who are increasingly turning to the practice in order to make ends meet.

Sabine Werth, who heads Berliner Tafel (Berlin Table), a non-profit organization that distributes food donations to charities in the city, says she believes the number of pensioners resorting to bottle collecting has as much as doubled in the past few years. Social experts are warning that the unhygienic practice is a symptom of an inadequate social system struggling to cope with the growing population of elderly residents in the German capital.

"People just throw the bottles away anyway, so why not make a bit of money out of it?" says Günther, who did not want to be identified by his last name. The former mechanic was forced into early retirement due to illness and has been collecting bottles in his local district of Tempelhof for the last few years. He says his pension of €700 ($920) per month is simply not enough to provide a decent standard of living. He can earn up to €5 per day through bottle collecting, money which he spends on food and drink.

"I collect bottles all year round, depending on my mood," explains Günther, who says the activity helps him to gain social contact. "I get to meet all sorts of people, which can be fun. I had a job in a museum for a while, but I nearly died of loneliness in that place."

His supplementary source of income is only possible because of German laws aimed at encouraging recycling and reducing waste. In 2003, the German government introduced a mandatory deposit on one-way packaging for drink products such as beer, mineral water and fizzy drinks -- non-carbonated drinks, wine, milk and spirits are exempt -- with the aim of encouraging recycling. (Multi-use bottles were already subject to a deposit.) The deposit paid on each bottle, which ranges from 8 euro cents for a multi-use glass beer bottle to 25 cents for a larger one-way plastic bottle, can be redeemed in cash at stores and supermarkets.

The rise in bottle-collecting is a symptom of the social problems which have affected Berlin since the fall of the Wall in 1989. The city may have a large creative class, but the German capital remains heavily in debt and unemployment is stuck at over 13 percent.

Coupled with the increase in part-time contracts and lower wages, pensioners in Berlin are being forced to survive on smaller and smaller pensions. In 2009, some 57,500 out of a total population of 648,000 pensioners living in Berlin needed welfare support from the state to top up their pensions, costing the federal and state government a total of €318 million in subsidies -- an increase of 42.5 percent over 2006.

As people struggle to make ends meet on unemployment benefits and depleted pensions, more elderly people in Berlin are relying on charitable organizations for social assistance in the form of clothing and food. They include the Bahnhofsmission, a Christian charity that maintains drop-in centers in Berlin's main train stations and Berliner Tafel.

Berliner Tafel's Werth is all too aware of the rise in the numbers of people turning to bottle collecting as a means of financial support. At one time, she says, it might have been considered shameful to go fishing around in trash cans looking for empties. But now increasing numbers of people are accepting it as a viable means to make money, especially those who find themselves in long-term unemployment or are surviving on meager pensions.

"For the older generation it provides a sense of purpose," she told SPIEGEL ONLINE. "They see it as a reason to get out of the house and come into contact with people." Bottle-collecting also benefits the environment, she explains. "But it is really about breaking out of the cycle of poverty and loneliness -- two things which almost always go hand in hand."

At first glance, Günther's bottle-collecting sounds like a productive pastime that gives him social contact and an opportunity to bolster his income. But it is hard to ignore the social and economic realities that are driving increasing numbers of people onto the streets in search of empties.

Until recently, Günther had been collecting empties from Tempelhofer Feld, a disused airfield turned public park which is popular with picnickers in summer. But then guards warned him off. "It was quite lucrative there until the security guys started getting heavy and told me to disappear," explains Günther. "I know it's because they don't want all the tourists seeing the real poverty in Berlin." He now has to collect the majority of his bottles from underground stations during the night.

Those who in the past managed to make money collecting the bottles that other people throw away are now facing increasingly tough competition. Berlin residents describe a boom in bottle-collecting, and there are stories about unscrupulous collectors who hover over people drinking in public, waiting to seize their empties.

Amid such stories of desperation, one young Berliner decided to do something to make life easier for Berlin's bottle collectors. Communication design student Jonas Kakoschke is the founder of an online scheme that aims to unite unwanted deposit bottles with collectors. It started out as a joke between Kakoschke and his friends about what to do with the large number of empty beer bottles left in their apartment after a raucous house party. That turned into the website Pfandgeben.de, which launched in July 2011. Members of the public are able to log on and find contact details for a local collector in their area. The collector then takes the bottles to the nearest collection point and gets to keep the pre-paid cash deposit on each bottle returned.

The feedback has so far been very positive, and the site has attracted considerable media attention. Founder Kakoschke has been surprised by the types of people registering as collectors. "My one concern was about drunks turning up on people's doorsteps to collect bottles," he says. "But that isn't the case at all. In actual fact, most of the collectors I have spoken to are pensioners or unemployed people looking to earn a bit of extra cash to get by."

The scheme has grown rapidly since its launch and has been expanded to include other German cities such as Cologne, Augsburg and Essen. But whilst many see it as a logical way for people to be able to help Berlin's bottle collectors, who provide a useful service in return, Sabine Werth from Berliner Tafel is more cautious in her assessment. "The online scheme is interesting, but it will inevitably be targeted by collectors who have the capacity to take large quantities of bottles," she says. "It won't help the majority of collectors who are really destitute, since they tend to make their living gathering small numbers of discarded bottles from trash cans and on the street."

Despite the circumstances, collectors such as 64-year-old Uwe (not his real name) continue to put a brave face on the situation. Unemployed and suffering from acute diabetes, he has been fishing for discarded bottles in the bins and courtyards of Berlin's Kreuzberg district for the past two years.

"I really need the money because unemployment benefits are not enough to live on," says Uwe, loaded down with carrier bags full of empty bottles hanging from each arm. "I guess it gives me something to do, cleaning the streets up a bit. And I manage to lose a bit of weight from all the walking." 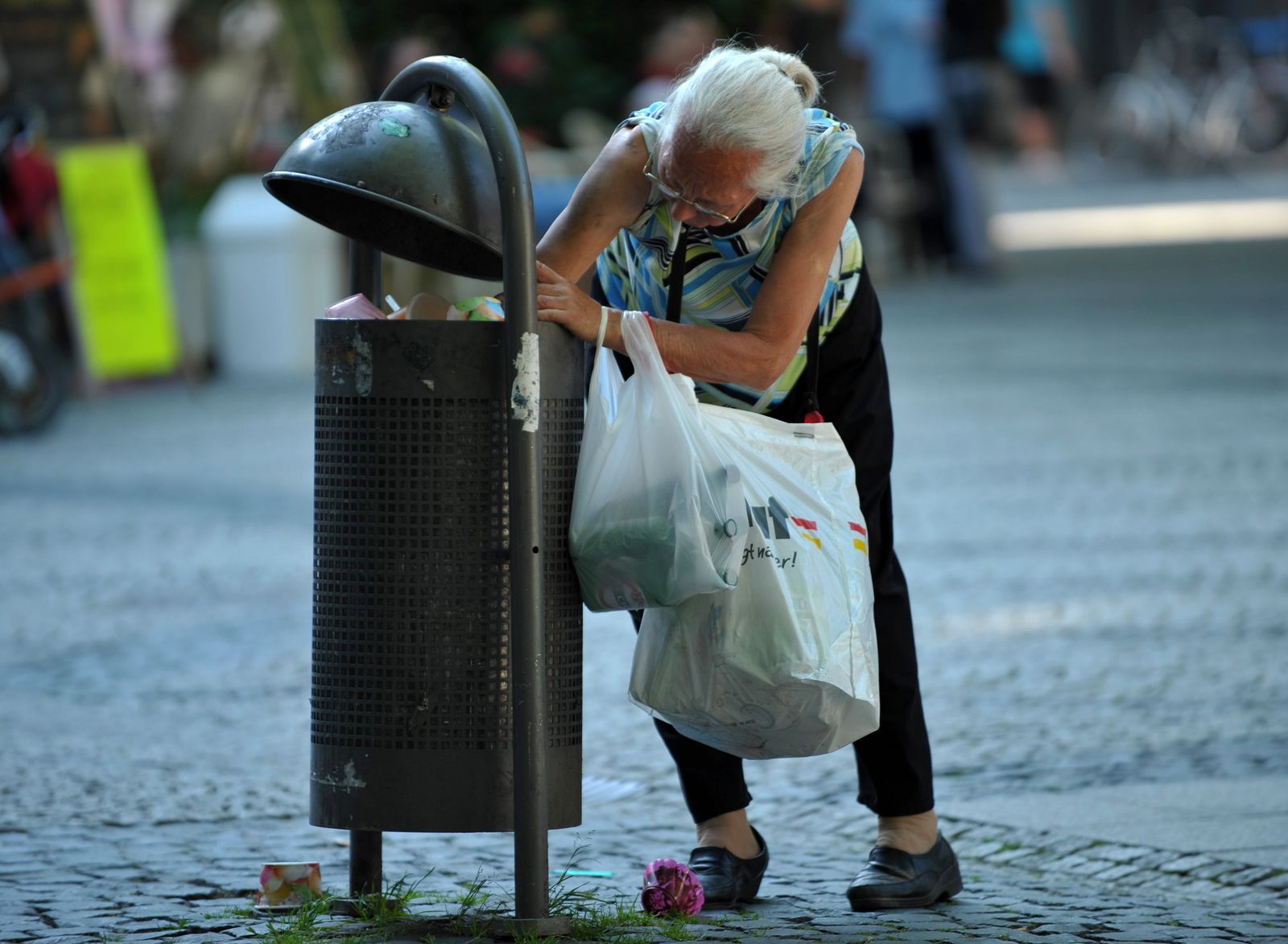 Many pensioners and unemployed people in Berlin are turning to an unusual means of supplementing their meager incomes: collecting discarded deposit bottles. They can return them to stores or supermarkets for a few cents per bottle.