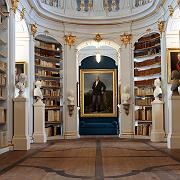 Much of the Duchess Anna Amalia Library in Weimar, in the German state of Thuringia, was destroyed in a 2004 fire.

The burnt-out ruins made a harrowing impression on eye-witnesses. Only the charred outer walls had survived the "gnawing rage of the flames," wrote Romantic poet Christoph Martin Wieland -- they were now reminiscent of "Troy laid to waste." Even Goethe shuddered at the sight of the "horrific ruins" -- all that remained of Weimar Castle after the fire of 1774.

But it could have been worse: The castle's famous book collection was spared. Duchess Anna Amalia (1739-1807) had ordered it to be moved to the refurbished Green Castle only a few years before. And the famous library named after her is still located there today. Thousands of precious books remained unscathed for more than two centuries -- only to be destroyed by a huge fire on Sept. 2, 2004. The books had been scheduled to be moved to a new depot only a few weeks later.

The fire ravaged the roof truss and top floor of the splendid Rococo library destroying 50,000 out of a total of 200,000 books, as well as many paintings and a precious musical collection. And it could all have been avoided. Library director Michael Knoche had already made an urgent plea for renovations during the 1990s. But nothing had been done by the time a damaged cable triggered the smouldering fire that became the largest suffered by any library in post-war German history.

But the real surprise came after the catastrophe: The blaze caused the general public, which had hardly taken notice of the precious little library until then, to collectively consider the value of what it had lost. The feature pages of German newspapers sounded a cultural alarm, and contemporary German poet Durs Grünbein even spoke of "worlds on fire."

The flaming books dramatically demonstrated to the Germans how quickly their cultural heritage could be reduced to ashes. And so, two years before the euphoria that would come with the 2006 World Cup, the Germans discovered their affection for their country. "In this library, one could be caught unawares by an intense love of Germany," confessed German writer Martin Mosebach.

The donations began to flow in. To date, the Foundation of Weimar Classics has received more than €10 million ($14 million) from almost 20,000 individual donors for the restoration and repurchasing of the books.

There is an ironic twist to the tale: It was Duchess Anna Amalia who founded the first fire insurance company in Weimar -- the Brandassekurations-Sozietät -- back in 1768. Her efforts to promote Weimar as a cultural location were not limited to her support for the amateur theater at the court or local musicians. The aristocratic art-lover -- part Madame de Stael and part Imelda Marcos -- was known throughout the city not only for her foible for shoes, but also for her love of books, a trait she had inherited from her father. In fact Anna Amalia regularly overspent her budget when purchasing additions to her beloved library.

Weimar's residents took fire protection seriously. During the 19th century the library was equipped with fireproof iron doors and a slide for rescuing the books. "We found the slide, an old hose with a bag at the end, on the night of the fire," says Knoche. "But it was no longer usable." The old iron doors were glowing from the heat, but they remained in place, reports the librarian, who, along with numerous assistants, managed to rescue books from the Rococo chamber and deposit them in the newly completed underground depot at the last moment.

The first folios have already been placed back on the freshly painted shelves, but the painstaking book restoration project will continue until 2015.

Only those who visit the top floor of the restored literary temple, which is recognized as a World Heritage Site by the United Nations Educational, Scientific and Cultural Organization (UNESCO), will see traces of the fire that ravaged this part of the library. The middle of the room is encased in glass and the partially charred balustrade and the soot-blackened parquet floor are visible from there.

The citizens of Weimar are now preparing for the lavish celebrations to be held this Wednesday. A festival tent with room for 1,200 people stands on the Reithauswiese, the square between the castle and the library. Television journalists will report live on the event when German President Horst Köhler makes a speech to mark the grand opening.

According to his office, the president will remind his listeners of the sorrow brought by the "irretrievable loss of parts of our culture and tradition." He will demand that politicians make the preservation of libraries part of their agenda. And he will characterize libraries as "humanity's memory," places that are still "very special" even in the digital age.

Now the educated middle class will once more be able to visit their holy shrine, while experts from the nearby research center will be able to access an internationally renowned research library. In this way, the library combines the mandate of preserving cultural heritage with the user-friendliness of an up-to-date facility.

The Duchess Anna Amalia Library has arrived in the 21st century. There is even a 3D model of the library on the Internet  a guarantee that this time it is here to stay.