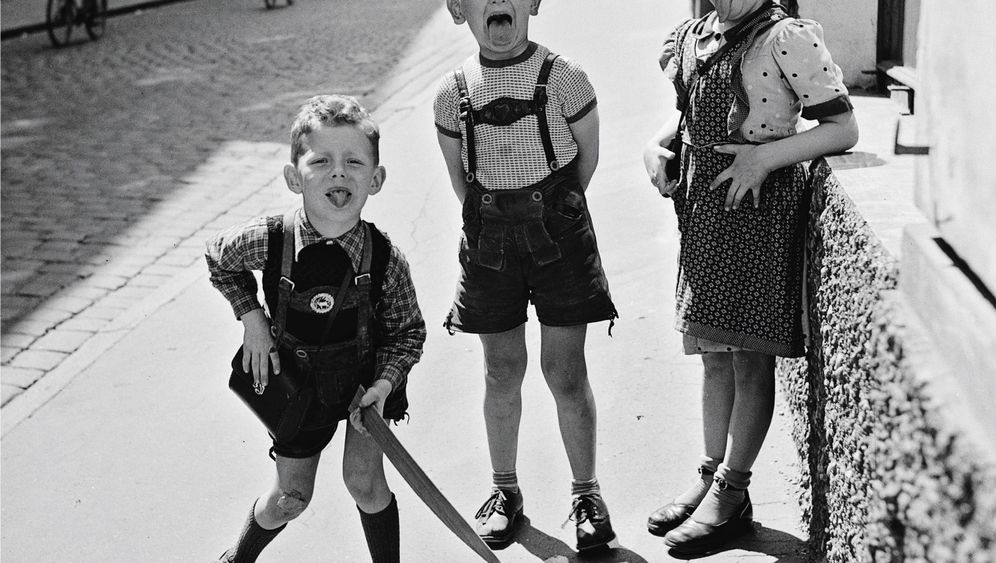 Children waving cheerfully at passing tanks, quite obviously feeling neither fear nor distrust. It is just one moment among millions in 1950s, postwar Europe, but it is one captured by American photographer Bill Perlmutter, who arrived in Europe in 1954 to take photographs for the US Army.

Not all Germans received the American soldiers so euphorically when they arrived as occupiers at the end of World War II. Although the Allies liberated the country from the Nazi regime, they were still former enemies, in a war whose trauma was far from healed.

Perlmutter captured this mood without prejudice. With his Rolleiflex camera, he set off on a journey of discovery. Throughout the pages of "Through a Soldier's Lens," the viewer accompanies him from Germany to France, Italy, Spain and Portugal. What Perlmutter had only known from the movies suddenly became his reality. "The streets became a stage and the people the actors, in a constantly changing and fascinating theater of reality," he recalls.

The pictures of children particularly reflect the curiosity and candor with which the young GI, away from the US for the first time, dove into his new role. On a dreary German street, he captures two little boys and a girl making faces and sticking out their tongues.

An Italian Bombshell and a Hitler Doppelganger

The series of photos taken in Germany shows a country that, from among the rubble, longs for the normality of everyday life. But one of Perlmutter's street scenes shows just how much things have changed. In the photo, two women carry a dark-skinned child in a satchel -- a so-called "GI baby." Near them stands a one-legged man with a crutch, most likely a war veteran. The next photo shows a man driving a Messerschmitt Kabinenroller, a three-wheeled microcar manufactured in the 1950s and based on an invalid carriage designed by the Nazi air force. The next shows an Adolf Hitler doppelganger, his mustache trimmed just like the man who had just led Germany into disaster, his tragic pose more reminiscent of Charlie Chaplin.

Along with ordinary citizens, Perlmutter photographed famous people like Winston Churchill, who, as the honorary colonel of a British regiment, took the time to pose for the American photographer near the former concentration camp at Bergen-Belsen. In Italy, Perlmutter got himself thrown off a film set when he photographed the unpredictable diva Gina Lollobrigida without her permission while she was taking a bubble bath at Rome's Cinecittà film studio.

In between are impressions from Perlmutter's trip to his dream city of Paris, where he photographed topless dancers at the Crazy Horse nightclub, sword-swallowers, young lovers and a souvenir seller under the Eiffel Tower.

But Perlmutter was most impressed by Portugal. A group of girls in headscarves dance on the beach, their traditional dresses giving them the appearance of something out of the 19th century. The pictures show simple fishermen, women at the market, girls slinging raffia baskets and the barren, rough coastal landscape. Many decades later, in 2002, Perlmutter returned to Portugal and found hardly a trace of the timelessly archaic world he first fell in love with. The fishing boats now have motors. Tractors have replaced the old ox-cart. But in Perlmutter's photo collection, time stands forever still.

An exhibition of Bill Perlmutter's photographs will be on display at Galerie Hilaneh von Kories in Hamburg until August 15, 2013.