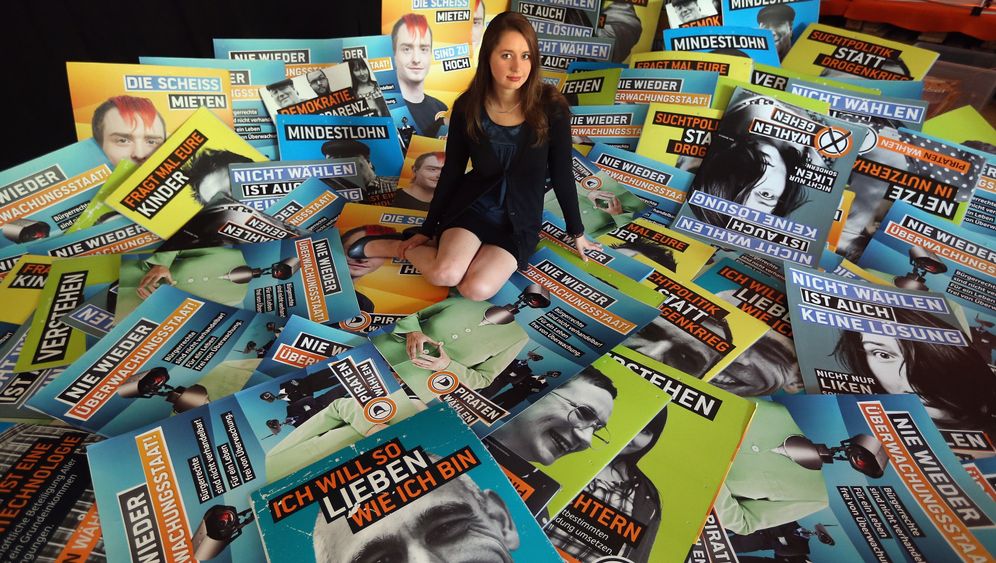 Photo Gallery: The Struggles of the Pirate Party

The Pirate Party's headquarters resemble a cross between a warehouse and a tool shed. Empty bottles are gathering dust on the floor; scruffy arm chairs and abandoned flip charts are scattered around the room. There is evidence of organization, too: campaign posters have been divided into piles according to the districts they are set to be distributed in.

As a part of their election campaign, the Pirates have been inviting journalists to their headquarters, situated in Lichtenberg, a low-income area in eastern Berlin. At press conferences, the Pirates have been lecturing them about data protection, surveillance drones, football fan rights, basic income and copyright law. But the number of those willing to listen is shrinking.

Despite the party's waning credibility, party leader Bernd Schlömer believes that the party will achieve the five percent vote share required to take seats in the German parliament, the Bundestag. Earlier this week, Schlömer stated that the official goal was to receive 6 percent of votes at Sunday's general election. He even promised to buy a round of beer for guests at the subsequent election party.

It seems unlikely that Schlömer will have to loosen the purse strings, though: the majority of election polls are placing his Pirates at 2.5 percent. Even the anti-euro Alternative for Germany (AfD), another new arrival on Germany's political landscape, is in a better position.

Though the party had set out to revolutionize the country's political system -- an effort it referred to as "Politik 2.0" -- it looks unlikely that it will even receive over 2.0 percent of the vote. In the Bavaria and Lower Saxony state elections, which are considered an indication of things to come on a national level, the Pirates received 2 percent respectively.

The party's waning popularity is surprising, considering the NSA revelations during this year's campaign season could have dealt them the perfect hand. For months, the Pirates' core topics -- data protection first and foremost -- featured heavily on the country's political agenda. Other conditions, such as the public's growing disaffection with the mainstream parties, could also have worked in its favor. But the Pirates failed to capitalize on their status as an alternative to the increasingly homogenous mainstream players.

The Pirate Party did try to make the best of these conditions -- for months, volunteers worked hard to campaign on a tight budget. Sometimes clever, sometimes bland, the Pirates' campaign posters seem to be everywhere. Daily press releases received hardly a mention in the German media. Party leader Schlömer made an appearance on a cooking show -- his policy coordinator Katharina Nocum even appeared on television alongside popular German talk show host Stefan Raab.

The fact that the Pirates are not resonating with voters, then, is not for a lack of trying. So what are the reasons for the party's waning appeal?

If recent polls are to be believed, the Pirates may soon be demoted to their former status as a splinter party. How will the party deal with its failure? Many members are already thinking about their future beyond the September 22 election. The three percent threshold required to enter the European parliament may allow the Pirates to win seats at next year's European election. The Pirates' regional chapters are likely to push ahead with campaign efforts.

An exodus of party members is unlikely -- those keen to leave already did so months ago, when the Pirates were suffering the height of their public humiliation. Several members of the party's leadership may announce their resignation at a party conference taking place this winter. One or two might even realize their secret ambitions of joining other parties.

Before party members can start making plans for their future, there is the Sunday election to think about. The party will continue waging its election campaign, however bleak its prospects.

This week, a long-haired representative of Germany's Hemp Magazine turned up at the Pirates' headquarters -- he had narrowly missed a press conference on the topic of drugs and addiction. After a mumbled apology, the journalist asked the press officer to recap everything that had happened.

While others may have dismissed the late-comer, the Pirates' press officer hurried to help, digging around for a folder containing the relevant information. Starting all over again is, after all, something that the party will have to get used to after Sunday's election.