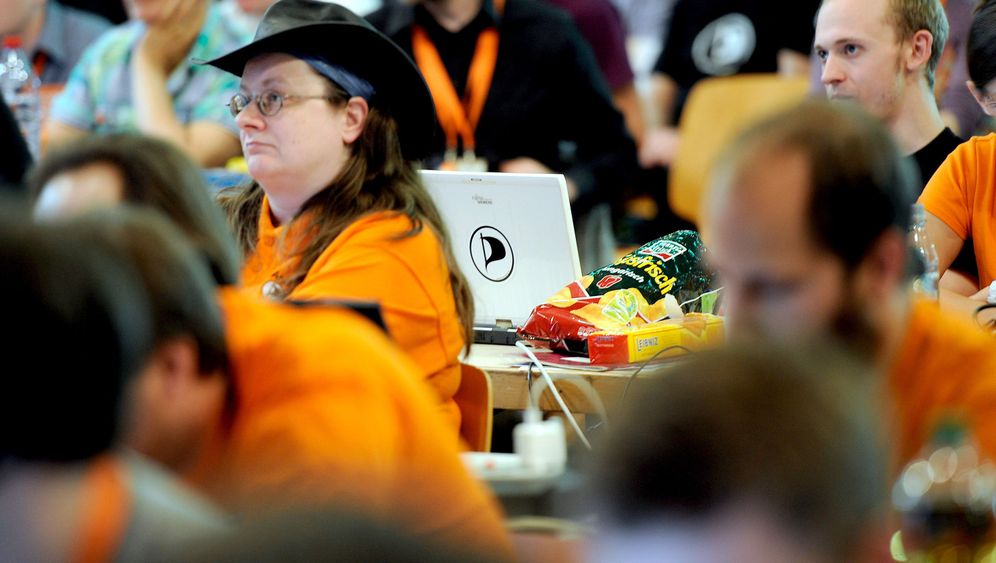 In theory, Germany's upstart Pirate Party should be benefiting from the political zeitgeist. The Green Party, the business-friendly Free Democratic Party (FDP) and the center-left Social Democratic Party (SPD) are all embroiled in leadership debates. Despite a new leadership duo, the left-wing Left Party is deeply divided. And Chancellor Angela Merkel, the head of the center-right Christian Democratic Union (CDU), is distracted by a whole slew of problems, foremost among them the ongoing euro crisis. All of this surely prompts voters to start looking for alternatives. One would think it would create ideal conditions for the Pirate Party.

But after enjoying surprising success in a series of state elections over the last year, the party, which campaigns for Internet freedom and political transparency, has recently been flagging in the polls. On Friday, a new opinion poll by the German public broadcaster ZDF put support for the party at just 6 percent, its lowest level since March. Another survey recently conducted by the Forsa research institute found that the Pirates only enjoyed 7 percent of the electorate's support, down from 9 percent in July. Indeed, it would seem that the up-and-comers are losing a bit of their magic.

The Pirates themselves are playing down the poll numbers. "We don't have any problem," party boss Bernd Schlömer told SPIEGEL ONLINE. But polling experts say the party is in freefall and that it may struggle to get the 5 percent of the vote it needs to win seats in the German parliament, the Bundestag, in the 2013 national election.

There are five reasons why considerably fewer people would vote for the Pirates today than would have just a few weeks ago. The first has to do with the fact that the party is producing more problems than debates. Brutal infighting is part of the party's daily routine. The Pirates, which are known for their obsessive use of the communication software Liquid Feedback, write such squabbles off as part of their trademark "open communication culture" which by necessity sometimes also includes arguments.

Admittedly, their basic approach is appealing: What other party streams the meetings of its national committee live on the Internet or allows people to watch sessions of its parliamentary groups? Is there another party where it's possible to find its members' cell-phone numbers via a Google search? But the constant chatter of the crowd also has negative consequences: It makes it difficult for the party to be taken seriously as a political actor.

From their chaos of discussions and ideas, the Pirates have yet to extract a single political debate on social issues. There have been plenty of missed opportunities. Many in the party reject gender stereotypes, but the party has remained noticeably silent in the recent debates on child care subsidies for stay-at-home parents or equal rights for same-sex couples. There is currently a flurry of criticism of the luxurious lifestyle of the bishop of Limburg, but the Pirates have kept mum on the issue, despite their skepticism toward organized religion. Nor has the party taken advantage of the euro crisis to further its advocacy of having more citizen participation in government.

What's more, the party has alienated many intellectuals, artists, writers and musicians -- who would seem to be natural supporters of such a party -- by advocating loose enforcement of intellectual property rights and calling for all digital content to be deregulated.

The second reason for the Pirates' doldrums is their lack of vision and strategy. At the moment, there are 35,000 card-carrying Pirate Party members in Germany, party organizations in all 16 federal states, a handful of highly involved string-pullers and countless meeting and working groups. Several thousand online initiatives are supposed to help delineate and expand its platform, and there are very active networking activities afoot. All of this is meant to serve the party the public's attention on a silver platter.

But it is still unclear where this journey is leading, and the party can't answer the relevant questions. "A unified strategy is not observable," Klaus-Peter Schöppner of the Emnid opinion-research institute told SPIEGEL ONLINE. Although his organization once put support for the party at 13 percent, it has now dropped to 8 percent. "The Pirate phenomenon was so fascinating at the beginning," he says, "but people are ultimately yearning for strong individuals who want to take responsibility and stand for something. The model of an ominous, gray mass quickly loses momentum."

The third reason behind the Pirates' malaise is the fact that mishaps are taking their toll. When Schlömer, the party boss, called upon the 45 Pirate representatives in state parliaments to make a financial contribution to the party's national organization, he slammed against a wall of refusals. So the issue of solving the party's massive money problem was just put off for another day. But this means that many party candidates will lack the funds they need to run professional campaigns for next year's federal and state elections. What's more, almost half of the party's members have yet to pay their annual membership fee.

In addition, the Pirates must combat a problem that has already plagued the established parties for some time: bridging the gap between party leaders and the electorate. Forsa head Manfred Güllner points out that some party supporters might have been put off by recent reports that a prominent Pirate, Johannes Ponader, had been living off benefits for the long-term unemployed, as well as by a controversial donation drive to provide an income for Ponader. "The debate over Ponader has definitely hurt the Pirates," says Güllner.

Judged According to Their Results

The fourth problem is that the Pirates don't really know what they stand for. The Pirate Party now holds seats in four out of Germany's 16 state parliaments, occupied by current university students, veterans of the student protest movements of the late 1960s, teachers and even a fireman. A year ago, no one would have thought this possible. But there is now a general feeling of uncertainty about what they are really aiming for with their parliamentary work. Though they are calling for transparency, citizen participation in political decision-making and civil rights, much of this remains abstract and fuzzy. "There is still a large number of potential Pirate voters among the disaffected and non-voters," Güllner says, "but the Pirates are now being judged according to their results."

Recently, three Pirate members of the North Rhine-Westphalian parliament triggered an uproar by filing a legal complaint against Norbert Walter-Borjans, the state's finance minister, charging that his office's purchasing of CDs containing confidential information about potential tax cheats is illegal. The fact that the three took action without the blessing of the larger party organization has been heavily criticized within the party, especially since the public ultimately associates the action with the Pirates as a whole.

Meanwhile, rival parties are throwing punches as well. Wolfgang Kubicki, the powerful head of the FDP's parliamentary group in the northern state of Schleswig-Holstein, recently lost his patience with the newcomers in a very public manner. He accused the Pirates, who gained seats in the parliament after the state election in May, of making "show proposals" so as to mask "their policies' complete lack of content," and he scolded them for denouncing the other parliamentarians and suggesting that they were meeting in secret behind closed doors. "We aren't in a children's play group here," he said.

The Pirates have also faced open criticism in other state parliaments, as well. Corinna Gödecke, the head of the North Rhine-Westphalian state parliament, recently wrote a letter complaining about how Pirate parliamentarians dressed, urging them to show a "minimum of respectability." Tom Schreiber, a member of Berlin's city-state parliament with the SPD, also lost his cool after a Pirate representative attended a committee meeting wearing "practically underwear" -- or, in this case, Bermuda shorts. "Since the Pirates have been around, the optical decorum has lapsed, and it's undignified," Schrieber told the Berlin daily BZ in June.

These kinds of attacks will only increase during the campaign season for Bundestag seats, and the Pirates currently have little to fight back with. "They have become more visible," Güllner says, "but they are also more exposed to attack."

The fifth and final reason is that the novelty of the party is simply wearing off. The election campaigns have exhausted certain segments of the party, and many of its core members are now busy with drafting the platform and general organizational tasks, which have less external resonance than campaigning activities. "The state elections in the spring attracted a lot of attention," says Güllner, the Forsa head. "It was to be expected that their approval ratings would fall back after a while."

In Güllner's view, it's still anybody's guess whether the party will surpass the 5 percent hurdle needed to get seats in the Bundestag. Schöppner, the pollster from Emnid, agrees and also believes that this is only the beginning of the party's downward spiral in the polls. "I don't think the Pirates can hold on to the 7 to 9 percent they have now," he said, speaking before Friday's new ZDF poll was released. "Things are going to get very tight for the Pirates during the Bundestag elections."

And what do the Pirates think themselves? They react calmly to all the fuss. "We don't pay attention to opinion surveys," says Pirate Party head Schlömer. "Hence from our perspective there are no problems."