Senior members of Germany's opposition center-left Social Democratic Party (SPD) have criticized the party's planned expulsion of Thilo Sarrazin, the Bundesbank official who caused a public outcry by saying Germany was in decline because of the rapid growth of its Muslim immigrant community.

The SPD's leadership voted on Monday to begin proceedings to exclude Sarrazin from the party in response to his comments. But surveys indicate that a majority of Germans agree with the firebrand politician, and many SPD members have contacted the leadership saying they want him to remain a member.

An opinion poll conducted by the Emnid polling institute on behalf of the Bild am Sonntag newspaper found that 53 percent of Germans believe Sarrazin should stay in the SPD. Among SPD supporters, the share is even bigger, at 56 percent.

A number of top SPD officials past and present have criticized the planned expulsion. "I would keep him," Peer Steinbrück, a former finance minister, told SPIEGEL, adding that even though he would never have said what Sarrazin expressed, throwing him out would not solve Germany's integration problems.

SPD board member Martin Schulz told the mass-circulation Bild newspaper that excluding Sarrazin from the party would play straight into his hands. "We should focus on the issues Sarrazin is talking about, and not so much on him as a person," said Martin Schulz, the chairman of the Social Democrats' group in the European Parliament.

Peter Struck, the former head of the SPD parliamentary group in the Bundestag, said: "I would have made clear: This is the personal opinion of Thilo Sarrazin. And then one could have left it at that."

Paid off with a Pension Hike

Sarrazin espoused his controversial theories about Muslim immigrants in his book "Germany Does Itself In" which has become a runaway bestseller since it was published two weeks ago. He agreed last week to quit as a Bundesbank board member after the bank said it would ask German President Christian Wulff to dismiss him.

Sarrazin's voluntary departure has spared the Bundesbank and Wulff a potentially embarrassing and lengthy legal challenge to a dismissal. SPIEGEL has learned that he agreed to leave in return for an increase in his pension by €1,000 ($1,280) a month. But he is unlikely to quit the SPD of his own accord after almost 40 years of membership.

Sarrazin has become a major problem for the SPD. It is unclear whether the expulsion will succeed. Germany has strong laws on freedom of opinion and party evictions can be drawn-out affairs. The SPD faces months in which the issue will keep coming to the fore.

The controversy has turned into a tough test for SPD leader Sigmar Gabriel and put a stop to the party's recent impressive gains in opinion polls. The SPD fell by two points to 25 percent in the weekly poll by the Forsa institute published last Wednesday.

Gabriel knows that he acted rashly in demanding that Sarrazin be thrown out of the party. He knows that many people who haven't read the book have gained the impression that Sarrazin is being unfairly punished for voicing uncomfortable truths about the lack of integration of many of Germany's 4 million Muslims.

Sarrazin's book contains controversial statements like the following: "From an economic point of view we don't need Muslim immigration in Europe. In every country Muslim immigrants cost the state more in terms of their low employment and high use of welfare benefits than they generate in added economic value."

"Among Arabs in Germany, in particular, there is a widespread tendency to have children in order to receive more social benefits, and the women who are often imprisoned in the family basically have hardly anything else to do."

To back his claim that Germany's average intelligence is destined to decline, Sarrazin cites research that between 50 and 80 per cent of intelligence is hereditary. He combined that with statistics showing that poorly educated Muslim immigrants had a far higher birth rate than ethnic Germans. The result, Sarrazin argues, will be a steady dumbing down of the German population.

Unlike the Bundesbank, the SPD doesn't have the option to pay Sarrazin to quit. It has to evict him using the party's complex expulsion procedures, which have high hurdles to forcing out recalcitrant members. Talking nonsense is not enough to get a member expelled. He must also have damaged the party's political credibility. This is the problem: Sarrazin didn't write his book in his capacity as a party politician. His lawyers might argue that the damage to the party only happened when Gabriel moved to evict him.

Despite the internal opposition to an expulsion, Gabriel has argued forcefully and eloquently in favor of it.

"Almost everybody who is now cheering Sarrazin hasn't read the book, or hasn't finished it," Gabriel said in an interview with Bild am Sonntag published this weekend. "The really terrible thing is that he wants to return to the state-controlled eugenics policy of the start of the 20th century."

Gabriel said Sarrazin made no mention in his book of the "catastrophic consequences" of this policy.

"This nonsense led to the sterilization of 60,000 people in Sweden in the 1930s, just because they were regarded as 'asocial,' for example, and their genes weren't wanted," said Gabriel. "And he didn't see fit to devote a single sentence to the fact that in Germany the perversion of these theories he is now reviving led to Auschwitz." 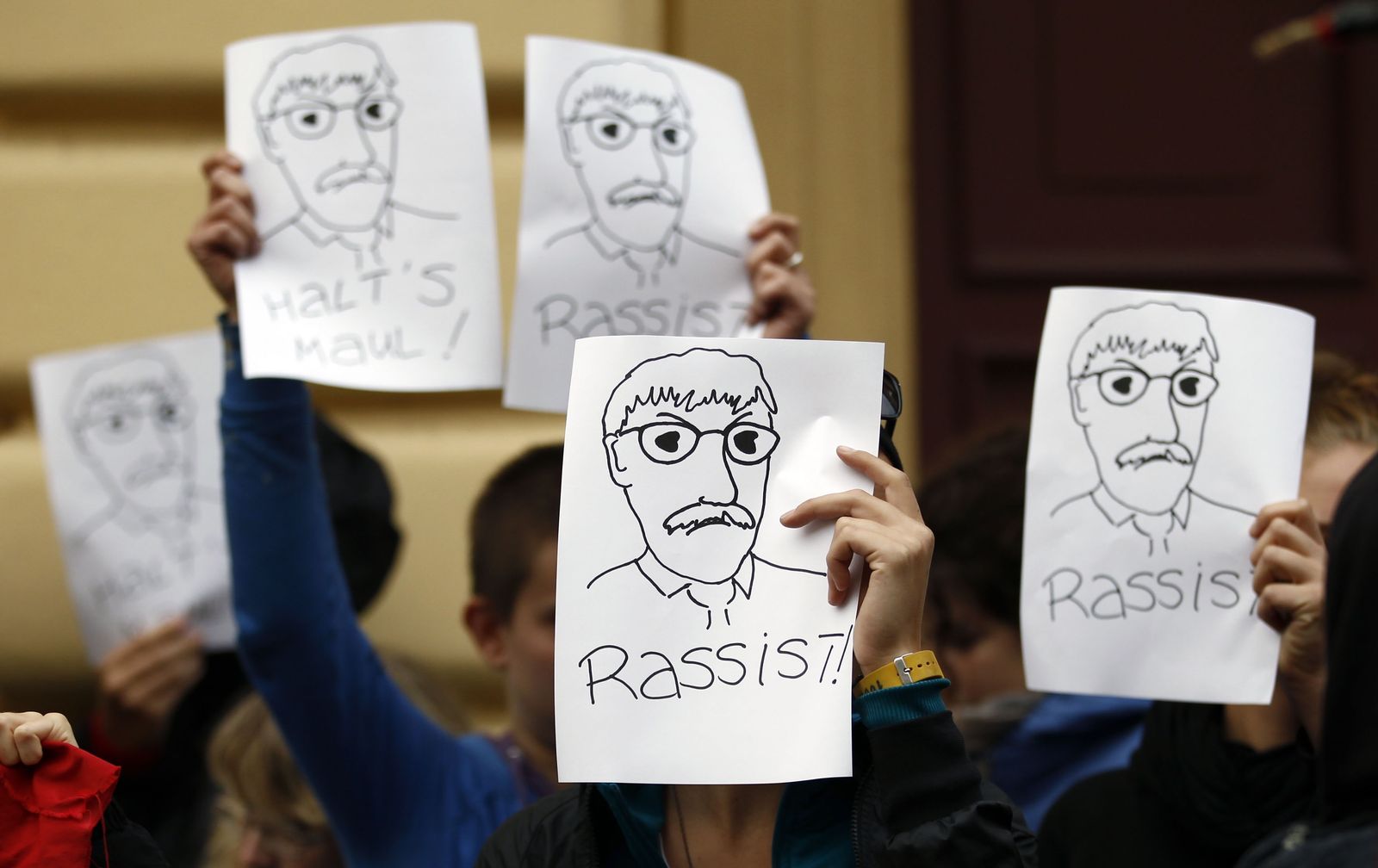 Demonstrators at a Potsdam, Germany, reading held by Thilo Sarrazin hold up protest signs with the German spelling for "racist." This opinion, however, has not been universal here.